Apologies to anyone who wanted a shory Poddlers’ Ride this morning….but after six excuses for not cycling from fellow Poddlers’ (ranging from the cat ate my bike to I’ve an operation to oversee via a credible true reason it’s too cold and I don t feel like cycling) I decided there would be no takers at Hornbeam and pedalled off on my own.

Knaresborough, Scotton, Breaton loop, Mount Garratt’s Garden extra loop with it’s new field of solar panels, a cup of coffee at Ripley which will reopen Easter 2020 after a final fling this weekend,  down the Greenway with a person on an orange bike behaving as if he had total rights to the path.  Another glorious golden morning…a pleasant 20 miles. Caroline G 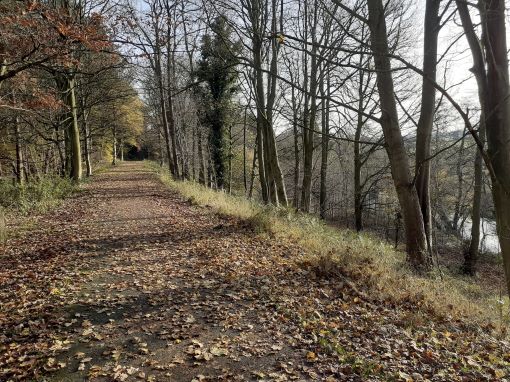 A big turnout on an, initially, cold and slightly murky morning. Twenty-two of us split into three groups and warmed up via Little Almscliffe and Menwith Hill. Stripe Lane finished the warming up process followed by refreshments at Fiddler’s Green. We emerged into lovely sunshine and enjoyed the views passing Brimham Rocks and cruising back down to Ripley and home. Marwood S 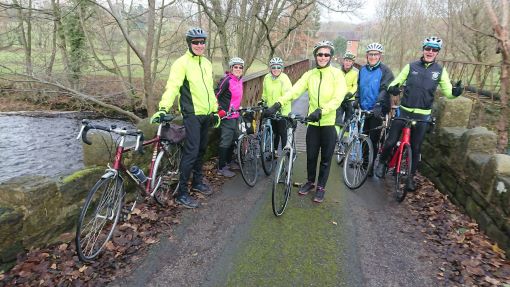 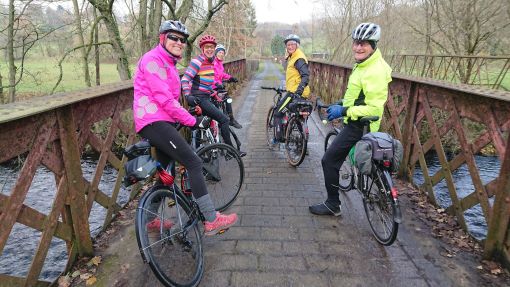 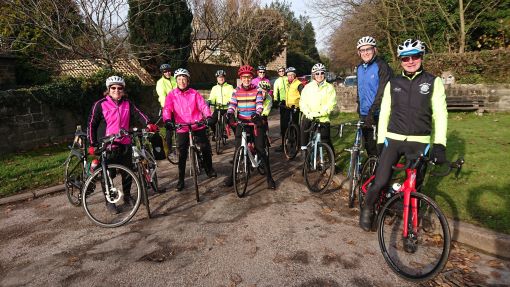 Despite the cold ,damp and a little misty conditions, a good number of riders turned up this morning for Mike and Marwoods ride to Brimham. Breaking into three groups I rode with Mike in the ‘brisker’ group. Ten of us departed Hornbeam and headed for Beckwithshaw. It was chilly but our body temperatures were rising as we got to Little Almscliffe. A couple of people removed their outer layers.

Safely crossing the A59 and onto Menwith Hill and Darley. The slight mist was rising over Nidderdale which resulted in splendid views. Down to the Toll Bridge and then the slog up Stripe Lane. It never seems to get any easier. Lunch at the Fiddlers. We were under pressure to depart our seats as the next group of WE arrived and started hassling us. The usual banter was exchanged between us.

On to Scarah Bank and Ripley as the skies brightened. Back along the Greenway to Bilton Lane where we started to split up for our respective routes home. Great ride. 34 miles and Margaret made it without taking a wrong turning. Well done !! Colin B. 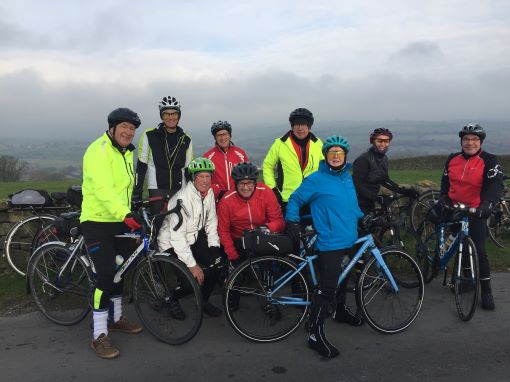 Two groups Whatsapped (sp? new word?) and agreed to meet in Wetherby for cafe stop. Five of us headed out to Brackenthwaite Lane finding the hills to warm us up, helped along by a rapidly improving day with plenty of sunshine.

Along Briscoe Ridge to Stainburn, Almscliffe Crag, Huby, Weeton, Dunkeswick and finally with half an hour to meet the other group we rode to Kearby, Sicklinghall and met up in the Shambles where the other group were sitting outside enjoying a coffee. All nine of us squeezed in to a new for us cafe nearby, Costellos. Nice run home, good temps and something in the ride for everyone. 35 miles for the longer run and probably about 25 for the others. Gia M 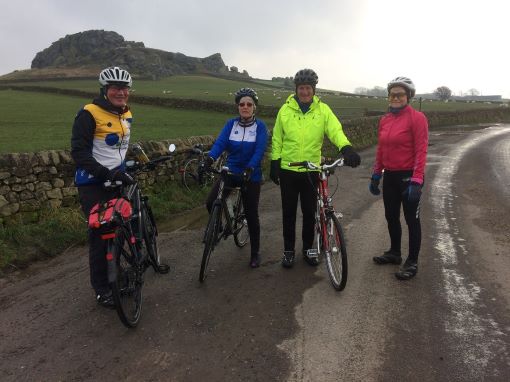 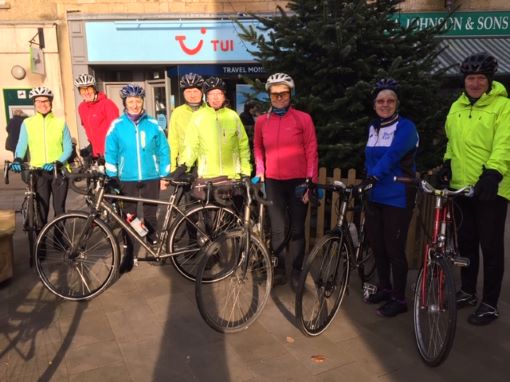 Today was a long ride in name only, being around 45 miles and finishing well before darkness at around 2.00 pm.  But the eight riders found enough challenges for legs and lungs to justify a good early lunch at Fewston Farm Shop cafe, which we enjoyed with the sun streaming into the cafe’s windows.  The steady improvements in the facilities are welcome, although the soup could have been a lot, lot, hotter!

Earlier, seven of us, including a sun-soaked Angela full of hilly Greek miles, had set out from Hornbeam to be joined in another very welcome return to the fold by John Sewell, who caught us on Leadhall Lane, mounted on his hi-vis winter bike, the colour of which can only be described as somewhere in the region of shocking, salmon or lobster pink.  Breaks the ice at parties and gets people chatting!

We headed out through Burn Bridge and up to Kirkby O before dropping down to A61 and a reasonably easy turn for Weeton and Castley.  Once again on a Wednesday in the vicinity of Burn Bridge, we came across a black car with police motorcycle escorts, blue light and all.  Is this a regular shuttle on a Weds by someone whose name we cannot mention?

Askwith bank up to the moor provided us with some real exercise in the now-clearing late autumn weather.  A brief conference at the Timble turn opted for the Fewston cafe rather than McKenzie’s Smokehouse, for which we thought we might be underdressed.

After lunch, Andy and John opted for a quick return via Pennypot while the rest of us headed north to Menwith, to then turn eastwards towards Clapham Green and the swoop down to Hampsthwaite.  Here Graham departed towards Killinghall, with the remaining five climbing to Clint and the Greenway back to Ripley, which was clearly in a state of getting ready for a big event soon.  Vans and lighting rigs everywhere, with the field laid out in caravan pitches.  Back along a rather slippery Greenway to Bilton, your local Sustrans rep noted this as a likely venue for the next working party on 10th December.  Back well before dark and before the now-customary afternoon chill sets in, it was short sweet winter riding.  More to come, I’m sure. Terry S

The EGs met us usual at 10am at Low Bridge, but no need for the usual discussions on where, and how far, the A team and the B team would be going.  Today all our thoughts were with Dave Watson, and how we could squeeze in a short ride and get back to Knaresborough by noon for the funeral of Dave’s wife, Pamela, at St John’s Parish Church.   The A Team’s circuit was via Farnham, Copgrove, Burton Leonard, Wormald Green, and Brearton, and the B Team’s circuit was a little shorter.  We all met back in Knaresborough at 11.20 for coffee at the closest establishment to the church.  Thirteen EGs attended the service, including two who have not been out with us in recent months: Terry W, who returned from his residency in South Yorkshire, and Phil P, still recovering from his serious cycling accident earlier this year, and who will not be back on his bike until March – nearly 12 months out of the saddle!  It was very good to see them both again, and we all continue to wish Phil a full recovery.

The service was a delightful tribute to Pamela, and mention was made of the love, care and devotion of Dave who has nursed Pamela 24 hours a day for the last two years.  During that time Dave’s only respite has been his Wednesday rides with the EGs, when he arranged for carers to cover his absence for a few hours, but even then all Dave’s rides were cut short.  Music had been an important part of Pamela’s life, and the music and hymns throughout the service were a fitting reflection of this.  With the EGs dressed in their Lycra, it is doubtful whether there was ever such a colourful funeral service in Knaresborough!  After the service, we joined Dave’s family and friends at the Dower House for refreshments and chat.

Home by 3.30pm. 29 Harlow Hillbilly miles covered, but today was not about miles.  It was about Dave and Pamela, and now we look forward to seeing Dave out on the bike again, rebuilding his strength and fitness, and leading the EGs once again along lanes that nobody knew existed!  Very best wishes, Dave, from all of us! Eric W