A surprising ten cyclists turned up to take part in the short ride today, with fair weather to help us on our way. We enjoyed a few uphills and downhills and travelled to Burnbridge, Kirkby Overblow, Sicklinghall, bridlepath to Stockeld Park, then a stop at Spofforth, where we enjoyed refreshments at the Castle Inn. (Picture).
Gordon did a sterling job of negotiating through the narrow gate on his recumbent at the start of the bridlepath, even though we dismounted, in readiness to lift and finagle his craft, should this be necessary. Phew!
After refreshments at the pub, comfort breaks were taken to enjoy the ‘artwork’ in the toilets, which are recommended for any future Wheel Easy members who may be interested!
After the break, on to Follifoot and back to base at the Yorkshire Showground. Thanks to John for being kind enough to back mark. Sarah Everson 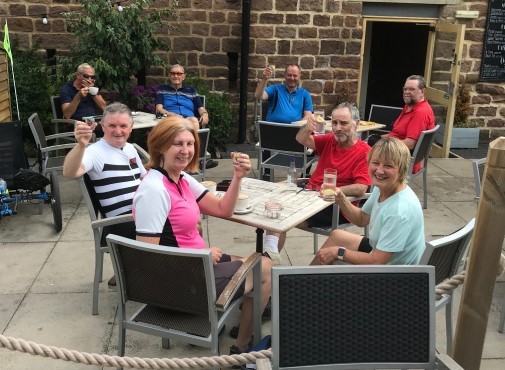 Medium Steady – group 1
Lots of cyclists at the showground today despite the temptation of an Awayday.  Our lovely group of 7 set off together and stayed together at a good pace enjoying a pleasant route and a refreshing breeze through Cowthorpe and Thorpe Underwood, stopping for a group photo at Little Almscliffe.  We pushed on through the Dunsforths and Aldborough to a lovely pause-café at Bean in B’bridge where we discussed the possibility of bike relay races, substituting a cake on a plate for the baton… We skipped on through Minskip and opted for the Beryl Burton way back to Harrogate.  Most of us completed about 40 miles, 1,700 ft and beat the storms heading our way. Yvonne D. 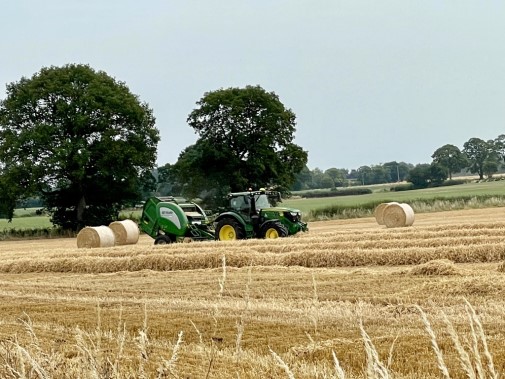 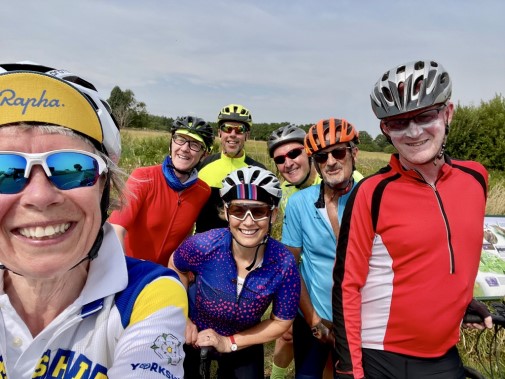 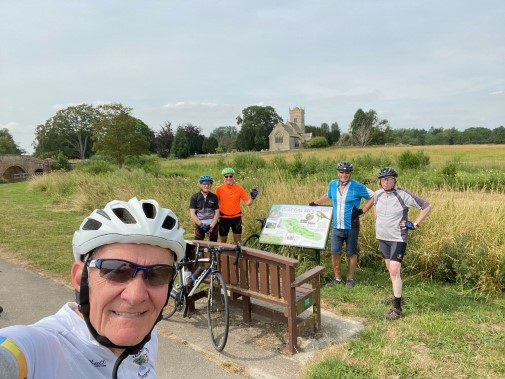 After the heat of the last two days the weather today was near perfect for our group of six. Under the stewardship of Mike W we made good time through the villages to Cattal. One of our group decided to depart to make his own way while the remainder pushed on to Great Ouseburn where we had our photo shoot. Reading the information board sparked interest in finding a monument that was marked to indicate the source of the Ouse. Interesting but we decided to hold that for another day. Pushing on through the Dunsforths and Aldborough and Plenty@Boroughbridge beckoned. We got there and and grabbed the last outside table just as group 3 arrived. Service was quick and appreciated. Suitably refreshed and as the weather warmed up a bit we headed for home taking the usual route through Minskip and Stavely. Into Knaresborough and Mike P and myself headed for home while Mike W John and Stuart could look forward to the climb out of Knaresborough. Thanks to all for their company and to Dave K for selecting a perfect route. 36 miles for me. Colin B 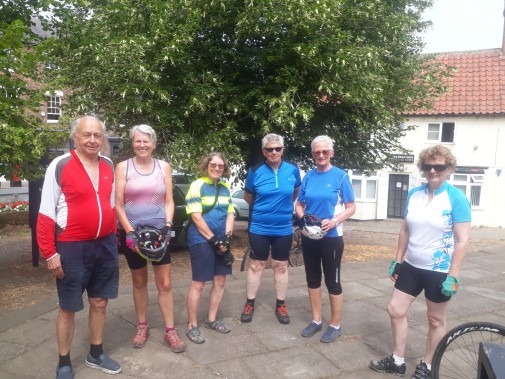 There were 18 Wanderers today so we split into 3 groups. The ride was to Boroughbridge via Spofforth, Little Ribston, Whixley, Great Ouseburn and the Dunsforths. All the cafes in Boroughbridge were very busy and short staffed so we ended up split between several cafes having ‘takeaways’. The return journey was via Minskip, Staveley and Farnham. 37 miles. 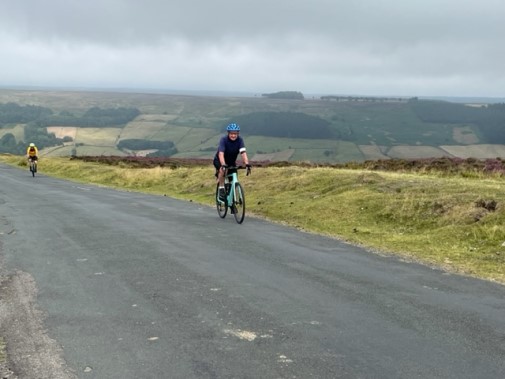 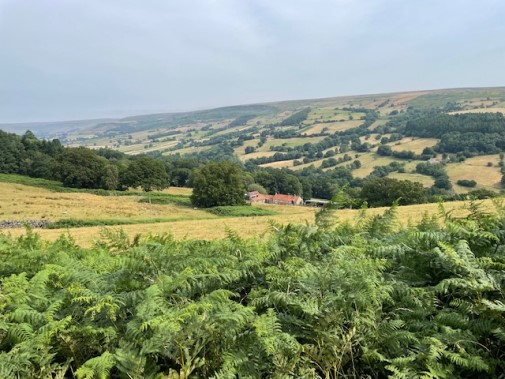 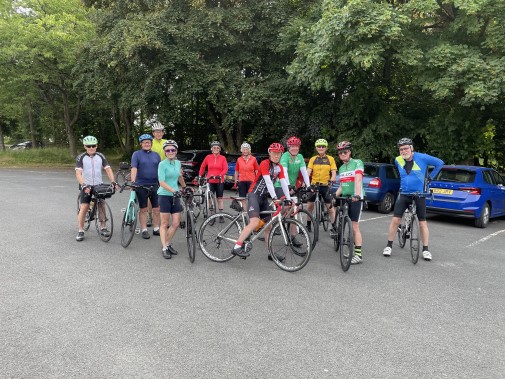 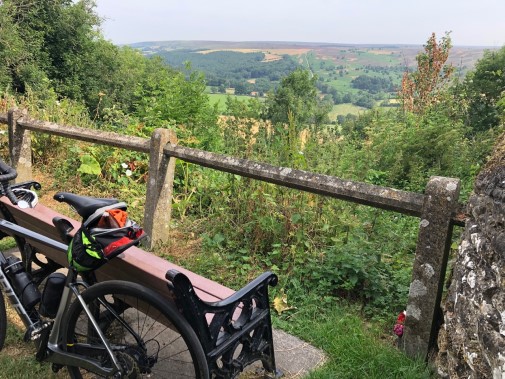 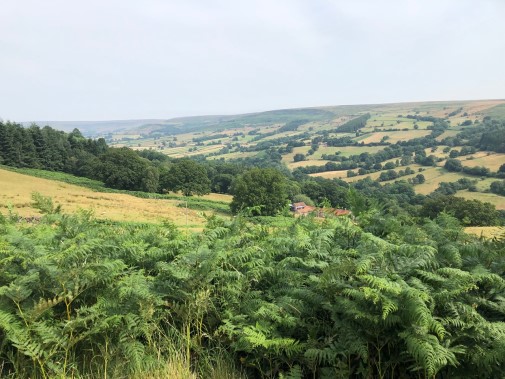 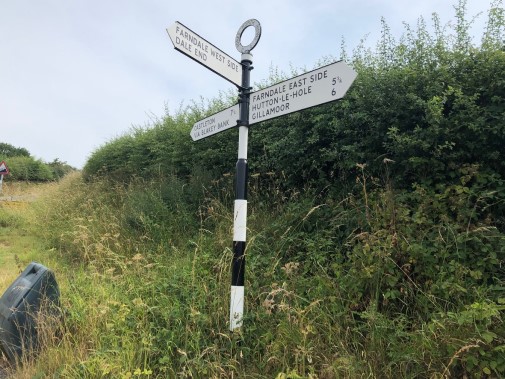 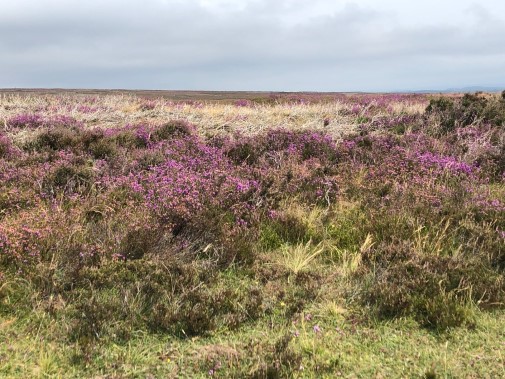 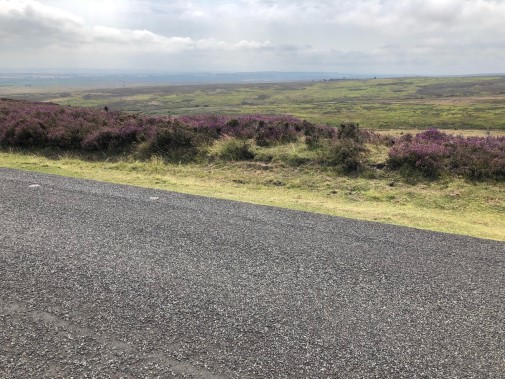 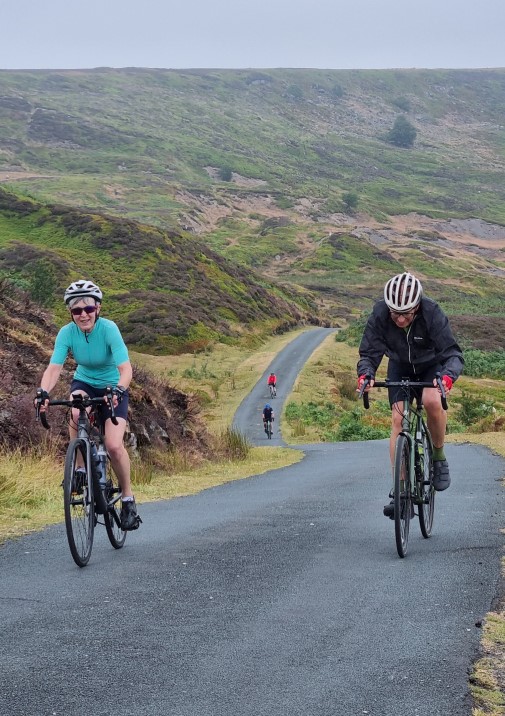 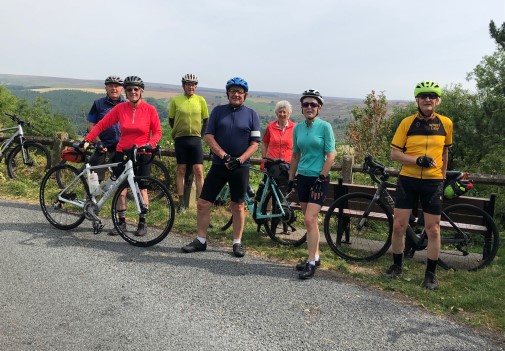 This may go down in the history of Away Days as one of the hardest routes we have ever done. If you enjoy sporting ascents, exhilarating descents, quiet roads, wide open moorland and stunning views – this is the ride for you!

After three days of boiling heat and sleepless nights, some of us we’re feeling a little bit tired and grumpy this morning but that was soon dispelled by the undaunted, cheerful souls who turned up for the Away Day. The temperature had plummeted to a very pleasant 23 degrees C with a south westerly noticeable breeze. There were four Fast Boys who disappeared first, only seen again briefly, leaving the café as were arriving. Our group had dwindled to 8, do we rode as one, all moving at our individual speeds and re-grouping from time to time. To name names, we were Keith and Me, Gia, Kevin, Mike S, Monica W, Tim R and Doug. Doug is still relatively new to the area and was curious to see what North Yorkshire looks like – he now knows!

The start was easy enough, with a pleasant meander through Kirkbymoorside, up to Gillamoor and in to Farndale, taking in breathtaking views in dappled sunshine. Then it was the first challenge of the day – that hill out of Farndale and up on to Blakey Ridge. There was some occasional touching of tarmac but I always say a walk is as good as a rest and it stretches out your hamstrings and calves so it is a “good thing” and quite a convincing excuse. The wind was really very strong along Blakey Ridge and we were all relieved to descend into Westerdale, on to Castleton and along the Valley of the Esk. Much to the relief of the whole group there was only one last climb up to the Yorkshire Cycling Hub in Great Fryupdale where reserved tables and a varied menu awaited our attention. You could of course opt for the Great Fryup Full English Breakfast if you were of a strong disposition and hadn’t spotted the steep climb out of the dale on to Danby High Moor. The Cycle Hub is a great place, in the middle of a beautiful, remote dale – and they have a nice shop, selling Stolen Goat gear.

On exiting the café, a strange mist had rolled in, it had become distinctly chilly and some jackets were donned. Hard to remember what it felt like to be borderline cold! The ensuing climb and delightful coast along high moorland and down into Rosedale warmed everyone up and jackets were instantly removed in readiness for the final challenge of the day – Rosedale Chimney. This is not a spectacularly long climb but it is very steep with some interesting, rising hairpin bends so it was every man for himself and “see you at the top”. Tim R was the only one who made it up without stopping and with no discernible assistance, some had engines and some of us had another go at that “good thing”, walking. At this point, the sun came out for the final exhilarating descent down the unfenced moorland road into Hutton le Hole and that wonderful feeling you get when it’s all over! Despite some early reservations, everyone had risen magnificently to the challenge and said they had seriously enjoyed it. They sounded so convincing, I am certain they meant it! Helen & Keith T

7 brave souls set off in the relative cool of the Showground, following the previous day of heat. All was well and we made good progress out towards Collingham in warm sunshine. Beyond East Keswick Zoë and Rachel peeled off in the hope of getting back for assorted appointments, just before the short, sharp climb through East Rigton which surprised a few, given it had the Wetherby Road crossing in the middle, and we had a minor incident with one of our number falling off at the junction, but fortunately no serious damage was done. On to Lotherton Hall for coffee, new for some, which was busy and had a surprising array of large Scotch Eggs of assorted flavours. The choice to share resulted in a debate on how to chop a Scotch Egg into three fairly, but fortunately one of our number has a PhD in Maths which came in handy. A good day out. 103km and 939m climb, which was actually a fair bit for a flat ride, and prompted a refreshing beer for some at the end. Vince. 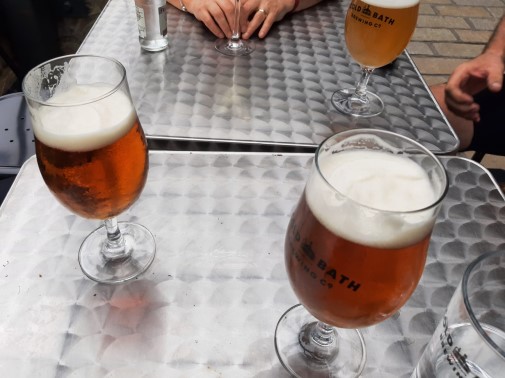