A good number of Wanderers assembled at Hornbeam ready for the route to Bramham. A speedy six lead the way followed by the rest, which split into a couple of groups of eight or nine.

After battling through the heavy traffic at Leeds road lights good progress was made through Burn Bridge to the foot of Walton Head Lane where group two caught sight of the fast group for the last time until the coffee stop later in the day. Moving on to Kirkby Overblow we picked up Paul who joined us on the scenic trail along Barrowby Lane towards Clap Gate. The clear weather offered splendid views towards Wharfedale and across to Almscliffe Crag. What a good backdrop for a photo.

With the photo taken both groups headed towards Sicklinghall. At this point a breakaway group of three headed towards Wetherby, while the main cohort continued down Northgate Lane towards Linton and Collingham. A steady climb up Jewitt Lane, then across the A1 and on to Bramham. With the climbing over and the prospect of coffee, we sped through Clifford and Boston Spa for the planned café stop at Thorpe Arch. As we approached, a huge group of cyclists were just leaving, Good news – plenty of seats. Bad news – they had cleaned up on scones and toasted tea cakes. We were forced to eat bacon butties and cake!

In the café we managed to catch up with the fast group long enough to capture the moment on camera, before they set off on route to Harrogate. Refreshed, the other groups followed along the cycle path to Wetherby and then the unseasonably dry Harland Way to Spofforth. Just before Follifoot we found fast group riders, Zoe and Vince at the roadside next to Zoe’s punctured bike. A repair job followed and Zoe was safely escorted back to Harrogate on her dodgy tyre.

A thoroughly enjoyably February ride just short of 33 miles through a fine variety of countryside. Thanks for the good cheerful company throughout. Mike P 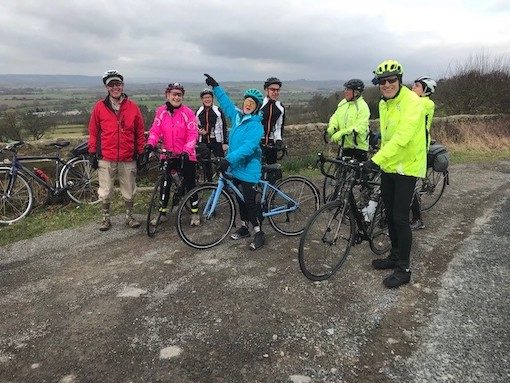 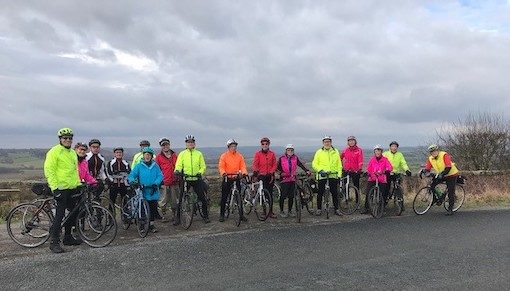 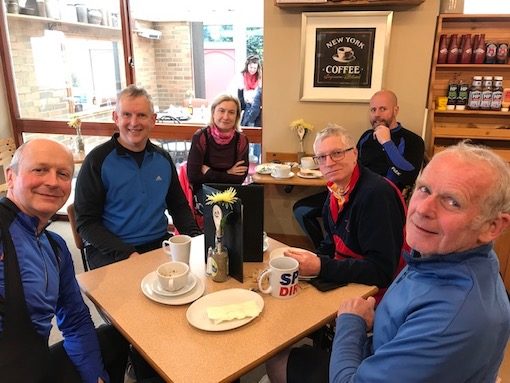 Great route plan from Martin who led nine of us to Ripon via Littlethorpe and Fountains for coffee stop at the refurbished visitor centre. Return route via Sawley and Brimham Rocks to Burnt Yates and home along the Greenway. About 40 hilly miles with some sunny bits and some very windy spells but all in all a good day out. Gia M 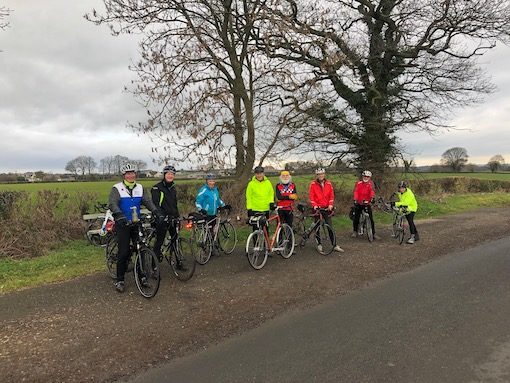 With several habitual Long Riders away this week, just four mustered at Hornbeam for our partly pre-planned ride to Coxwold and beyond.  Outward to Piccadilly Motors to collect another three takers, we progressed with some wind assistance to the usual constitutional stop in Boroughbridge.  Road works at the north bridge caused queues for cars but not for us and soon Milby was behind us and Thornton Bridge achieved in good time.  En route, Graham had had several calls, which resulted in a return home for him.  John S paced me back to the group, who had stopped to see what the issue might be.

The A19 crossing marks the end of the flat riding on this route and terrain got much more lumpy from this point.  Along the way we’d teetered past a farmer trimming his hedges and sought to avoid splinters as far as possible.  Graham was the unlucky victim last week, now it was my turn – a rarity for me.  Maybe it’s lack of practice, but it took an unconscionable time to fix the problem, due to several spikes through the casing, each of which had to be forced back out (tweezers to go in the tool kit from now on).

John did the honours in coming back to help and in pacing us back to the group, who by this time were two-thirds of their way through lunch at the re-arranged, reformatted Ampleforth Abbey tea room.  Just across the corridor from the tea room, the toilet location is now very much more rational than before (previously down very steep steps, deadly in cleats, as you may remember).  I’m not sure if the garden terrace has been retained – must go back.

Any prospect of an early-season attempt at White Horse Bank had disappeared at the route conference at Piccadilly Motors, leaving us with two main options for home.  We chose the route south across the College’s playing fields, possibly cheekily, to Gilling East and the climb up Green Hill to the Yearsley turn.  Swooping down from the Howardians to the vale we got a good sight of grey skies ahead and wondered if we were going to get wet before the end.

John zoomed on ahead from Easingwold for a school appointment, leaving five of us to tackle the breeze in our faces and, in due course, the rain we had seen from the top of Yearsley Bank.  Fortunately the rain was lighter than threatened and we approached the outskirts of Knaresborough without undue discomfort, to bid our farewells to Angie, Lesley and Richard at Half Penny Lane, leaving Jill and me to slog up to the Golf Course in time-honoured weary-legged fashion (speaking for myself here, I should add).

As if to add its final signature to the ride, I had a second puncture, back wheel this time, at Woodlands.  Fixed under the handy canopy at the Squash Club, the operation was smoother this time – showing that practice make perfect.  Eventually home after 64 miles of varied cycling experience, but still referable to daytime TV. Terry S.

One weather forecast said over 90% certainty of rain at 9 am, so some kitted out to suit, others said no way, Ha! First coffee stop was decided as the top Cafe in Boroughbridge, so a call was made to Whixley Wheelers.

Away went Wheel-Easy Wednesdayers after a chat and a look at Martin`s bike. Then it was us picking up Dave Watson on the way. It had been thought that the “A” team would have got their orders in before we arrived so that would be no queue, however they had put a few extra miles in and arrived at the same time, so we all squeezed in nice and cosy like (see photos).

To identify our orders we gave our names, to say we only had four Dave`s and two of them P`s,  initially it may have given them problems. Eric, Peter B and Cookridge Rob were away at Tan Hill Pub. So we wish them good weather. That is deep snow drifts that keeps them in the pub, but not for to long as they may eventually have to resort to drinking Lager.

The “A” team headed in a northerly direction, the “B” comprising Bill W, Dave t`other P and Norman headed for the Dunsforth`s, with Bill leaving us at Great Ouseburn. For us two it was then an early tea stop at Tancred Hall Farm Shop Cafe. On the way there the vehicle traffic was courteous, considerate and acknowledged our giving way to them, only one Range Rover spoiled a clean sweep coming out of Whixley.

Norman headed for home after Walshford and DP continued to Wetherby to return via the Kirkby Overblow ridge. No rain today Ha ! this stuff was horizontal, glad I had kitted out in wellies and sou`wester, and all three rear lamps were flashing for England. But a good ride, however must break that 50 mile barrier before long. Dave P. 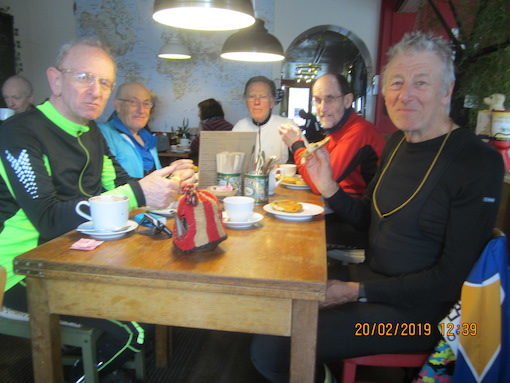 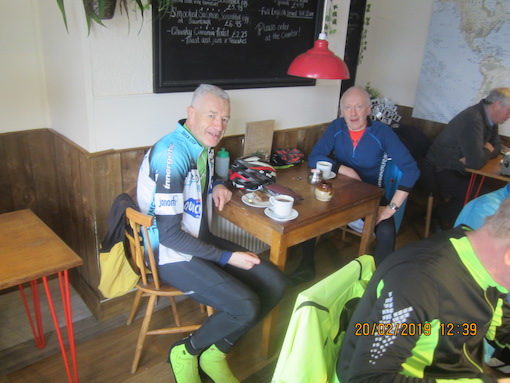 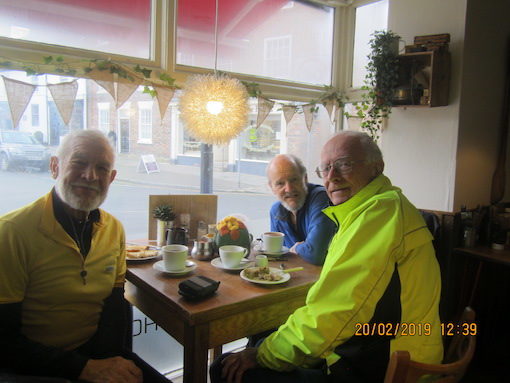 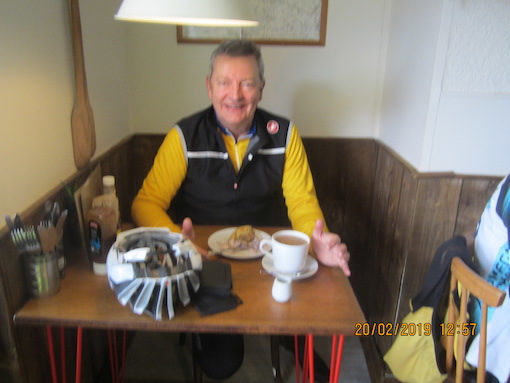