I cut it fine as usual, too fine! I had dawdled behind a couple of mountain bikers and should have gone past them. Instead I arrived at Low Bridge too late so headed down the riverside road questioning pedestrians as I went. The pedestrians confirmed I was heading in the right direction, as long as my description of a “bunch of old blokes on bikes” was accurate. I arrived at Wetherby Road to see them heading North and was soon amongst them.

My arrival meant we were up to eight and I was told we were going to Easingwold. At Sandy Bank it was decided to go anti clockwise. In Arkendale we lost Bob who preferred a shorter route, now seven.  We continued across Aldwark Bridge but not before we sent Paul towards the Dunsforths as he needed to get back. So, down to six, this feels like the magnificent seven in reverse. Apparently the bridge is under new ownership and there is a proposal to increase the toll.

The roads were mucky but the sky was clear and blue the wind certainly had some chill to it but no ice. Dave S and Geoff had a spring in their step, or should that be pedalling, and we kept a brisk pace arriving at the Olive Branch about noon.

Cafe stops with the EG’s can be quite controversial and even heated at times but always friendly and accompanied by a smile. I do hope the couple who left soon after we arrived had finished their lunch and were not put off by the noisy debate. Having disclosed that ride reports aren’t always devoured avidly, won’t put me off, and disagreed on Boris, Yorkshire CC, and more we agreed it was time to leave and head for home.

We headed towards Boroughbridge along the usual route. Unfortunately as we waited for the road work lights a cyclist joined us who soon went past us. The next sentence includes rag, bull and red.

I sat on his wheel with Marvin tucked in behind, I exchanged pleasantries and established we were heading back to Harrogate and he was on his way to work in B’bridge (the cyclist not Marvin). Marvin and I exchanged views on whether we should wait for the others, decided we should let the gap open but couldn’t resist a final flurry which involved catching him again, passing him and then stopping in Brafferton to attend to Marvin’s deflated tubeless tyre. Little did we know that John had also suffered a puncture at the same hedge cutting and so we had a longer than expected wait. Soon John, Dave S and Geoff appeared and Marvin and I jumped on our bikes but realised there was no Dave P2! An exchange of where’s Dave didn’t help the confusion as Dave hadn’t passed us and yet we were assured he had gone on ahead. A phone call to Dave P2 revealed that he had missed the turning at Brafferton and was on his way to York. He turned round and we agreed to wait. Further phone calls with the Dave S/John/Geoff group agreed, or appeared to agree, that we would stop at Morries in Boroughbridge where we would regroup and have a hot drink rather than stand around waiting in the cold. Dave P2 caught us up and we three set off to regroup with the other three with exaggerated instructions at junctions to remind Dave P2 not to go off course again or, more correctly, of his error. Perhaps there isn’t such a thing as off course on an EGs ride, just different ways to get between A and B.

Not sure what happened on the way to Morries, we can only guess. Geoff was waiting for us but no sign of Dave S or John but we do know they got home safely. Now four and a cup of tea later we were outside watching Marvin try to inflate his rear tyre, a situation made more comical by the very loud compressor which made conversation almost impossible. Marvin’s cries for a rescue were answered in the affirmative so, now three, we completed our ride to Sandy Bank where Dave P2 and Geoff completed the ride into Knaresboro’ while I went via Ripley and the Greenway to Harrogate, with a beautiful sunset.   CBee

Eleven Wanderers gathered at the showground this morning and the day promised to be dry and sunny as we set off in a six and five formation to Ripley. I had a couple of Mikes, couple of Steves, Nicky, Sally, Margaret, two Liz’s, a David and Colin. What a treat I had in store for them lots of lovely hills up and down Darley and Nidderdale. At Ripley up Hollybank Wood, Birstwith and on to Darley. After the climb out of Darley up to Crake Lane, Steve W, had not been out cycling for a while and was feeling the legs. After crossing over to Thornthwaite, Steve W left as he could not face any more hills. After the big climb up to the Stonehouse Road we crossed over to cycle on to Padside. After a few more long climbs, and stunning views, David asked how many more ‘Category Climbs’ were in store!! Reaching Wykeman Lane, I spoiled the group by giving them a lovely swoop down into Dacre and down to Summerbridge, though the ramp up to the top road was slightly challenging. I had booked Fir Tree Tearoom, Summerbridge, for our café stop, knowing that it was a long way to Fountains or Tates and we could choose the room home from Brimham, without worrying about a café stop. Judith who runs the tearoom and B&B had reserved us tables and soon we were tucking in to good food and drink. Having ten noisy cyclists descend on them took some organising of orders but it was soon sorted. Not many cafes on this route therefore one to know about as long as you ring to reserve tables as she has lots of local trade. After much banter how many hills can I still find and where my body was going to be disposed of, we set off to Wilsill, then the lovely road up to Brimham. Lots of beautiful llamas in the field and as we cycled past, they ran alongside us across the field, more big hills, well done Sally and Margaret up them all, only one touched tarmac guess who, yes me, café legs!! Alison loves this route and the Wanderers, wish Alison that her shoulder op went well and she will be back out cycling soon. At Brimham, Colin went straight on as he had a bowls meeting and was not sure if we would be home by midnight. Nine turned left through Brimham, then down Rabbit Lane, a long lovely swoop down, on to Scarah Bank (down it) to Ripley. Mike W left at Killinghall to sort the daughter’s dog out and cycle another 15 miles. Down the clean Greenway, many thanks to the Sustrain Rangers for clearing the path, no wonder Steve’s legs gave up, after clearing the full length of the Greenway the day before. I left at Bilton Cross and the rest carried on to Harrogate. Grand Day out many thanks for your company, Sally said we had climbed a Munro of 3200 feet and cycled 40 miles. What a day. Liz F 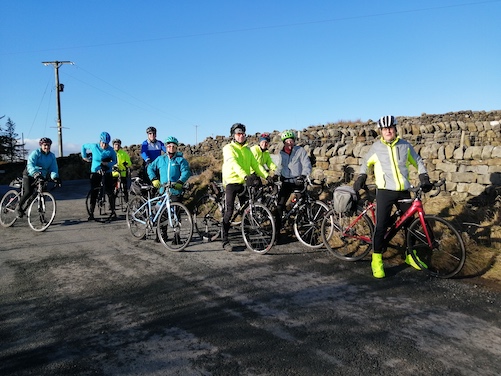 Watching the rain fall as I ate my breakfast porridge it looked like the forecast had got it wrong and we were in for a wet morning. But no. By the time I go to the showground the sky had cleared and we were in for a bright, sunny if breezy day. Six regulars plus new(ish) member Sarah set off for Burn Bridge to be joined by two Pauls to make nine. We climbed slowly (or the e-bikers not so slowly) up and then wound or way down to Leathley. Coffee stop at the café outside Pool where the newly covered outside seating made for a comfortable break in the sun. Back via Huby and Kirby Overblow where the group split in two to return  at almost the same time to the showground. Thanks to James for leading a lovely winter’s ride. Charlie 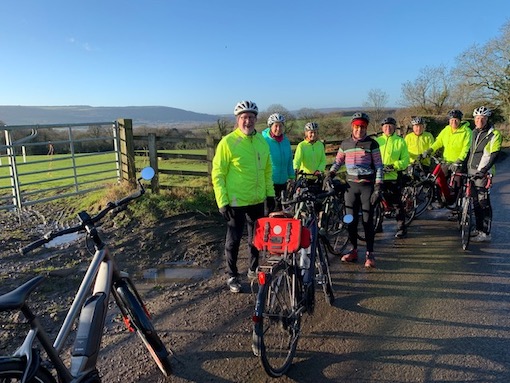 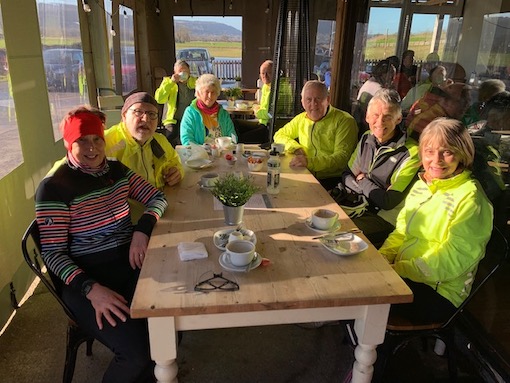 Woke to the sound of rain against the window but by the time we met at the Showground we were dazzled by clear Winter sunshine and blue skies. A select group of 6 headed out of town past Ashville and the Squinting Cat towards Beckwithshaw. Dennis kindly lead the way on his turbo charged bike for the long pull up to Little Almscliffe while the rest of us hunkered down behind him, battling the strong head wind and attempting to keep up! Female stonechat perched on her usual wall just down from the crag and a small flock of fieldfare noted on the Moor. Stunning views in all directions. From Norwood we headed onto Pennypot Lane, exiting first left. The traffic was well behaved as we nipped across the A59 for the beautiful road descending down in to Kettlesing and then on through Tang…. Dennis left the group at Hampsthwaite and headed for home and the rest of us set off for a well deserved coffee stop at Ripley. Refreshed and having put the World to rights we pottered home on the cycle path into Harrogate enjoying the gentle warmth of the Winter sunshine. Stunning views and great company….. no better way to spend a morning!   Zoe