Seventeen riders assembled in Stamford bridge for a ride in the glorious Wolds landscape in what ,those who turn up have come to expect, warm and sunny weather. The small ‘ risk’ group set off first and sped into the distance and the ‘steady’ riders soon followed and made their way on the quiet lanes towards Thixendale.  The first stop was at Howsham Mill which has been restored and was interesting to see. After that short interlude we enjoyed riding the quiet roads of the Wolds into the wonderful valleys of Thixendale and Millington. It really is worth some steep climbing to sweep into those magnificent valleys!

We met up with the brisk group just beyond Millington as Richard had had a puncture and as we honed in on our lunch stop yours truly also had a similar fate( lees than 100m from the café!)  Our lunch stop was at the World Peace café at the Buddhist Centre at Kilnwick Percy Hall. The food and service was excellent and we enjoyed our lunch in the grounds of the Hall- a little gem and well worth a visit.

With punctures repaired and everyone fed we set off all together( with suitable spaces between us) to make our way back to Stamford Bridge. The second half is flatter (but no less enjoyable ) via Pocklington, Bishop Wilton and Full Sutton and we made good time back to the car park.  It had been a great route in the warm afternoon sun and it reminded everyone what a great area it is for cycling.

Thanks to Mike Clark for his great route and all the research he had done to make it a great day and to Steve Wright and Richard Leake for leading the groups.  42 miles and 1900’ of climbing with great views and wonderful scenery.  Thanks to everyone who came along to make it such a good day.  Kevin 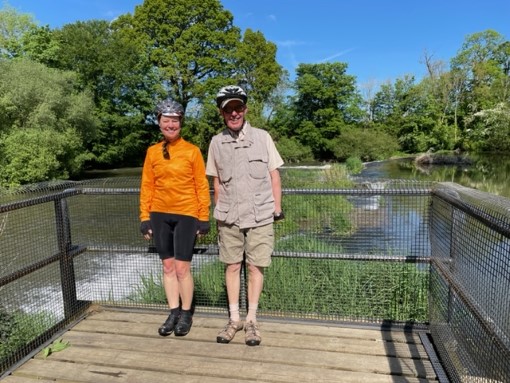 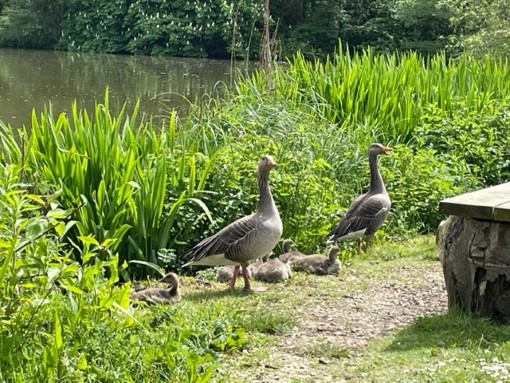 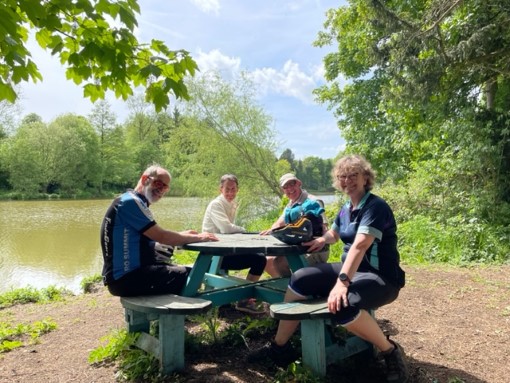 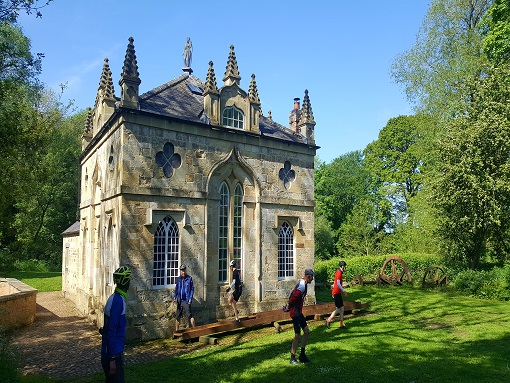 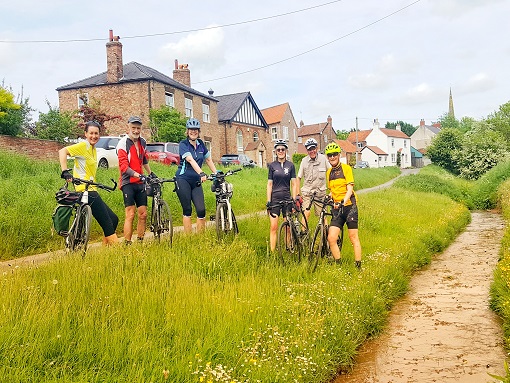 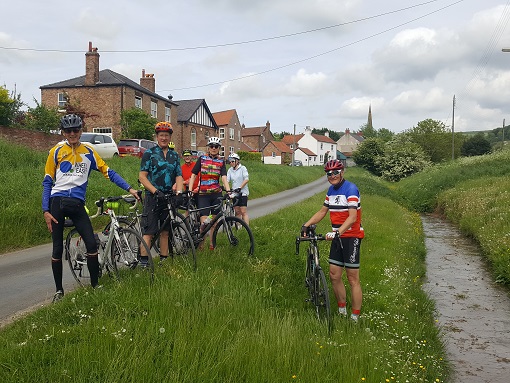 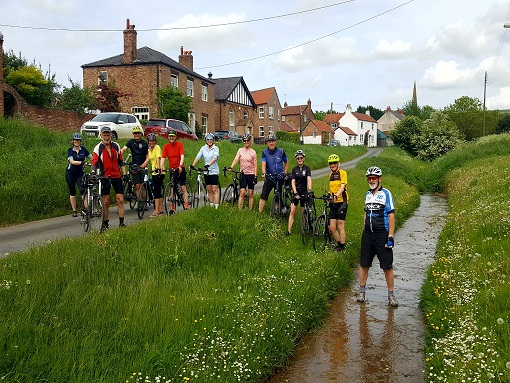 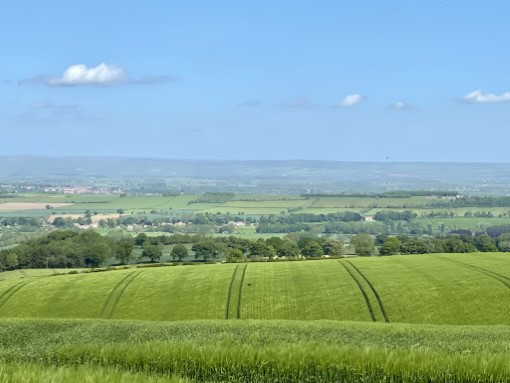 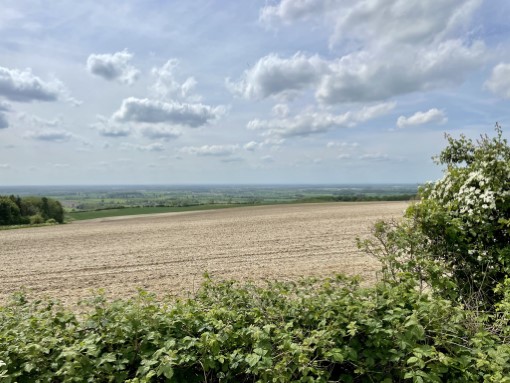 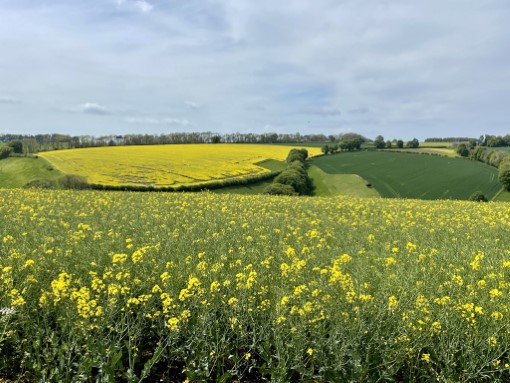 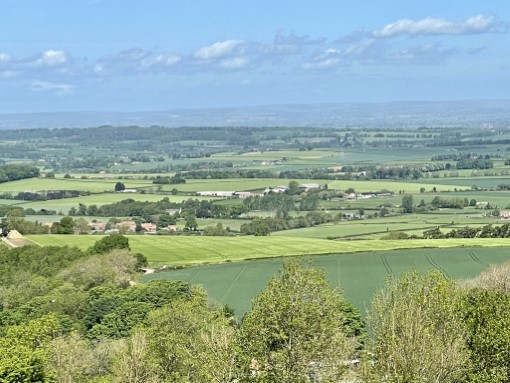 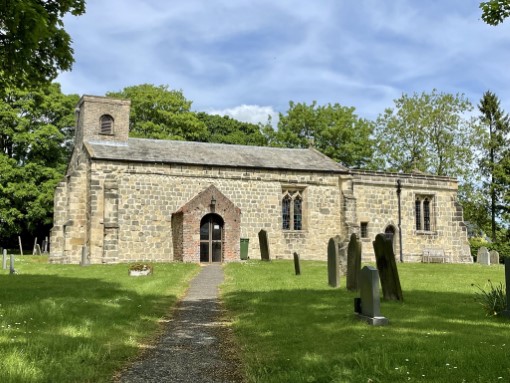 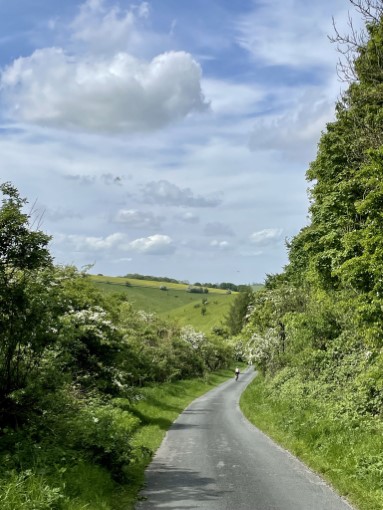 Eight riders joined Chris and me for the short ride on a glorious sunny day. The first part of our route and the medium ride were the same, so I decided to wait for the medium group to leave, because I thought that they would be faster than us. The medium group passed us just after the traffic lights on Leeds Road and Leadhall Lane, I’m not sure how that happened? We rode through Burn Bridge, up Walton Head Road to Kirkby Overblow and along through Clap Gate enjoying the quiet peaceful lanes. We turned into Paddock House Lane, a single track lane toward Wood Hall Hotel and Spa where we encountered a surprising number of vans and cars coming in both directions at the same time. It felt like a few minutes of musical chairs as we all tried to pass each other. Fortunately the drivers were all very patient and everyone managed to pass each other safely. We went along the concrete track to the hotel and down the lane to Linton. Several members of the group commented that they had not ridden this way before and that it was a lovely route. I credited Brian for showing us this route a few years ago. From Linton we went into Wetherby, where Dennis peeled off at the Old Station and made his way back home.

We had a coffee stop at “Gourmet” and a group decision to alter the route was made. It was felt that Harland Way would be too wet, muddy and dingy because of the heavy rain earlier in the week. Brian and Joe suggested going to North Deighton. Joe led this part of the ride because I didn’t know the way. From North Deighton it was decided that it would be quieter and safer to go via Little Ribston. We rode through Spofforth on to Folifoot and back past Rudding Park back towards the showground where the group split to make their ways home. A lovely ride with great company. Thanks to Joe and Brian for their help. 24 miles Chris and Chris 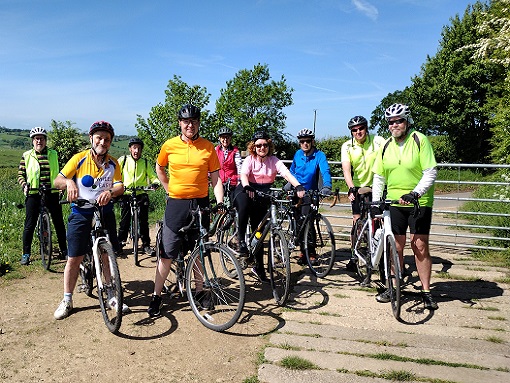 A small group of Wanderers met to cycle route 124, led by a rare appearance of Angela. Other Wanderers were off on the Awayday. The sun shone. We meandered through the country lanes at such a leisurely pace that Keith was able to catch us up at coffee, having left an hour later! We agreed there was a lot of chatting to be done. A detour to Waver Spring Pond at Compton (photo) was enjoyed before the second detour, passing through Boston Spa. Sadly the WISE café was shut but we found refreshment elsewhere. 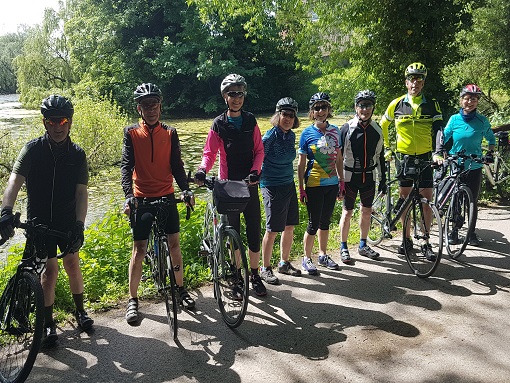 A select group of four had a plan to visit Beningbrough, but once across the A1(M) and over the rattley bridge under blue skies, serious thought was given to the numbers that might be attracted out by the fine weather, to arrive at the farm shop at roughly same time as ourselves.  So an executive(?) decision was made to detour and head for Helperby in the hope that we might find a local pub/eatery with outdoor gardens for a snack lunch.  Of course, everyone wanted to go via Myton-on-Swale to marvel at the late Ken

Morrison’s château (see below) and as we had a fluent French speaker with us, all sensible questions could be answered.   At Helperby, a sign to the village hall caught the eye – “soup plus drinks plus cake and cheese and biscuits all for £4 – with seniors at 50p off…” at this point, the sound of birdsong in the village was suddenly silenced by the squeal of brakes being rapidly applied, to bring the peloton to an abrupt halt! Had the sign said Wednesday only? Could it really be today…

Following our delicious luncheon, we suspect the average speeds suffered somewhat, but at least no need for further refreshment as we began the return leg, passing through Boroughbridge and into Knaresborough taking the Beryl Burton route out towards Bilton.  At the top of the cycle-path, John and Stewart peeled off towards Starbeck, leaving Peter and Barbara to head (via Bilton Lane) for home.  Mileage: over 45; superb conditions, though quite a bit of traffic . 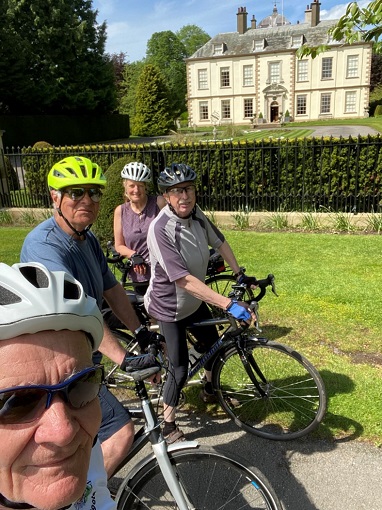 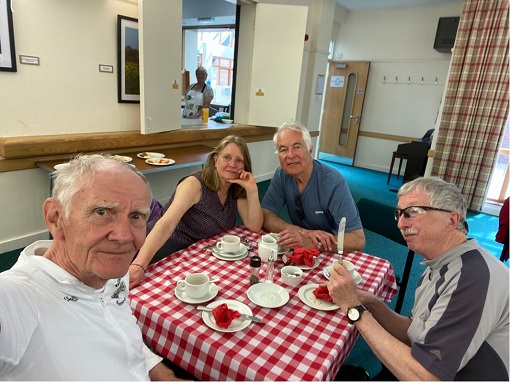