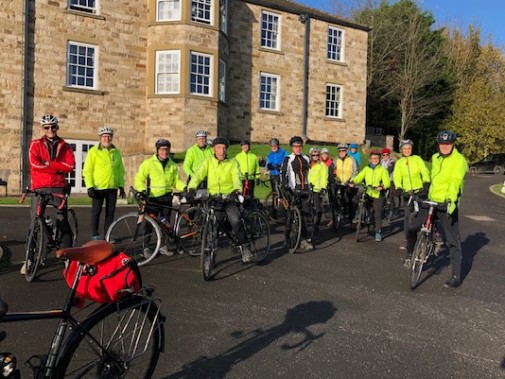 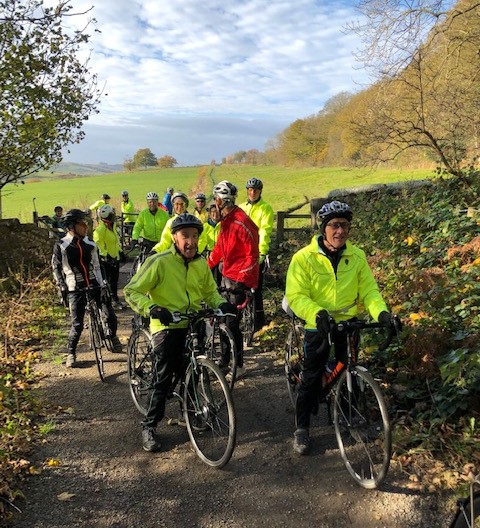 About 18 of us for the Arblaster route today in initially cloudy weather: too many for one group, so we split into 3. The eponymous David A took a second group and Brian a third. Getting across Hookstone Road from the gated road from the showground was very slow: the traffic lights took forever, and the third group was consequently about 5 minutes behind the second. To avoid Leadhall Lane, we went towards St George’s roundabout and past the cricket ground and on to Green Lane. Paul B was waiting for us at the start of Walton Head Lane, and we pressed on to Kirkby Overblow and Kearby before turning right before reaching Sicklinghall on to Paddock House Lane.

Across the bumpy concrete slab path over the field past Old Wives’ Wood to the Carmelite Monastery and Wood Hall Hotel, where Geraldine took the photo, now in bright sunshine. Glyn A mysteriously appeared out of nowhere. We pressed on to Linton, where Dennis left us, and then to Wetherby, where Morrisons was the only realistic option for coffee. Over coffee, someone asked how we were going to get back to Harrogate. Brian suggested a less usual route along the old A1 cycle path towards Little Ribston, a route which Paul B knew. I handed over control to them, and we headed out and got a bit lost, but we eventually all met up again in vaguely the right place. Spofforth and Follifoot and across the bypass (where the barrier on the cycle path has been removed) and then Rudding and the Showground Hill. About 28 miles.

8 riders opted for the rarely ridden route to Wetherby via Weardley Bank and Eccup Reservoir with the aim of Sarah R joining us en route. The ride out to Kirby Overblow and then along the main road to Harewood Bridge was safely negotiated and we then set our sights on the ‘big climb’ of the day. The e-bikers had the easier climb of Weardley Bank but everyone else did really well and we gathered at the top to get our breath.

With some great views on the tops we made our way to Eccup where Sarah joined us to make the group complete. After crossing the main road we carefully made our way up the leaf covered bridleway and out onto the road again. We then made our way towards Wetherby after some running repairs to Yvonnes mudguard (thanks for the tape Mike) a failed cafe stop at Collingham and a closed road at Linton for our cafe stop.

Pomfrets made us very welcome and we enjoyed our refreshments outside in the winter sun. Sarah left us after the cafe and we decided to make our way home via Little Ribson( where James and Steve left us) and Follifoot and then onto the Showground where Gia showed Mike the power of her e-bike with an impromptu hill climb challenge.

A new route for many of the group and we were grateful for Sarah knowing the local area to ensure we made all the right turns. A good route that we should do more often. 36 miles in good weather and great company. Kevin 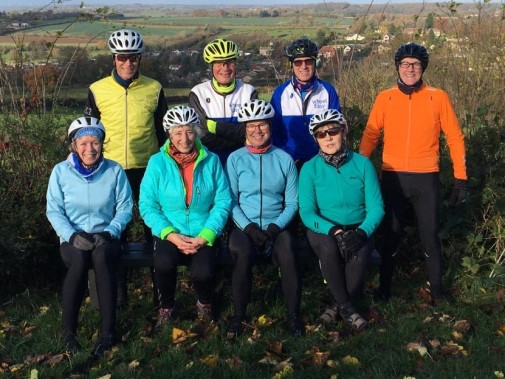 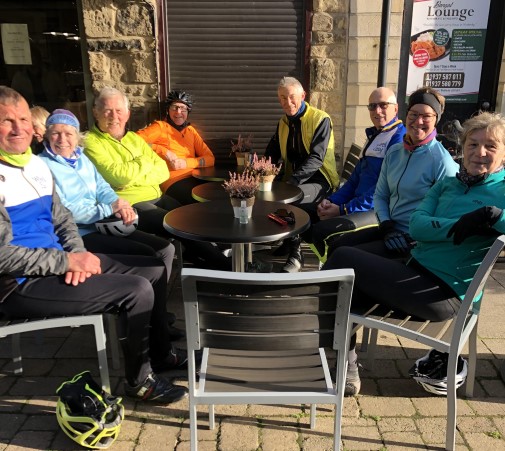 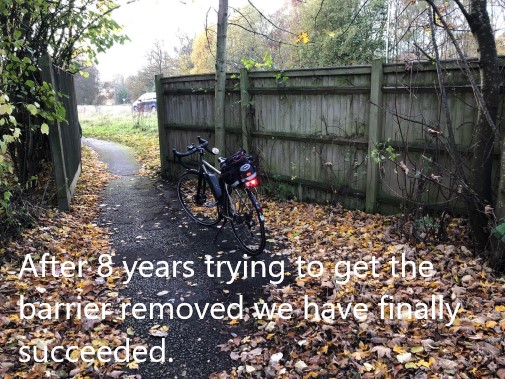 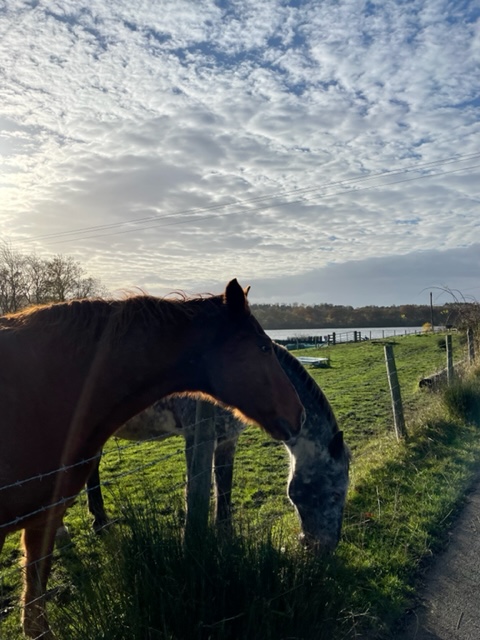 Our group of 7 riders followed the prescribed hilly route and, although it felt like a battle against the  headwind, we were rewarded with stunning views of Yorkshire basking in the autumn sun. In the deer park ,we stopped for photos by St Marys church and carried on to the Spa Gardens which is now SHUT FOR WINTER !! Some friendly locals directed us to the Forge, which was cash only and the seating was outside in the shade so we doubled back to Chimes ,which is opposite the cathedral. Sadly no bacon sandwiches, but they did serve home made soup , sausage rolls, scones, cakes and mince-pies. The seating inside is limited and bikes have to be left out the front but the food was fresh and tasty and we’d run out of options….

The route back was changed slightly, to ride from Bishop Monkton to Markington and back along the Greenway and thus avoiding the ever- unpopular Knaresborough Hill. Great ride and good company- Thanks to all. 47 miles, 3000’ ascent. Julie E 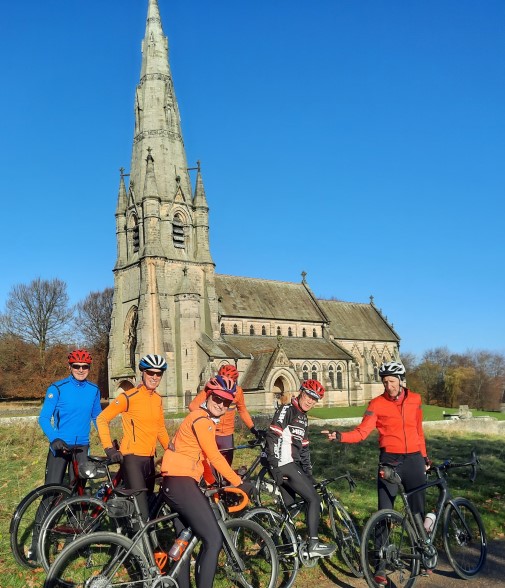 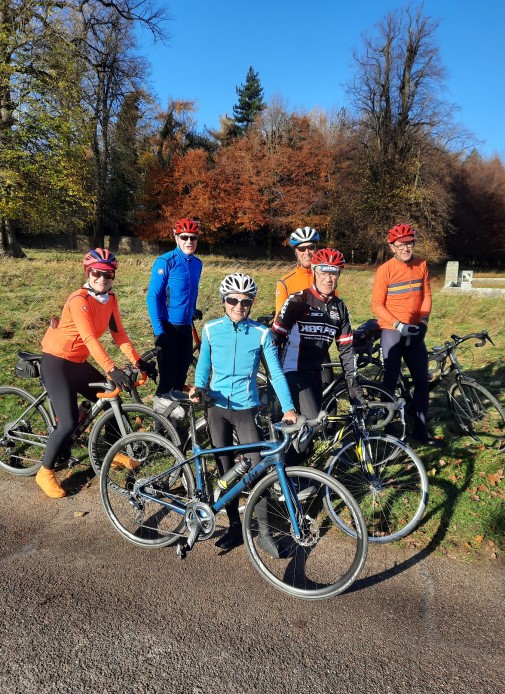 Six riders met at Low Bridge and decided to head for Easingwold. Meanwhile and not for the first time in recent weeks, I was in hot pursuit, later than usual. Note to self; I must aim to arrive before the leaving time and not at the leaving time!  I asked a passer-by if they had seen a bunch of finely honed athletes on bikes, they shook their head but said they had seen a bunch of old blokes.

I was on their trail moving along the river side path as fast as I could without upsetting the dog walkers. Another member of the public confirmed they had turned left towards Ripon or Boroughbridge. At the next traffic lights I was in that difficult position of do I try to call them and make it more difficult even unlikely to catch them or do I press on and guess which way they went. I decided on the former and rang at least one EG who had decided to stay at home (sorry Colin) and left messages with two who may or may not have joined the ride. By the time I got to the road works on the B’bridge road Eric called me from Sandy Bank and a rendezvous was agreed at the bridge in B’bridge. They would continue via Staveley while I went straight there not the nicest of roads.

As I pushed on I began to ponder on which bridge they would wait and why was it that only after I ended the call did I begin to have doubts and not during the call. They were waiting for me at the River Ure bridge, Eric, Geoff, Dave P2, John, Marvin and newbie Paul. I am embarrassed to say how good it was to see them all, I really needed a social ride with my mates after interrupted rides in recent weeks. So pleased to see them that I offered a back wheel to the backmarkers and then to the reformed group along the usual route to Easingwold.

It was a lovely morning, blue sky between white clouds and the winter sun showing the autumnal leaves up beautifully. Felt good to be alive and the traffic wasn’t too bad either with no close passes that I recall.

A one stop strategy had been decided upon so we went inside the Olive Branch (or is it tree?) to avoid the cooling effect of the fresh air on the warm food. Wide ranging chat and banter included the relative benefits of performance enhancing substances, the merits of being retrospectively awarded a win after use of the former and we even mentioned Yorkshire cricket without me getting my soapbox out!

The ride back was into the wind via Aldwark Bridge, we stayed as a group two abreast mostly, the road was quiet and wide enough for cars to pass. Marvin’s tubeless tyre went down, but was soon back up with some sealant manipulation. Apparently it helps if the hole is at the bottom where any sealant which moves will accumulate and be more likely to fill the hole. This made a nonsense of one of my favourite jokes ‘that it’s only flat at the bottom’.

John set off for home via the Dunsfords at Great Ouseburn where there was some confusion. The EG’s often use the bandstand type structure as a final stopping place, some thought that was the plan. Marvin was definitely stopping to top up and some went on ‘slowly’. As ever in these situations, those at the back had to fiddle with something, in this case mudguards, the gap grew. The now six were dispersed. Eric and I rode to Sandy Bank where we parted ways, me home and Eric to get a few extra miles in his legs after a decorating enforced loss of fitness.

A great day with a great bunch, what club riding is all about, thanks guys! Chris