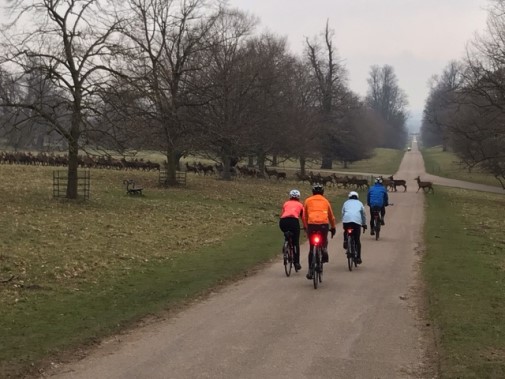 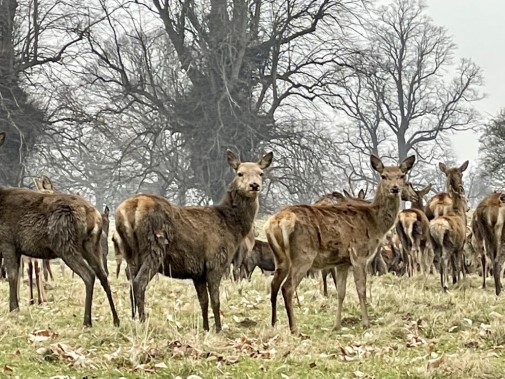 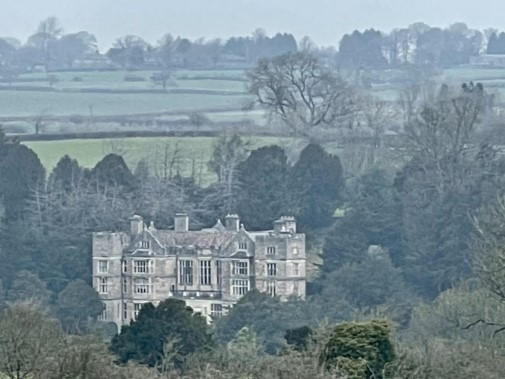 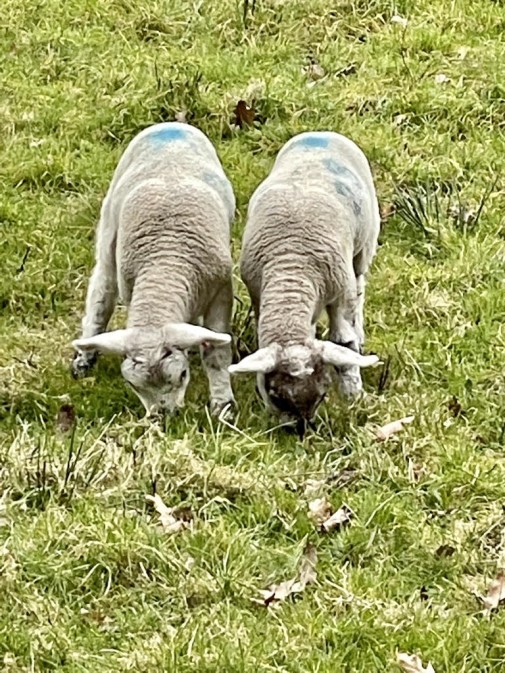 With the Awayday ride postponed due to inclement weather and with not a drop of rain in sight, the Wednesday riders gathered to undertake a hastily planned ride to Ripon. Kevin was muttering “that he should never have trusted Michael Fish with the weather forecast for the Awayday ….” as a small group of eight set off for Ripley. From Ripley it was up Scarrah Bank and on to Fountains Abbey with the site peeping out of the mist (but still no rain).

As we descended down into the Deer Park we got a magnificent view of the deer herd crossing the road and we stopped and watched as they strode majestically across the park. A rare treat!

On to Tates for coffee and toasted teacakes (for the majority) and good banter (not always about the weather…).

It seemed Tates was the place to go for Wheeleasy today as most of the groups arrived at some point but we were all dealt with very quickly and efficiently.

From there it was decided to go back via Littlethorpe and Bishop Monkton before heading for Knaresborough with the sun in our eyes to deliver James home and where Tim W peeled off to strike for home.

A good improvised ride (33 miles,1800’ of climbing) in decent weather. Thanks to the two Tims, Yvonne, Paul, James, Colette and John for their company and not giving me too much stick about the Awayday…

Bit of a murky morning with the prospect of rain didn’t deter 9 enthusiastic Wanderers. Our group enlarged to 11 picking up Mike P and Corrine at Low Bridge. Good progress was made via Farnham, the Roecliffe bridle path to Boroughbridge. Far too early for coffee so onto Langthorpe and Skelton . We’d decided on Tates just outside Ripon for coffee even though it was off the published route. WE riders in abundance as all three medium rides had made the same choice. As we had already deviated from the official route and the weather was holding we decided to go through the Deer Park and head for Markington. From there up to Drovers X road and then Ripley and home before the rain. Great ride, great company. Thank you one and all. Thanks to Mike W – my sweeper. 39 miles. Colin B 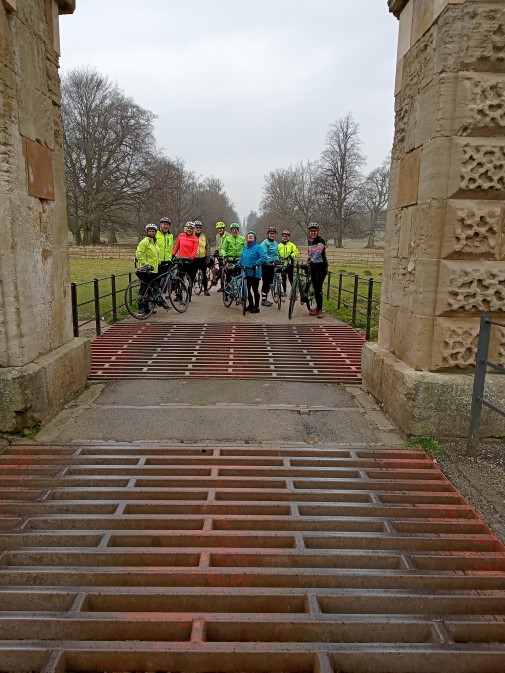 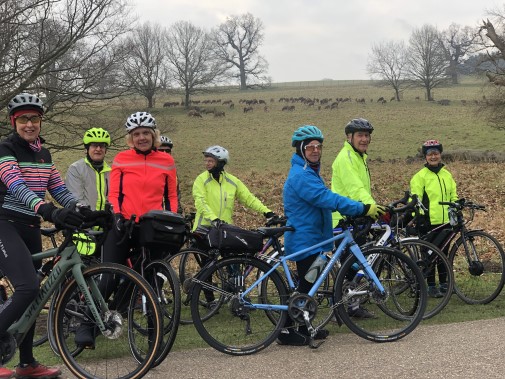 Four of us set off from the show ground on what was supposed to be a wet day but actually stayed quite  pleasant if a little misty. Jessie, Dennis and new man Mark and me did a version of route 128 which took us to Menwith via Almscliffe Crag and various small hills which Dennis sailed up putting us all to shame! The rain held off apart from a few drops round the Sun Inn area and we went on towards Hampsthwaite and Sophie’s- which was shut! My first Wednesday ride, should have checked! So a decision was taken to go to Ripley Castle cafe which involved a steep climb to get to the Greenway where the e-bikes obviously sailed up but Jessie made it to the top without being too out of breath with Mark close behind.
Dennis left us at the cafe to make his way home and the three of had a coffee and nibbles before Mark too bid us goodbye to make his way home.
Jessie and I continued back along the greenway meeting Janet, Helen and friends just before Claro road, parting company on Skipton Road to go our own ways home. A most enjoyable ride, bit longer than the “20 mile short ride” but I don’t think anyone complained. I also discovered you can take pictures using a watch!*
Dave Robinson
[* I think you will find that Joe 90 could do that in 1968 – Editor] 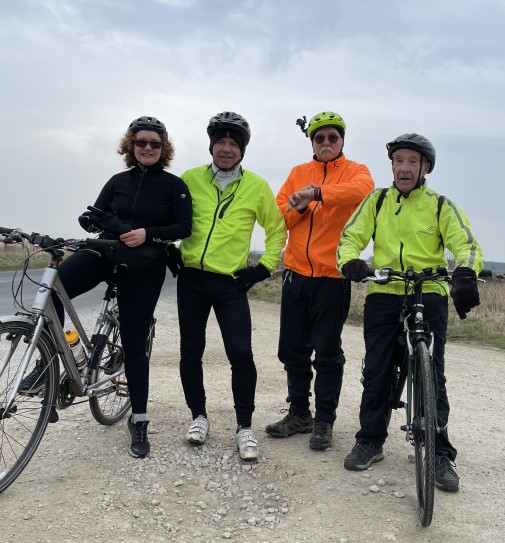 Medium Plus Brisk Away Day 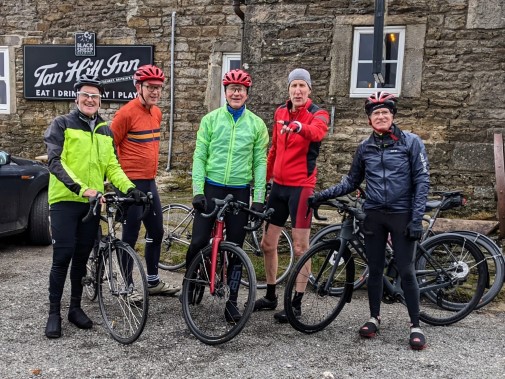 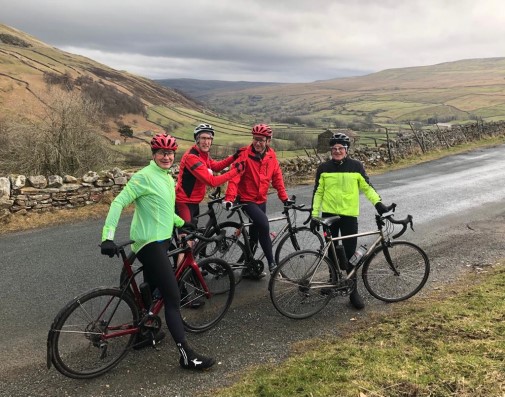 5 riders opted for a 45 mile route starting at Reeth in Swaledale. Given that there was three Tims in the group it was decided that everyone would be called “Tim” for the day & it worked very well. First up; north out of Reeth to climb up to The Tan Hill Pub with rain in the air & a distinct chill but very little in the way of wind. Swooping down from Tan Hill, Tim took a corner a little too “adventurously” & ended up in a heap on the moor for a short while. No damage done (& with much hilarity amongst the other Tims) we continued onto Kirby Stephen where all 5 Tims probably ate far too much. A stiff & prolonged climb towards Keld underlined the gastronomic folly before a welcome scoot along the Swaledale valley. 4,640 ft of climb. Tall Tim.