Five set off from Hornbeam Park (Colette, Janet, Mike, 2 Tims) with the intention of doing the published route but with an add on loop to take in Pateley Moor and Dallow Moor. We cycled along the south side of The Stray and down the Greenway to Ripley. We were surprised to find the Wanderers Group were already there as they didn’t overtake us en route!  Allen joined us at Ripley. We cycled along the cycle path through Hollybank Woods, down Clint Bank to Birstwith, across the Toll Bridge and up Stripe Lane. Janet left us on the north side of Brimham Moor as she was going to watch the film ‘Little Women’ in the afternoon. The five of us who were left carried on along the extended loop into the Moors. Although it was very blustery this was more than offset by the  superb clear views and very quiet country lanes which led us to G&T’s at Risplith. After our caffeine intake and bacon and egg butties we headed back via Sawley, Watergate Lane, Ripley and the Greenway. A superb 41 mile ride, quite hilly (885m ascent) ride with great company.     Tim R 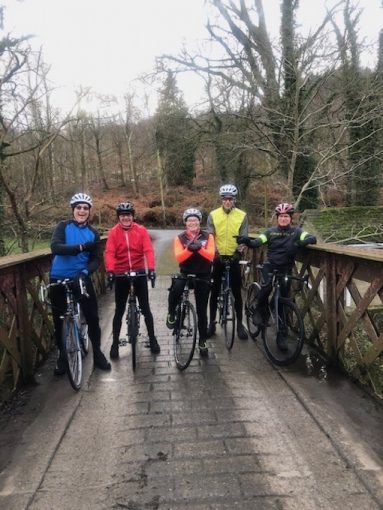 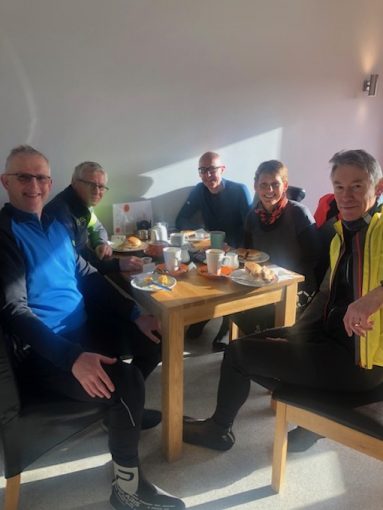 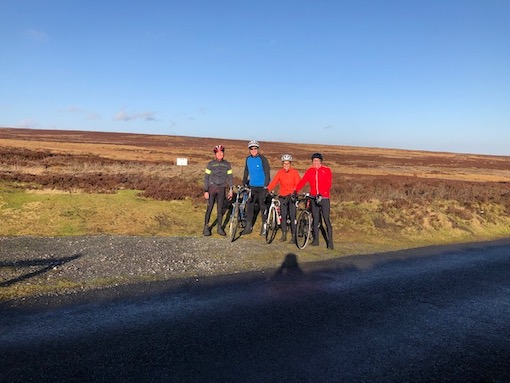 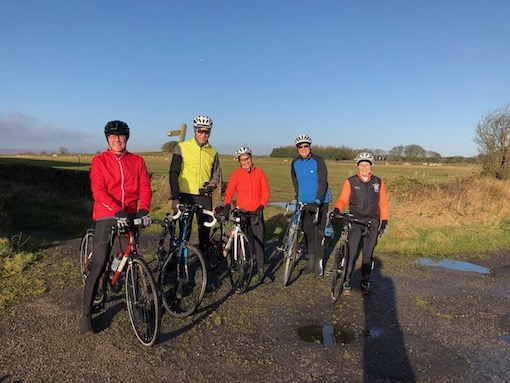 There were 18 of us gathered at Hornbeam this morning. Keith M kindly took a group of 8 and I took a group of 6, both heading up the Greenway to Ripley. We continued up Hollybank Lane to Clint and Burnt Yates then upwards towards Brimham enjoying the lovely views and weather. As we passed the Llama farm, a faster group were coming up Stripe Lane. They soon passed us and by Brimham were out of sight and not seen again until we were about to leave the café, having been on Dallowgill. We paused for a photo with a backdrop of Dallowgill before Joe and Geraldine left us to head back via Warsill to undertake grandparent duties. As my group were approaching the Ripon – Pateley road, we found Keith’s group mending Liz F’s puncture though having great trouble getting the tyre off. Once that was achieved the ladies were sent off to get warm while the gentlemen soon fixed the puncture. The ladies enjoyed the fast downhill ride to Sawley and on to G and Ts at Risplith. The others soon joined us and we all headed homewards together. One rider decided to practice a collection of ‘swear words’ as we climbed up Low Gate Lane and then past the Travellers camp and on to Watergate Lane! 34 miles,

Thanks to Keith for leading the 1st group. Liz P

We had a dozen riders at Low Bridge, the weather looked a bit dull despite the promise of sunshine which would make a change from the perishing rain. An “A” team member suggested Otley as a destination, this encouraged another to suggest that we might as well take in Ilkley then. First coffee stop why not Wetherby, and where ?, as we were now a Bakers Dozen only one cafe suited our requirements for space and comfort and a good get together..

The “A” team were first away, the “B” team somewhat later due to two of its riders having a second cup of coffee. Bill, Dave P1 and Norman headed for Walton via the cycle path with Bob taking a more direct route home. At Walton, Bill rear wheel punctured with a glass sherd/shard of glass, this would have been difficult to remove without the tweezers one rider was carrying (he had well maintained eyebrows), and with the help of sticks from the hedgerow dirty hands were kept to a minimum. Then on in the blue sky and sunshine, north to Cattal Bridge, left to Hunsingore, then on to Little Ribston, Knaresborough and home. A nice ride in good weather, though at times the “light breeze” did let you know it was there.         Dave P

Just for the record the A team did make it up Askwith in various states of distress, some stopped in Ilkley, Pete, Colin and Chris pushed on without a stop, 55 miles or there abouts.  Chris B

No Terry S to lead us today. As usual in such circumstances a ride to How Stean is the normal standby. There was only myself and Andy A willing to participate in the Long Ride. We made good progress via the normal route of Squinting Cat, Penny Pot, Hampsthwaite, Dacre, and Yorke’s Folly. The tearoom at How Stean was quite busy mainly with motor cyclists. The return route was via up Pateley High Street, Brimham Rocks, Burnt Yates and the Greenway. Although we set off with grey clouds the majority of the ride was in bright sunshine and we managed to avoid the worst of the gusty winds. As is the norm recently we had to navigate our way through several road closures. PCJ

Wednesday ride Report:  We had so much fun we forgot to take a photo and until late on Wednesday evening completely forgot about the Ride Report.  So just a few brief words and an apology for a tardy reporter performance.  The day improved and by 10.30 the sun was out accompanied by a brisk lively wind.  The whole group of nine headed for Boroughbridge via Farnham and Marton-cum-Grafton, with a stop at Bean Cafe.  Then we all split into separate groups taking different routes in a roundabout way back towards Harrogate. My group of four rolled along to Skelton, Ripon, up through Studley Deer Park (which looked super in the winter sunshine), then Markington, Ripley and home.  A really enjoyable 40 miles in good company. Martin W.

This has been reported to NYCC. Apparently sat nav leads drivers this way from Home Farm! The rescue truck and this lorry have made a real mess of the Greenway that Rangers cleared up recently. We trust NYCC will seek compensation for the company to clean up. Gia 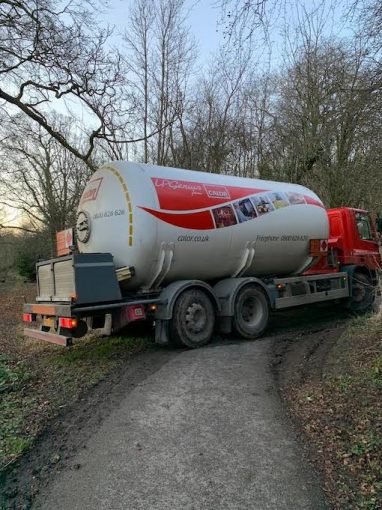