Four intrepid Poddlers’ set off to explore a route none of us had used around Wetherby Racecourse which could be used rather than a extended circular trek around to Walton, Cowthorpe and Hunsingore. So taking the easiest route to Wetherby via Knaresborough we took the bike path towards Thorpe Arch and turned left towards Walton. Instead of skirting round the church we headed straight through the village towards Bickerton.
A lovely route which we had never been down to what looked like a B road on the O.S. map. Lovely route to a very busy but short way round the race course back to coffee on the Shambles Wetherby…..
No cheese scones but a pleasant fruit tea cake and enough butter which even I could not spread to finish. After an hour and a half we had sorted out several world wide social problems and continued on our way home not taking the Harland way back to Spofforth. Here we met Glyn lurking in the churchyard who immediately set to trying to eliminate Jane’s tweeting bike bird. Success lasted five miles by Folifoot Jane’s bike was tweeting again…a lovely swoop down Rudding Lane and dancing with traffic light changes we arrived home after 29 pleasant miles of chatting and pedalling. Thanks to all for the jolly morning’s fun. Caroline G

A second good day out with Wheel Easy. Yesterday I was with the Wheel Easy group who do voluntary work for Sustrans. We cleared the Greenway from the Harrogate end to Bilton Lane. Why not come and join us next month?
The best quote from today was “the person who put the details on the website must have been sarcastic when they said there were some hills”. I wasn’t being sarcastic, I just slightly mis-remembered how many hills there were – but they were simply the best hills weren’t they?
We started with a slightly faster group of five and the rest of us – something approaching twenty. We all split nicely into groups of four for the run out to Beckwithshaw into the wind. Having re-grouped we set off past Little Almscliffe and on to Jack Hill Lane. Such a lovely ride with great views towards Timble and Swinsty reservoir. The colours of autumn were evident everywhere. Even the road itself was covered in yellow pine needles. Five stopped at the end of Jack Hill Lane for refreshments. I led the others up the gated road and then down past the trout farm and up to Farnley. The climb up to Farnley was worth it for the long glide down.
Then lunch at the Local Pantry on the Otley Harrogate Road. It looked full but they absorbed all seventeen of us at once. We briefly spotted the faster group in a corner. Then we split into three groups – some went to Kirkby Overblow, those who were in a hurry separated from those who preferred to go slower but both groups went past Almscliffe Crag. Then to cap off a lovely ride we flew down Brackenthwaite Lane.
Thanks all for a great ride. I made it 28 miles with 739 metres of climb. Steve W 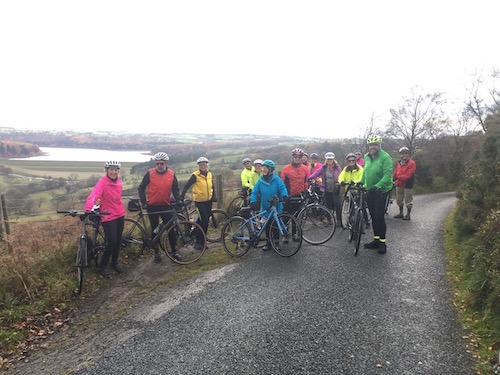 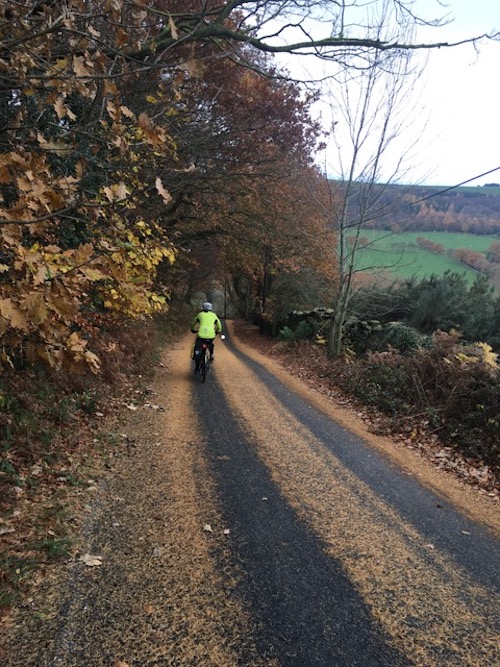 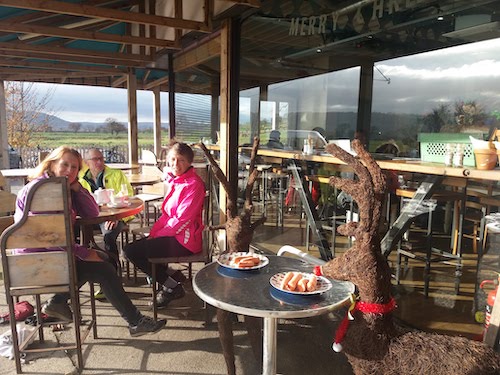 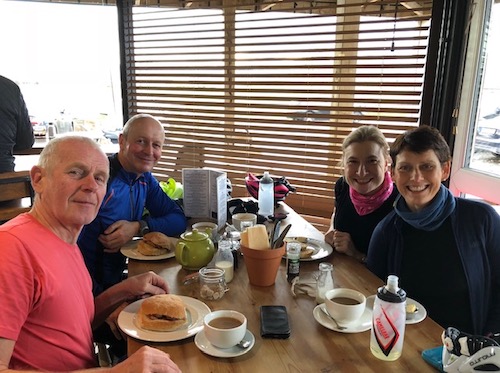 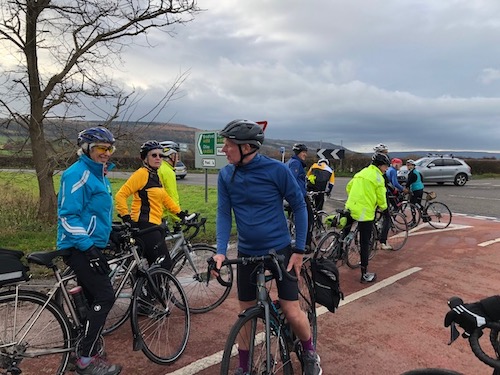 Surprisingly we had a route worked out before we met at Hornbeam. Nine of us set off to Otley via Burnbridge, Brackenthwaite Lane, Stainburn and Leathley. It was a route we hadn’t done for a while and we had forgotten how nice it was. We arrived to an empty ‘Cafe Cafe’ on New Market Street. The owner was very welcoming and allowed us to put the bikes in the courtyard behind the cafe. After coffee we were all undecided what our route home was until Gia took control. It was a great 30 mile ride in good company with the added bonus of good weather. Thank you everyone! Paul T 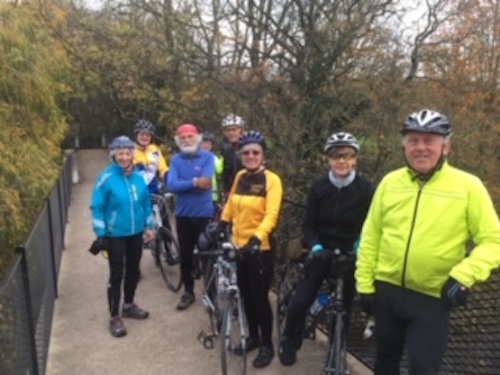 A group of ten aspiring Long Riders got away from Hornbeam today destined for the coffee houses of Ilkley, where the rest of the day’s cycling would be decided. By the time we’d passed Ashville College the groups for the day had formed themselves organically into five Friskies and five Steadies. So be it!
The route was a well-worn one out past Little Almscliff where the gusty wind asserted itself in forthright manner, with some hearty sideways slaps on the way down to Swinsty. A constitutional break at Fewston preceded the climb of North Lane up to Timble where, it being the second Wednesday of the month, the Timble cake-fest cum coffee morning was in full swing. Too early for this, we pressed on to Askwith Moor, opting for the Low rather than the High Snowden route, to avoid battling the wind and the quarry lorries on the top road. Once into the valley, the wind became a lot less embattling – if only the same could be said about cars with retained licence plates!
In Ilkley our cafe of choice this time was Outside the Box (‘cos it’s opposite the Box Tree, if you’re unfamiliar). It’s a busy vibrant cafe run by a charity which offers sheltered work placements for young people with learning difficulties. The menu is nicely varied and has what cyclists need i.e. beans, but today no-one chose them. For once, Richard S was fazed by the cake (banana and triple choc, I think). Staff were friendly and well-drilled. If you’ve not tried it, do. With some of the Steady group needing to be back in HG early for afternoon commitments, there was little discussion about “where next?” Nor was there any obvious chatter about Brexit – that having been exercised earlier in the ride – but there was a discussion about the Passchendaele mud art in Ripon over the weekend.
We avoided a complete re-tracing of the outward leg by heading for Leathley, the “Cote de Stainburn” and Almscliff Crag for our return. With a benign wind, clearing skies, sunshine and pleasantly warm temperatures (fit for May or September) cycling along the lanes to North Rigton was a joy to be savoured. Will we pay for it later, I wonder?
Farewells were bid at Braythorne and Pannal lights, with the day’s objectives met and still a possible two hours of daylight left, but other needs pressed today. Mileages were in the range of 40-50 with a steady ascent of c 3000 ft. A short day but a great one – for the Steadies at any rate; I wonder what became of the Friskies? Terry S 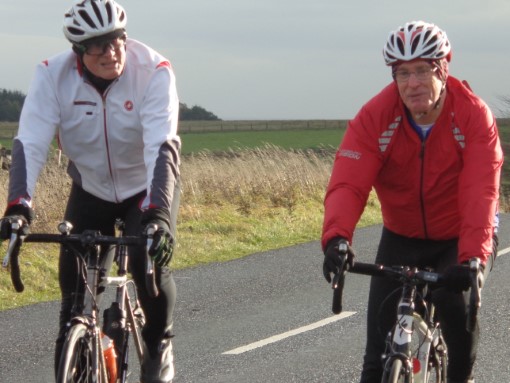 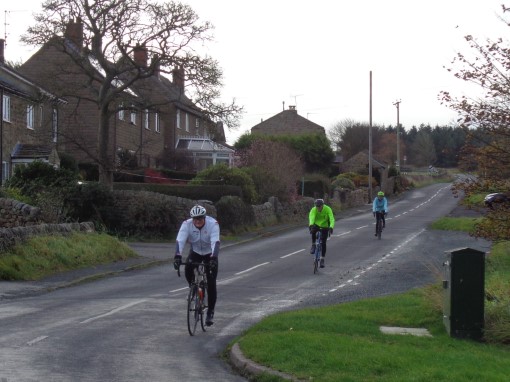 We had a good turnout at Low Bridge, in good cycling weather.
In the “B” team we had Bill W, Dave P and Theo. Dave P was not in for a long ride as was Theo, Dave P because he had had a bit of a “funny turn” at the week end, as with all old folk the funny turn was discussed amongst us, and it was revealed that Theo and Colin P also had similar “funny turns”.
This cheered Dave P up no end as he was now in the elite group for “funny turns”. Dave P was out to test the water (so to speak) a very short ride, so it was on Waterside and in to the Cafe, closely followed by Bill and Theo.
We now hold the EGs’ record for the shortest ride from Low Bridge to the first coffee stop! There were many cyclists and ex-runners in the cafe, and many hands were shook and the conversations were many and loud and humorous, much enjoyed by the three VEGs. (see photo).
On leaving we were joined by Peter Lawley with a pannier bag full of fruit and veg, causing Theo to ask if he was setting up a fruit and veg stall on Waterside? Then it was up the Beryl Burton track, the leaves were OK so long as you had low enough gears to prevent wheel slippage.
At the Greenway Bill and Theo headed right for Ripley (thanks for your company chaps) for more caffeine, with Dave P and Peter L heading left for Harrogate and home. A short but great ride. Dave P 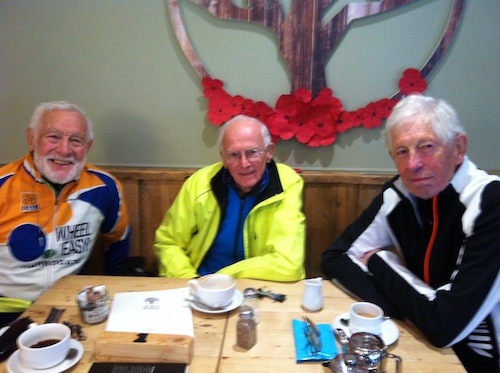 Bedale was the chosen destination, having been ignored for many months. The promise was as ever, to “go steady”.
Fat chance.
Our progress was brought to a very sudden halt at the bottom of the hill in Norton Conyers by a well attended meet of the Bedale Hunt, who had turned out in full, with at least thirty riders. Even though my personal sympathies lie with the fox, one could not help admiring the riders, resplendent in their formal outfits, and their magnificent horses, who were all frisking and ready for the off. Cheerful banter was exchanged between huntsmen (huntspersons really because they were 50/50 men and women), and cyclists, before we were able to continue on our way, catching up with our forerunners who had managed to get through the crush.
DaveW and Marvin elected for the shorter ride and diverted and the “steady” pace survived until about Kirklington, when, as could have been predicted, the hammer gradually went down, until we were flying. We were soon in Bedale, minus Dan and Chris, who had blinked en-route, and thereby been dropped off the back, only to take a wrong turn.
The Boutique café came recommended and although they didn’t serve beans (Hmmm), was otherwise a very pleasant lunch venue, with excellent service provided by an army of staff.
Notwithstanding our “café legs”, we set off with sights for Masham, via a roundabout route, Grewelthorpe (that hill doesn’t get any easier), and Ripon, which hosted our usual sprint for the Ripon sign.
Chris peeled of and the rest of us pottered home, satisfied after a great day out amongst excellent company.
Thanks to Dave W, Marvin, Colin, Dave P2, Geoff, Chris, Phil, and Dan. About 60M, dependent on which part of HG you set out from. DaveS. 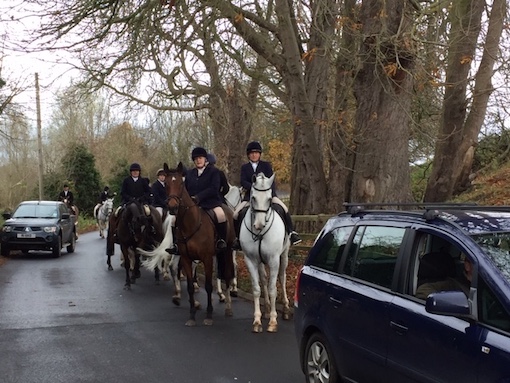