I was pondering the wisdom of the decision to set off for Low Bridge on a cool damp, is it really August Wednesday morning, when I met an equally bonkers or enthusiastic Norman. We commented on the weather and decided that I wasn’t early but Norman was later than usual so I agreed to push on and warn, I mean let the others know, Norman was on his way. Unsurprisingly numbers were down on what I would expect but five stalwarts were waiting including Bill who was about to be told Norman was on his way but no sooner were the words out of my mouth than he arrived. The others were Dave S, Nick, Geoff and Theo.

Various adjectives and nouns were considered as our number totalled 7, samurai and magnificent included. I misheard Dave S and thought he said sandwiches so I started doing some research on favourite sandwiches. Before I could do the subject any justice we met Dave W and we were eight, which made my research redundant although I will remember that Geoff’s favourite is Ham and mustard, apparently Dave S likes spam. Dave W was appointed leader and we set off towards Tadcaster; Norman, Bill and Theo having decided on Wetherby.

A campervan gave Dave W less than enough room so I caught it up at the roundabout on the bypass and smiled meaningfully at the driver, I’m sure that taught him a lesson! The two groups were already divided and the gap got bigger as we headed south into the wind. Where our paths diverged we did consider stopping to say good bye as they passed but the weather was so dull and autumnal we decided that they wouldn’t mind if we didn’t stop.

Dave W was so disgusted with the unseasonal weather that he threw his drinking bottle on the road, I think to vent his frustration that on such a damp cool day the last thing he needed was a drink. He immediately regretted his actions and stopped to pick it up, unfortunately Dave W has difficulty with reds (bottle top) and greens (grass where top landed) so Dave S found it for him. Geoff had assured me that the wind was from the south east but judging by the progress we made in catching Geoff and Nick once the complete bottle was reunited with Dave W I was sure there was some west in it.

Dave W came up with a cunning plan, we would ride to Tadcaster by a devious route and then we could cycle directly home or if the weather brightened up we could extend our ride. It seemed like a good idea until I punctured but it gave everyone a chance to rally round and be useful and helpful, a trouble shared with 5 mates becomes much less of a chore! We continued through the cold and damp on roads I hadn’t been on before. A day like this in January would be enjoyed!

We arrived at the Lemon Tree (take care in the courtyard at the back it is slippery!) 25 miles completed and settled down to enjoy our lunch. Our stop was leisurely, I can’t remember what we talked about only that Nick nicked my biscuit, I didn’t mind as I had already licked the chocolate off it.

Dave W led us westwards now as the sun poked its head out teased and hid away again. We returned via Bramham, Rigton and Collingham parting ways in and around Knaresborough.

I am pretty sure I would have postponed my ride let alone done nearly 50 miles if it had not been for the knowledge that someone would be waiting at Low Bridge, thanks guys for being there for me.   ChrisB.

Eight of us emerged from a large group of Wanderers’ riders assembled in the Hornbeam station car park to form a vanguard of speedy riders. We set off in light drizzle and although the forecast was not good we were all in high spirits at this early stage as we went up Leadhall Lane, Burnbridge and on to Kirby Overblow. At this point I informed the crew that at the request of tiny Tim we are going to include a small loop starting at the 90 degree bend and junction at Kearby cliff. This turned out to be a delightful single track road re-emerging at Clapgate.

After Sicklinghall we turned right down Northgate to Linton and Collingham up Jewitt Lane to Bramham. From there we followed the cycle path running parallel to the A1 called Paradise Way and turned left along a single track road called Spen Common Lane. For future reference you’ll know when you get there by a very strong smell of slurry (ideal for clearing the nasal tubes).

We then turned right at the end of the lane and left shortly after Tadcaster grammar school ,down another single track road to the newly constructed cycle/ foot bridge spanning the River Wharfe. Pictures were taken by Collette. We were now very near the Thorpe Arch coffee stop but to get there we had to follow an off road path quite slimy and at the end of which required a cyclocross style decent in order to get back onto tarmac

We all agreed to take the Harland way cycle path when we got to Wetherby. Unfortunately by then light drizzle turned into heavier rain and the path was very muddy. Now that did not bother two of us who were well protected from mud by equipping the bikes with mud guards but when we got to Spofforth the rest had soggy bottoms.

We returned to Hornbeam via the Showground by which time the even heavier rain was beginning to wash off the accumulation of mud. Another great ride parts of which many of us had not been on before undertaken in good company. Tony D 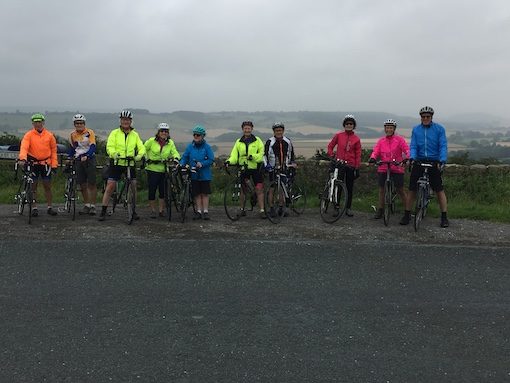 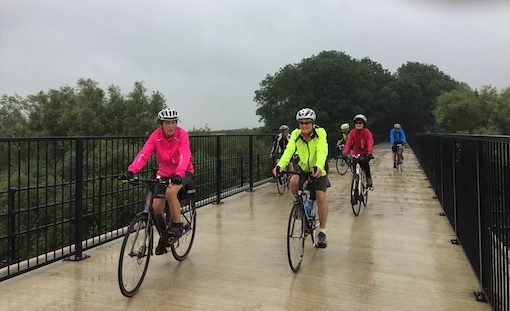 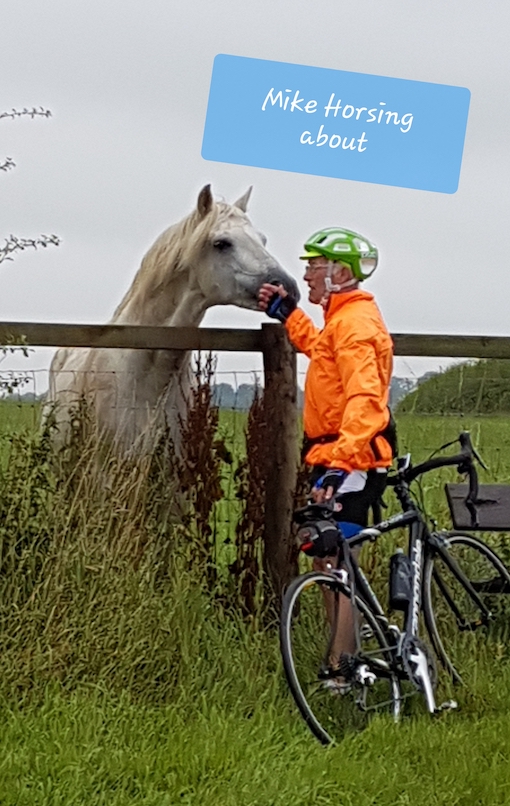 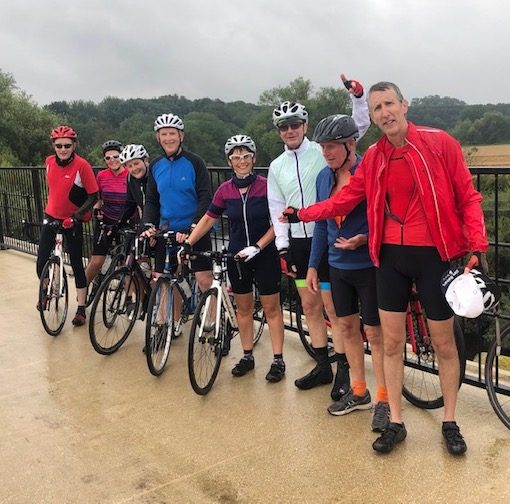 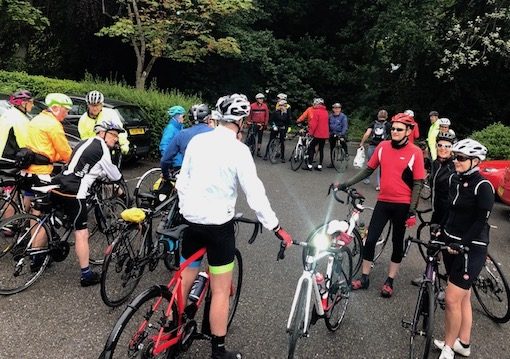 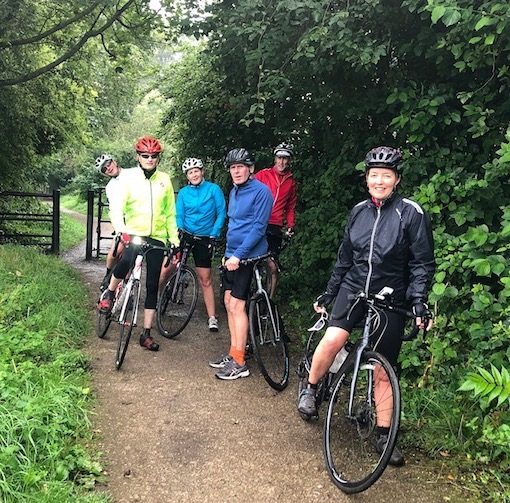 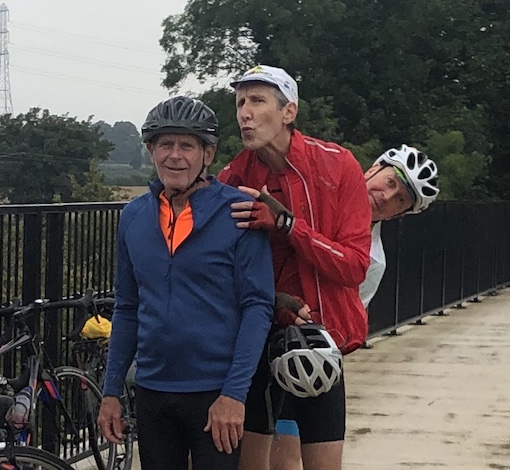 Early fears of a “Jonnie-no-mates” long ride to Masham today were dispelled at the eleventh hour by the arrival of two other regulars – phew!  Forecasts had indicated that going north would avoid the early rain and so it proved until we got past Fountains when a light drizzle started.  Heavier by the time we got to Grewelthorpe, the weather prompted a call at the Community Cafe for a welcome spot of elevenses after nearly 20 miles.  I hope we boosted their takings and moral, for it was a very quiet scene in the tearoom.

As there was no enthusiasm in the party for extending the ride any further north, a route back to Ripon was devised, taking in a loop through Mickley along unfamiliar lanes for most of us, before emerging on the barracks road and heading to Spa Gardens Cafe for some lunch.  The drizzle was showing signs of easing when we came away from the cafe, to engage briefly with two teams of bowlers preparing to start a fixture.  Suited up in white like forensic officers at a crime, they made an impact on the scene and chatted about our yellow rain-gear theme and who were the daftest to be out on a day like this.  We wondered about the effect of wet greens and woods on the finer arts of crown green bowling – Richard L wondered if it would enhance or reduce borrow.

As we crossed the bypass, the rain came strongly, soaking us to Knaresborough and flushing away my over-optimistic ambition to take tea at Boston Spa.  It was simply a case of heads down and get there, a strategy adopted by two other camper-cyclists we coxed and boxed with all the way to Knaresborough.  Assuming the bowlers got the same weather as ourselves, I wonder if they played on through it or took sensible refuge in the cafe.  Soon we saying our farewells at the golf club and heading for home in improving conditions, musing on the fact that this was our first soaking this summer despite the very mixed weather that’s plagued us in the past month or two.  September will be better!

Hardly a long ride at a mere 42 miles, it was enough for the day.  My thanks to Richard L and David R for their contributions to the day.  Let’s hope the heather is the star in next week’s Away Day ride to North York Moors. Terry S