Two Poddlers and two rehabilitatees from the W.E. hospital unit decided a gentle trip, in almost summer gloriousness to Boroughbridge would be the order of the day.   We had a very convivial chat with the E.G.s who were raring to ride into the sunlight…or was it an all day breakfast.

We continued to Arkendale turned left to Staveley and arrived at Boroughbridge as Nicola had her second puncture ever. Surjon suggested we had a coffee and cake before we tackled the tyre.  Disappointed with quality and value, we came out to admire Nicola and Surjon sorting out the puncture.

Our journey home was speedy and straightforward.  Nicola and Surjon surged on and Jane and I went steadily home, pacing ourselves perfectly. 27 miles on a day to be bottled.  Caroline G 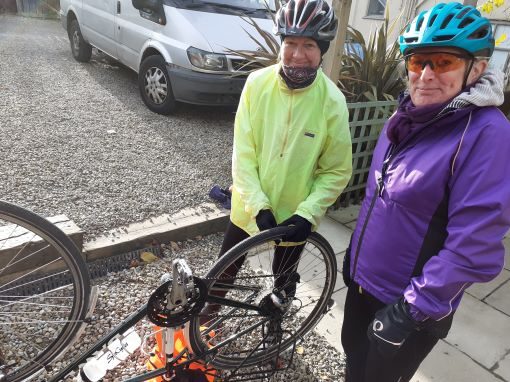 Another sunny autumn morning had brought lots of riders to Hornbeam. More than 20 decided on the Wanderers Ride. Tim Rhodes had agreed to do a longer, faster ride, so five men and Liz F sped off after Tim. The rest of us managed to divide into two groups and Colin kindly agreed to lead one group. We all met at Ripley having negotiated a number of dog walkers who couldn’t quite believe there were ‘still more’.

At Ripley, Colin discussed the route and we agreed it was a good idea to request the consultancy services of Mike Smith. They clearly did a good job as we met them all at G&T’s. We were pleased to see ‘Brian’s group’ there too. It was a beautiful Autumn day and the views towards the White Horse were lovely. We couldn’t quite see Vince and Tall Tim!  Paul B and John left us near the end of Brimham to return home by Rabbit Farm .

On the side road to Sawley, we saw three cyclists stopped. Sure enough, three Wanderers! Phil was busy mending a puncture for Margaret with Colin supporting. They soon joined us at G&T’s. Tim’s group had nearly finished by the time we  arrived- they’d done the short route along the main road. To make up for this, they were doing the long route home by Aldfied, Ripon, Knaresborough (Sorry there’s just your jacket in the photo, Liz). We sauntered home by Watergate Lane, having enjoyed a beautiful Autumn ride and lots of discussion. Thanks to Colin, Mike and Paul for leading/back marking. Alison N 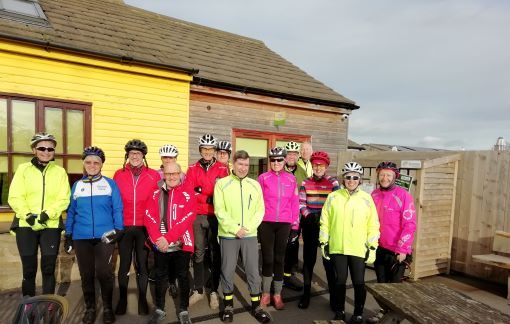 At last we had one of those crispy clear winter days as seven of us departed from Hornbeam Park. It was sunny but very cold early on.

We went down the Greenway only to re-group in Ripley where we all waited for Mike C who’d taken a phone call on the railway bridge. Onwards to Clint and through Burnt Yates and Brimham Rocks. Liz F was struggling up the hills with her legs constantly bent whilst peddling – I suggested her saddle needed to be raised by at least 4 cm. This I did after replenishments at G&T’s at Risplith and on the return journey she certainly felt the benefits!

It was a delightful ride back through Aldfield and Studley Park, along Borrage Lane in Ripon then through Littlethorpe, Bishop Monkton and Occaney. At the top of Copgrove Lane Liz and Chris left us to return via Scotton, Ripley and the Greenway whilst the two Mikes, Steve, Rob and I returned via Abbey Road in Knaresborough and Forrest Moor. We ended up doing 38.5 miles with about 2300 ft of ascent. All in all, a lovely ride! Tim R 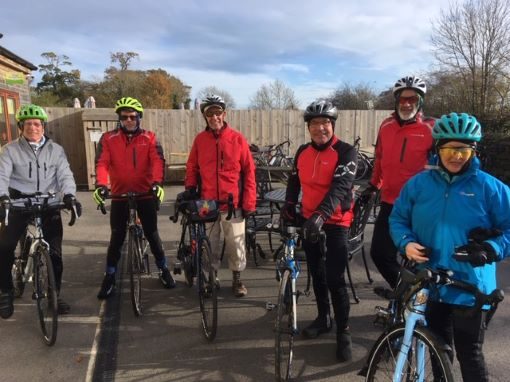 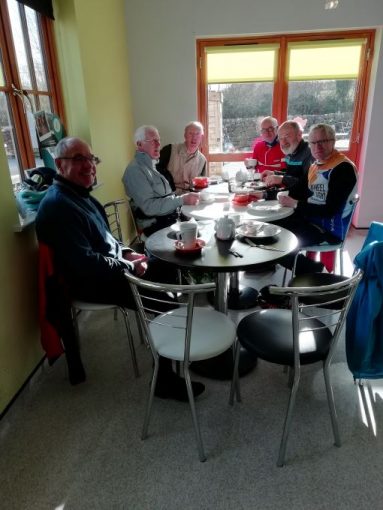 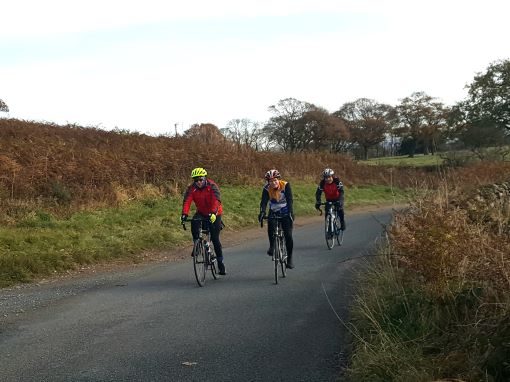 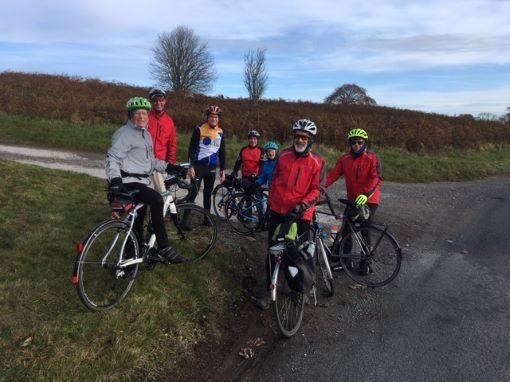 There was just a small number of us at Hornbeam this morning and we set off on a chilly morning with lots of lovely sunshine. The number of riders varied on the ride with people joining and leaving but generally we were in the region of between four and seven!

So it was over to Beckwithshaw and then over the moors for a climb up to Timble, And this lead eventually to the glorious drop down to Asquith in Wharfedale. We then dawdled along the lanes to Otley where we ate in the Bloomfield Square Cafe. Lovely coffee, but be warned no bacon sandwiches here as it is largely vegetarian.

The stroppy ride leader eventually got over his tantrum about not having a bacon sandwich and we all set off back across the river and climbed up to Farnley, then down and up around the steep lanes to come back on the road to Beckwithshaw. From here people made their way home on their own route after about 34 sunny but chilly miles. Martin W 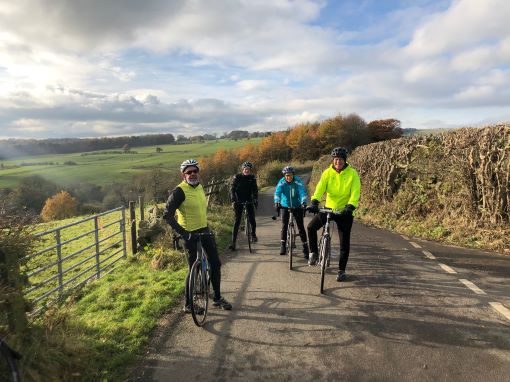 At 55 miles today’s Long Ride route aimed to respect the changing season by having two coffee/ thawing-out stops and to finish by about 3.00.  Four riders set out bound for a meeting with the Sacres at Little Ribston and were soon acquainted with the finger-nipping temperatures in the showground dip.  Another seasonal sign appeared in the grass verge at Rudding Park with a spectacular display of “mushrooms”, some as big as tea-plates.  Fungus ignorance dictated that they were left in situ – if edible, a knowledgeable person could have a grand harvest.

With Lesley and Richard safely in the group at Little Ribston, we headed for Cowthorpe and Rudgate, bound for an elevenses stop at Wise Owl, Boston Spa.  This volunteer-led cafe always has a warm welcome and today was particularly so, as it was comfortably full.  Drinks and teacakes downed, we paraded for a photo by the poppy wall at the war memorial outside the cafe – see picture.

The second leg of the ride took us via Rudgate, again, and Tadcaster to Bolton Percy where we turned northwards to cross over A64 at the Bilbrough services.  In pleasant sun, this leg was the most comfortable section of the day.  Arriving at Askham Richard, we found another full cafe but luckily two other cyclists were just leaving.  This was lunch, ranging from bacon and egg sarnies, “hyper-wedge” cake portions and a Siswickian plate of beans on toast.

Away from the cafe by 1.30, we were on schedule for the planned finish time and soon found ourselves back on Rudgate heading north to Cattal.  Once the sun had gone behind cloud, the psychological temperature dropped noticeably as the season re-asserted itself.  Through Hunsingore and Walshford, we turned south to the Cowthorpe intersection on A168 and thence back to Little Ribston where the farewells began as four headed to Knaresborough with Andy and me opting for Spofforth, Follifoot and the Showground hill to conclude the ride by just after 3.00 pm. A good autumn day out, with a sub-theme of Roman roads. Terry S 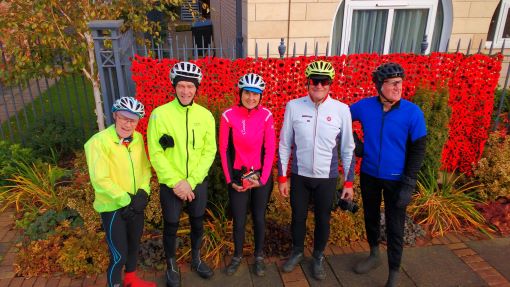 A ride of four quarters!

The first quarter was from Low Bridge to the Spa Gardens at Ripon for our coffee. The knitted poppies were still very much in evidence all around Ripon, and especially in the Spa Gardens. Ripon put on a magnificent display of poppies last year to commemorate 100 years since the Armistice of 11 November 1918. This year, the displays were even more plentiful, as this too is a very special year, commemorating 100 years since the 1919 Treaty of Versailles, officially ending the Great War. It would be good to think that our country may continue to give Remembrance Day greater importance following these two very significant years. Spa Gardens was all the more spectacular bathed in glorious sunshine. Nine A-teamers had made the trip to Ripon, and we were delighted to be joined there by Norman, usually with the B-team, who arrived on a solo ride.

The second quarter took seven of us via Grewelthorpe to Masham, as Norman, Chris and Dave P(2) had returned to Harrogate from Ripon. Three (Dave S, Dave W, and Geoff) opted to stop for lunch in Masham before taking the flatter route home, whilst four grazed on the move, picking up a sandwich or snack bars, to continue onwards and upwards.

The third quarter was indeed very upwards, via Trapping Hill and Lofthouse to Pateley Bridge. After the morning sunshine, temperatures dropped from 2pm onwards, and but we were still blessed with a crisp Autumn day, with Autumn sunshine and glorious colours. Leighton House reservoir was brimful, and the long range views as far as Teesside from the top of Trapping Hill were worth the climb. With the temperature just two degrees at the summit, it wasn’t a place to linger for long. Colin P pressed on for home concerned about the failing daylight; Peter B, Dan and Eric stopped at Tea Cups for tea and hot puddings with custard – well deserved, and much needed fuel for the grand finale!

So onto the fourth quarter from Pateley Bridge to Harrogate. Peter opted for the main road to Ripley and then Jennyfields. Dan was sure the most direct route to Harlow Hill was via Yorke’s Folly/Two Stoops, Menwith Hill and Little Alms Cliff – not exactly what my legs needed! But if that’s shortest and quickest, as it’s getting dark, then that’s the way it must be. What can I say? The views were non existent as it was pitch dark for most of the way, and the temperature continued to fall to just above freezing. Arrived home at 5.20pm. I knew I’d been on a ride!

63 miles and 5,100′ climbing for the two Harlow Hillbillies. Eric W

A good turnout at Low Bridge but there was some confusion among the “B” team if this was the Wednesday for the funeral of Dave Watson`s wife. Eric confirmed it was next week, so the “A” team headed for Ripon and possibly Bedale. A sole “B” teamer headed for Boroughbridge part way with Eric before taking hot coffee and an excellent toasted to perfection (both sides) teacake at the top cafe.

Then on to Roecliffe, Markington and Ripley and home via a less than Greenway, in fact a bit muddy with lots of wet slippy leaves and much care had to be taken. However it was excellent cycling weather in itself and the Poddlers were seen enjoying it also. Dave P 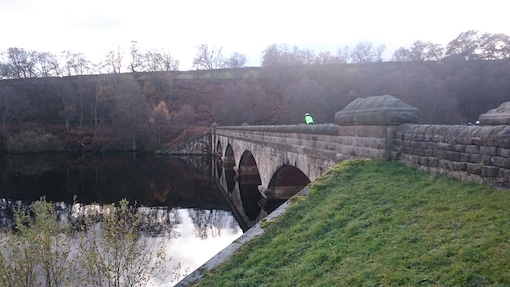 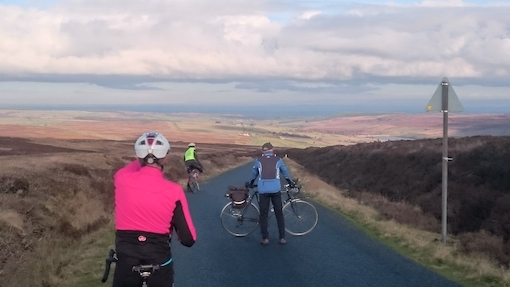 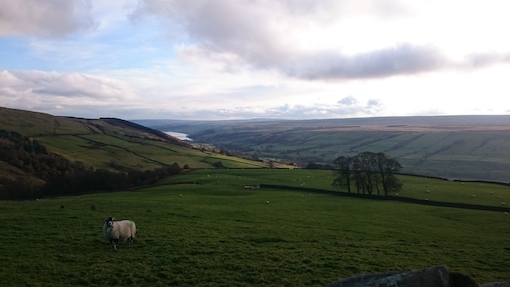 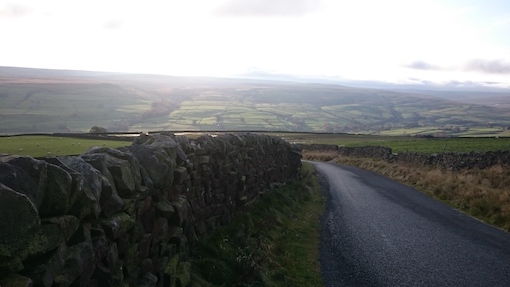 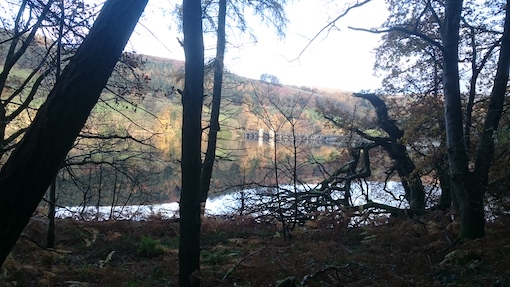