Any shepherds who were worried by the beautiful sunrise needn’t have been, what a beautiful day! Not too much breeze and lots of sunshine. A small complaint is the sun was low for most of the day and affected visibity, something to be mindful of in terms of keeping safe. Numbers were depleted at Low Bridge due to a mixture of falls, spills and illness. We did get a chance to admire Martin and Yvonne’s electric boosted tandem as they stopped (possibly in an attempt on the how many different Wheel Easy ride report mentions record) on their way to Ripon. I compared notes on adventures and some technical stuff, not to mention whether the stoker should have any controls at their disposal.

A modest ride was planned, towards Ripon then to Boroughbridge for a cafe stop. The weather was lovely and spirits were lifted as we headed out of Knaresboro via Lingerfield for a change. Bob left us to plough his own furrow while Dave S, Dave P2, Geoff and Chris continued to Ripon by the usual route. On the way we picked up Pete B whose lateness was exacerbated by a broken gear cable. Pete joined us for a while, it was great to see him, a nice surprise but he turned back to fit a new cable stopping at Spoons on the way.

As the festive season cobwebs were blown away we made good progress. The bright sun made everything look better and much harder not to be in good spirits. It showed off the colours of a soaring Kite which looked stunning as it glided above us. We were in Plenty at Boroughbridge by noon discussing the relative merits of Eddy Merckx’s and Cav’s joint record TdF stage wins. Possibly due to the recent spate of injuries rehab exercises were also shared, I wonder how many of us will be trying them out?

A decision about the second half of the ride had been left until the coffee stop. Daves P2 and S with Geoff decided to head back on a fairly direct route via Minskip. Chris headed towards but not as far as Bedale returning to Ripon and then retracing the outward route.

A lovely day and good to reconnect with the old fellows, lets hope those absent return soon. We were thinking of them and I suspect there will be some wondering why they have burning ears. How long is it OK to say “Happy New Year” btw?

Five go on a ride to Fountains

On a beautiful morning there was a depleted number for the Wednesday ride with only 5 riders opting for this ride. This inlclude Kirsty who was trying out her new bike on a hilly route for the first time.

The ride out of Harrogate was along the Greenway which was uneventful other than Kevins slide on leaves and his recovery to stay upright!

From then on we went up Scarah Bank on to Warsill and up to Brimham Rocks where we took in the beautiful views over the Moors before descending to Sawley and the back road to Fountains and the visitor centre for coffee.

Stuart and John,on a lone ride, were already enjoying a coffee but there was no sign of Martin and Yvonne who we were due to meet. They arrived as we were about ready to leave having taken an early coffee stop elsewhere before this one!

As we were due to leave we met up with Liz who had ended up on a solo ride and who took up our offer to join us on the ride back. We had decided to try the Western Lane route home to see if NYCC had solved the problems with the road which had led to it being closed.

Now a group of six we went past the Traveller camp but Kirsty needed to get back so she went via Watergate Lane home ,expressing she was pleased with her new bike,so we were back to five.

Western Lane was fine and safe to ride and we made our way home via Markington,Ripley and the Greenway. It was a lovely days riding with blue skies and sunshine.The wind was a slight problem on the tops but well worth the effort.

Thanks to James, Charlie, Kirsty and Monica for their company ( and Liz on the the return journey). 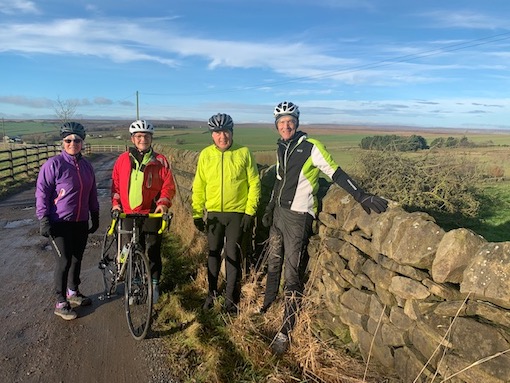 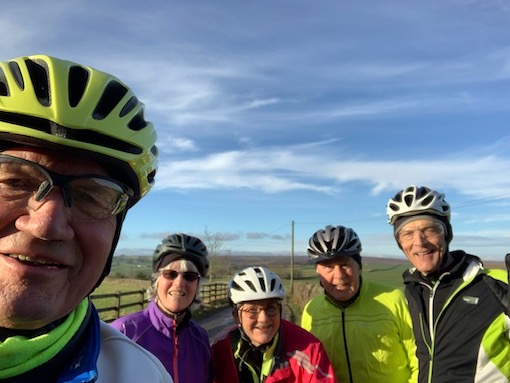 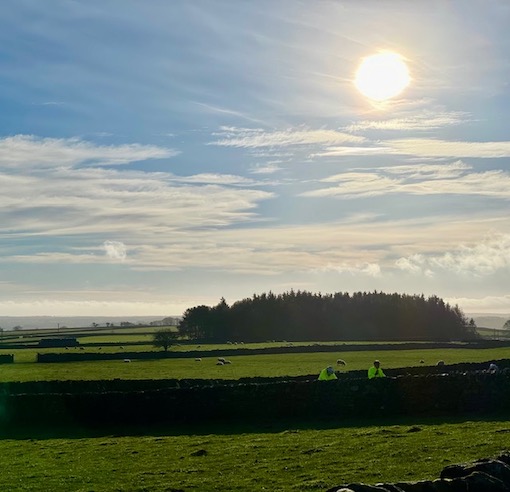 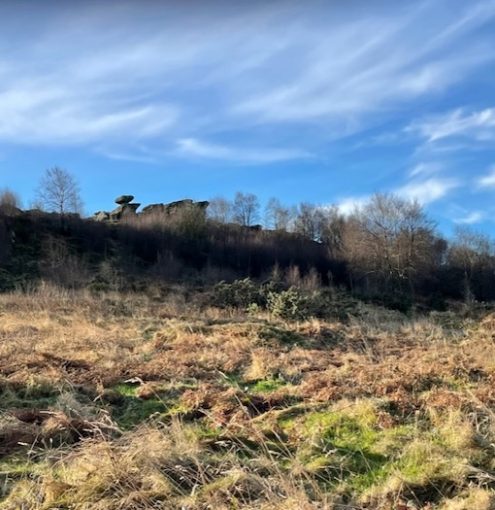 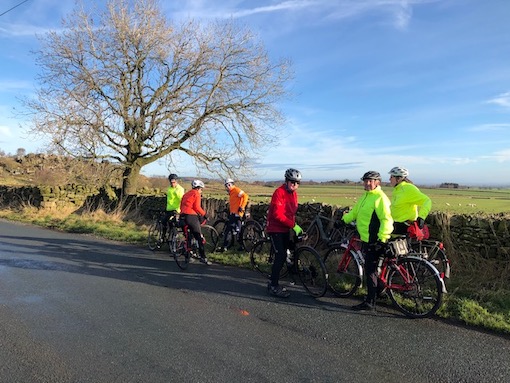 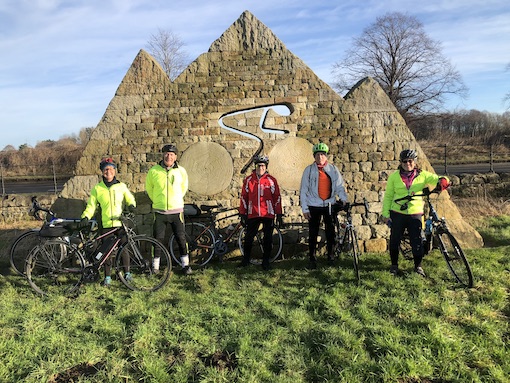 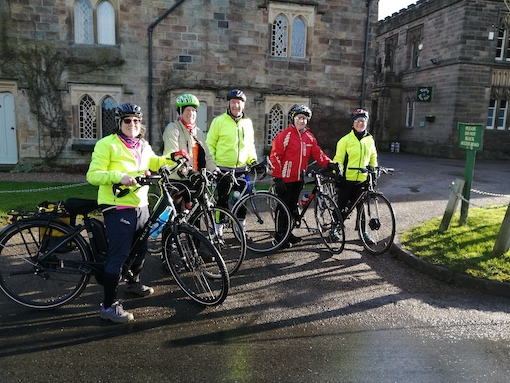 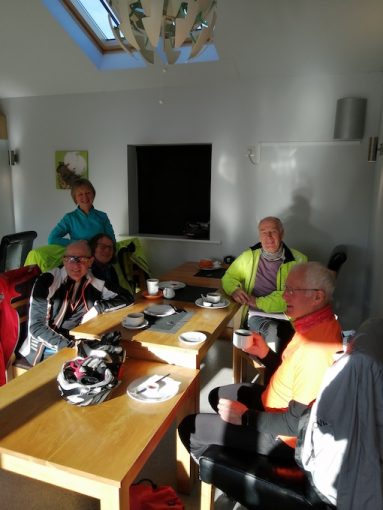 A great day for a short ride to Kirkby Overblow, Stockeld Park, Spofforth and Follifoot. Beautiful views and sunshine. The route through the park was new to some and Paul reflected that he had worked at Spofforth Hall when it was the Leonard Cheshire Home. Brian knew lots of mountain bike routes, more suitable for a drier day underfoot, Dennis powered up every hill going, while Sarah and I sedately allowed our machines to take the strain.
A lovely ride, good company and 20 miles. Sarah and I celebrated her retirement yesterday with delicious lattes at the outdoor cafe at Fodder. Gia 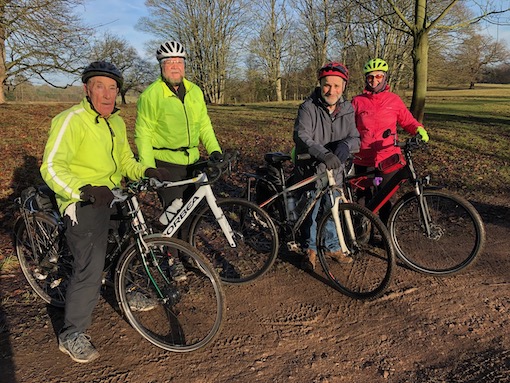 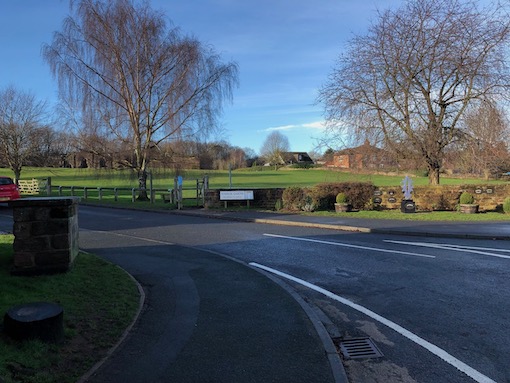