Alison appointed me to lead the first group of Wanderers, I knew that to keep Alison’s high standards of leadership I had to be on my best behaviour.

Sally, David, Colin, Chris and Richard followed me through the back streets to the Stray, and a tour of Bilton to reach Knox. After dicing with the traffic on the Ripon road, we  managed to get safely across and up Grainbeck Lane which had turned into a rat run with lots of cars and a impatient van driver. Down Lund Lane to Hampswaithe to await the other groups of Wanderers.

Alison checked I had everyone intact and sent me off and this is where it turned into a maths lesson, I had four, then two joined us up Clint Bank, then another two added made nine. A swoop down to Birstwith, then along to the Toll Bridge. As Alison put me in charge, what power, I told all the route up Stripe Lane and to stop at the top for banana break. I had two naughty boys who were confused by my place to stop and when caught got a good hiding.

Lovely views as we cycled through Brimham Rocks, Corinne trusted me with her mobile to take the group photo, somehow my alien powers sent the photo haywire apologies to all!, Keith on his stealth machine shot off in front as we did a right and a left to Sawley. On to G&T’s for lunch and soon after all the other groups of Wanderers arrived. After a social chat with friends we had not seen for a while, I set of with the first group, but Helen and Keith stayed behind and now I had seven.

Back to Sawley, down the Lane to turn left then right up Watergate, then just before the steep hill, Chris had a puncture. What is that saying ‘ those that are first shall be last’! After various comments from the group and attempts to get the new inner tube in by Chris, it was turning into a comedy scene. Colin’s son stopped I think amused by the cyclists in various poses as Chris struggled with the inner tube. Finally Chris got the wheel back on and we set off, up to the top, down to Ripley and then various routes back home at the end of Bilton Greenway. Thanks to Colin for back marking around 35 miles of fun fun fun. Liz F 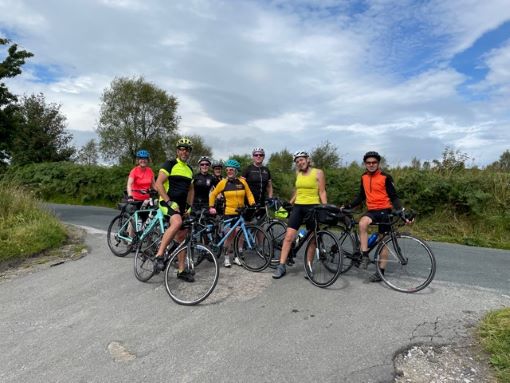 Once again there was a large group of Wanderers at the Showground.We welcomed two new riders, Chris and Will. Knowing we were ‘picking up’ more on the way, it was sensible to set off in small groups to meander through Bilton to Knox Bridge and then regroup at Hampsthwaite.

Here, Liz F whizzed off with a group of eager riders, Keith M  kindly took another group, and the rest of us formed the third. It was a perfect day for cycling, not too warm, but sunny as we made our way up Clint Bank Lane, down to Birstwith and along to Hartwith. Will decided to make his way back here while the rest of us made our way up Stripe Lane. Congratulations to Paul who rode all the way up for the first time.

We agreed the climb was well worth if for the views.  After that, it was a beautiful ride to G&T’s where we meet up with the others. Everyone agreed that Watergate Lane, Markington and Ripley was a good route back to Harrogate. A very enjoyable morning with lots of friendly chat. Alison N 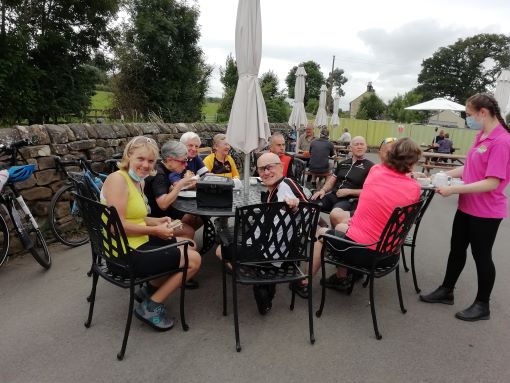 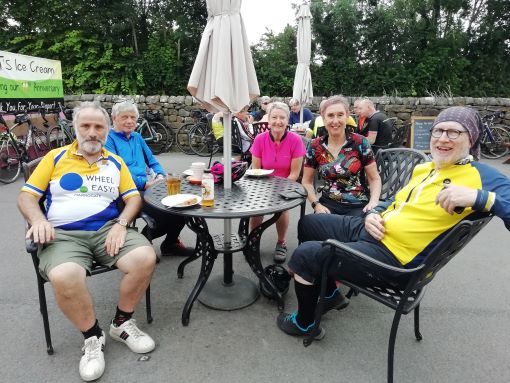 This week’s group on the Wednesday Ride comprised Gia, David, Tim, Kevin, James and after Ripley Paul as well. From Ripley we criss crossed paths with the Wanderers on the way to Brimham and then down to Sawley and onto Fountains where Paul returned home for Grandparent duties. Despite protestations about the late hour for coffee we descend through the deer park and into The Olive Tree for an enjoyable coffee break with Martin and Yvonne who had arrived independently.

The homeward route was Bishop Monkton to send James straight to Knaresborough (to clean and disinfect his shoes!), whilst the remainder heard for Markington and the Greenway. About 38 miles in good weather and with good company.  James G 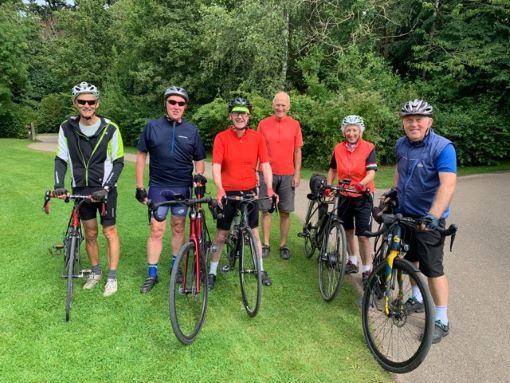 It was good to see old friends and a large gathering at the start. Such were the numbers for the Medium Plus Ride, that it was decided to form two groups. I was in a group of six – Andy, three Tim’s including me, Nick and Tony. We did a version of WE route 264 but instead of going through Burn Bridge to Kirkby Overblow we went to top way along Rudding Lane and along the by pass.

Weardly Bank was the steepest climb of the day after which we cycled past Eccup reservoir, along Wigton Lane with its lovely smooth road surface, then through Scarcroft and along Rigton Ridge to Bramham and Clifford to Da Carlo’s Italian cafe in Boston Spa. Four of the party had a No7 on the menu which was a tempting roast chicken, with sun dried tomato, mozzarella and pesto pressed toasted panini whilst the remaining two had fat rascals.

We returned along the recently resurfaced cycle path which runs besides Wetherby race course into Wetherby, then back along the usual route – North Deighton, Spofforth and Follifoot. A 40 mile ride, perfect weather, good company – what’s not to enjoy! Tim R 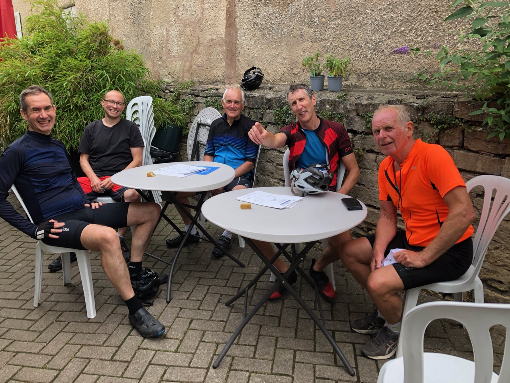