About twenty people decided that it would be worth turning out today for a ride and they were right. A wet half hour replaced by sunshine, a gentle breeze and lovely views. The weedy option of a ride down the Greenway to Sophie’s was extended at Ripley to take in Hartwith Toll Bridge and Stripe Lane including waiting patiently for the flock of sheep to travel for their spring scans. I.e were they having singles, twins or triplets! Liz F, Tim R and Rob continued to complete the designated route, the rest of us opted for Burnt Yates, Clint and Hampsthwaite where we met Jill’s group who had arrived there by a different route. Well worth turning out in the end for a sunny early January ride. About 26 miles. Gia 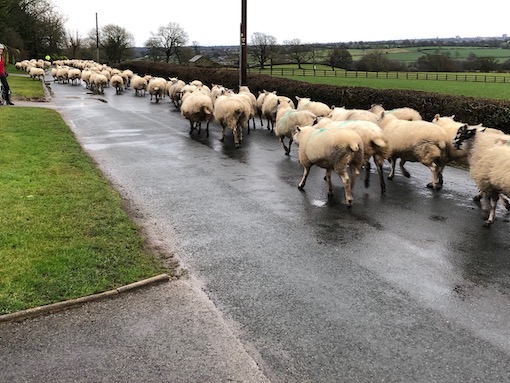 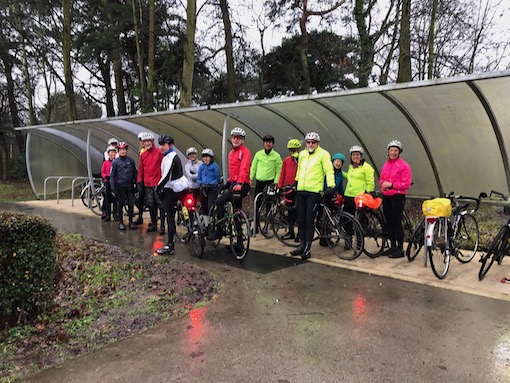 On an extremely wet morning there were just 3 of us for the Medium Ride. At that point, both the BBC and Met Office forecasts had been correct. However, they disagreed on their predictions for the rest of the day. We decided to be optimistic and go with the Met Office.A good choice as it did indeed improve soon after 10.00am. We made our way along the Greenway, through Hollybank Woods and up Clint Bank. Here we noticed chunks of blue sky. By the time we’d glided through Shaw Mills and up Cut Throat Lane, there was sunshine all around .For the rest of the ride we enjoyed plenty of sunny periods. There was lots of surface water and muddy patches, thanks to the overnight rain. We continued through the rolling country around Knaresborough, through Markington, Bishop, Monkton, Farnham, Lingerfield and Knaresborough. We had coffee at the Ugly Duckling- relaxed atmosphere and cycle friendly- and then up to the Golf Club where we went our various ways, Thanks to Liz and Al for the company and chat. Alison N 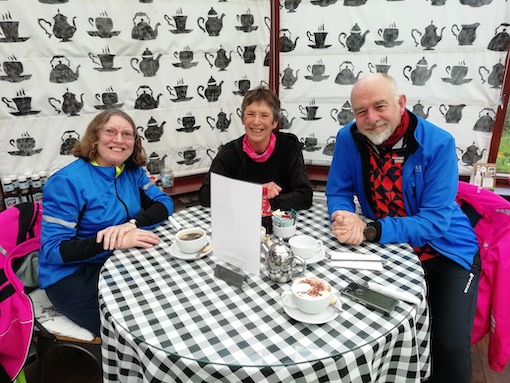 This morning was rather wet and a few hardy souls gathered at Hornbeam in the cycle shelter. The rain pelted down and most of the rides on offer were short rides to the nearest coffee stop.  Tim, Robert, James and Sue joined me on the published route to Brimham. Sue and James said they would return to Hampsthwaite at the top of Stripe Lane. A change to the published route is that we would cycle down the Greenway to Ripley and through Hollybank wood and turn right to Birstwith. Most of the cyclists who had turned up at Hornbeam this morning followed this route. On reaching Clint Bank a voice from a van shouted that a flock of sheep was heading towards us. The cyclists were shepherded into the right as the sheep and tractors passed us, Sue acting as official photographer took a group photo of the sheep! As I gathered my sheep, Gia and her group followed us down to Birstwith and along to the toll bridge. Once over the toll road we turned right and up to Stripe Lane. The sun was now out and it was quite pleasant as wet hands and clothes began to dry and the climb warmed us up. At the top Tim, Robert and I carried on to Brimham. Sue and James joined Gia’s group and headed to Sophie’s. The rain had now stopped except for slight drizzle and we cycled through Brimham with a spectacular rainbow over the rocks and hills.  Through onto Sawley, turning right down the lane which was full of tree debris and wet but managed it without incident and up into Fountains Visitor Centre for scones and drinks. After talks about cleaning cycles, stolen cycles, cycle insurance and bike locks we returned to our bike to find they were still there thank goodness. It was now quite pleasant but decided to go home via Watergate Lane down to Ripley and home along the Greenway. 34 miles. Very dirty bikes to clean but glad we had been out for a cycle ride. Liz F 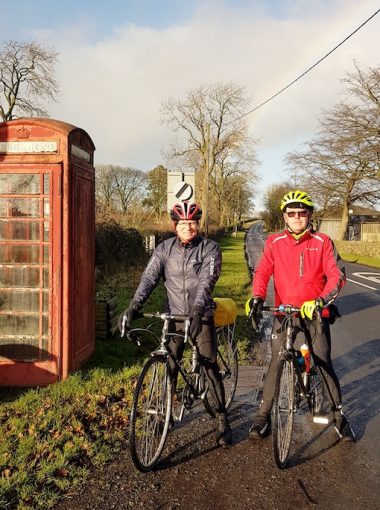 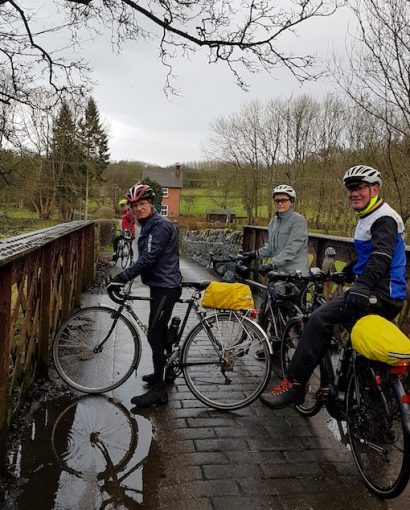