Route 211 Easingwold was decided as the ride this week, but we would go in reverse to mix it up. 09.00 meet at Hornbeam Grant D, Paul B, Darcey G,Trevor G and Dave R were the group from here. Met Chris B at Bilton Hall then out to Sandy Bank where we met Martin B, Johnathon W and a late arriving Mark C.
Route was Milby to Little Sessay Hutton Sessay over A19 to Coxwold all at a wind assisted 18mph average then on to Easingwold via Oulston. Cafe was at at The Olive Branch on the square, once refreshments were taken it was a quick peloton picture in our new pink kit for the Saturday group, the name is taken from our whats app group The Contrarians as we could never decide where and what time to meet for rides.
The return was tempered by a very strong wind and changes to the front of group were at very regular intervals. Route back was Alne – Aldwark Bridge -Great Ousburn -Marton where we said goodbye to Chris B and Dave R who were struggling with the head wind. On to Sandy Bank where Martin B left to head home to Boroughbridge. Then the remaining 5 riders had to face the return up Knaresborough hill where the group said its goodbyes to return in our home directions. Home for 13.15 just as the rain started 53miles 2,382ft climbing at a not to shabby 16.4mph Grant 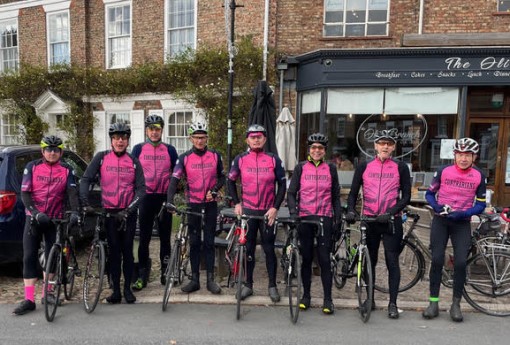 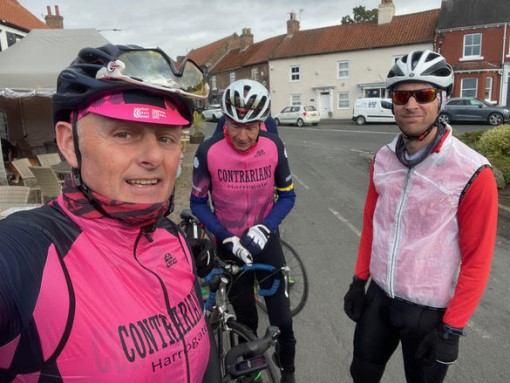 Plenty of brightly clothed enthusiastic Wheel Easy members at the Showground today and a ride for everyone. The short ride advertised as 20 miles came in just under and perfect for our new rider Justine on her first Wheel Easy ride. Her husband Steve has been riding with WE since May and is getting to know the area. The group included three ex chairs, John, Paul and Gia, one founder member Malcolm who met us at Sophie’s, Bob an EG who guessed right that he could meet us at Burley Bank Road, Joe, Geraldine and Paul, medium and Wandering riders and Bianchi Bob.
An excellent ride in lovely sunshine although a little windy and “marshalled” part of the route by the Nidd Valley Run. Relaxing coffee stop at Sophie’s especially when John finally go his bacon sandwich. Well done Justine, glad you joined us and enjoyed the ride. 19 miles Gia 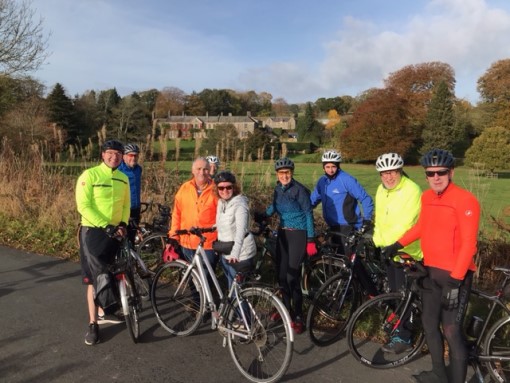 There were just 5 takers for the medium ride today, Chris, Chris, Mike, Fiona and Alan.  We rode Route 14 (Wetherby, Cowthorpe) and detoured down the recently tarmacked track to Thorpe Arch for coffee. The ride was generally uneventful, except for an impatient motorist who shot out of a junction as we were trying to turn into it. Too close for comfort! A great ride, at a very steady pace, on a lovely autumn day. 28 miles. Thanks for the company.  Chris and Chris 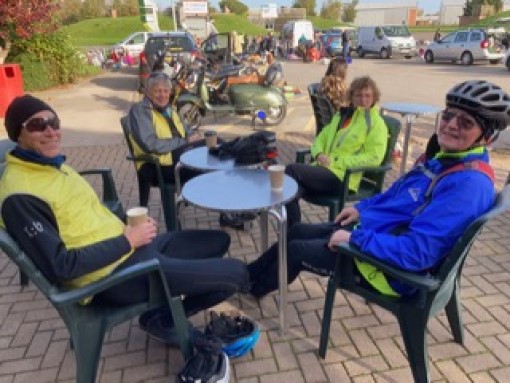 My turn to lead again and, today, I resolved to be the epitome of tact and diplomacy.  In the light of everything in the press recently about what is, and is not, just jolly banter, my lips are now sealed on the subject of Tight Fisted Yorkshiremen, Mean Scotsmen, Southerners and The French.

We were a group of ten which naturally divided into two cohorts of five, regrouping occasionally as we made rather swift progress to Boroughbridge and then on to Ripon via Skelton-on-Ure.  There was a slight whiff of rebellion in Ripon when it dawned on some members of the group that this was not the coffee stop and we had to slog on to Risplith.  We comforted ourselves with a small snack before turning off towards Galphay and the start of what the Ride Calendar called “some hills”.  The mood remained cheerful in the bright sunshine and stiffish breeze and we were all grateful to finish the last hill before the oasis of G&T’s.  All the usual varied topics were covered including new boilers and thermostat wars in our respective households.  Unusually, it was the ladies who mainly favoured cooler temperatures and controlled the thermostat. That’s women for you!!

After a relaxed stop, it really was a short, easy route back home via Sawley and Ripley, so there was some advantage in having the later stop and not tackling “some hills” on a full stomach.  It was a delightful ride in cheerful company and particular thanks to Mike W for doing a bit of shepherding at the back and for reminding me how to count to ten. Were it not for Mike, I may have returned with far fewer chums than when I set off!  Helen T 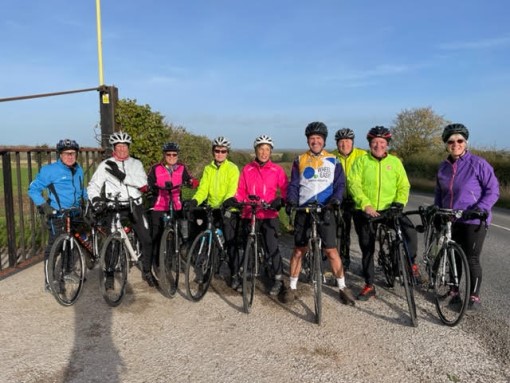 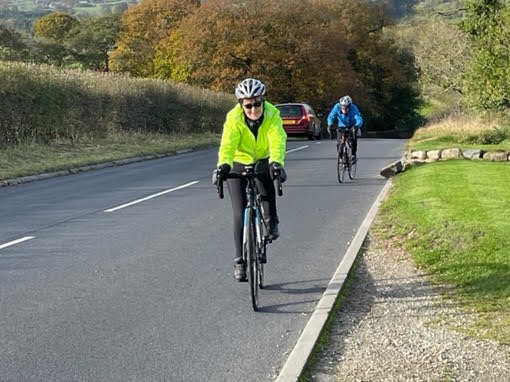 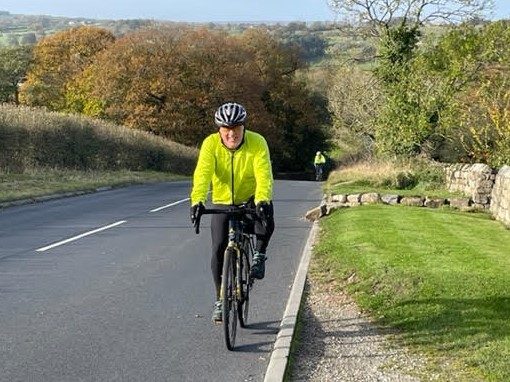 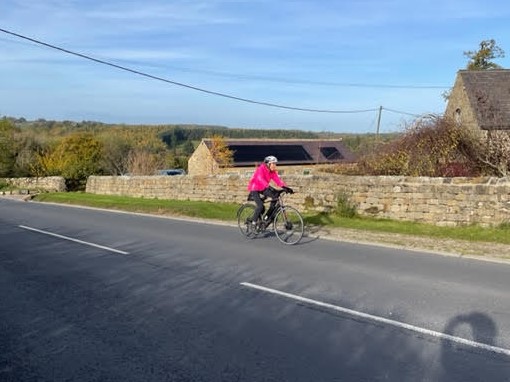 Route 201 in reverse to try to ameliorate the effort on the hills around Sawley & Grantley. Besides this, punctures & wind were the main features of the ride today. A puncture for Vince on the Greenway & then one for T(2) (a.k.a. “the nice one”) on Hebden Bank. This 2nd puncture took some fixing mainly because Tim’s tyre seemed to be made of the least flexible & malleable rubber known to man – a real team effort to get it back on the rim. It remained dry & sunny throughout & thankfully some of the route back was wind assisted. 40 miles. Tall Tim 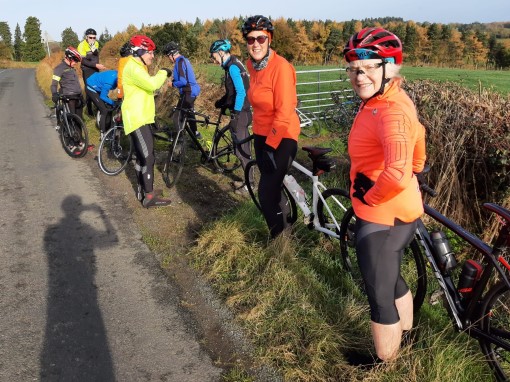 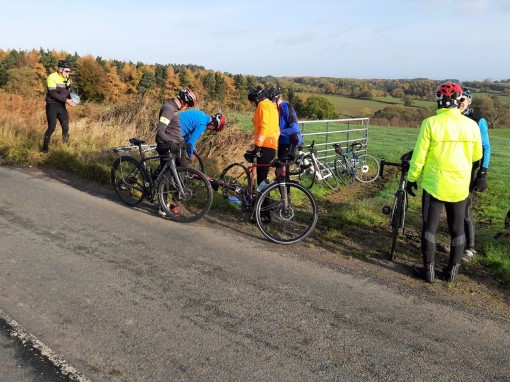