Seven of us on today’s ride out to Arkendale via the Beryl Burton way to Knaresborough then on to Lingerfield, Farnham & Ferrensby to Arkendale. Returning via Staveley, (where Sue T. left us) we continued on to Copgrove, Burton Leonard, Wormald Green and Markington. Onward to Drovers X Roads, back down to Ripley for coffee. Home along the Greenway. About 30 miles at nice easy pace on cold but wind free day D.B.

On a rather grey, chilly morning (so different from last year), 10 of us made our way through town to Knox Bridge, through Hampsthwaite, up Clint Bank (beginning to warm up), onwards towards Brimham. On the way, we noticed so many spring flowers and chatted about the TDY (It’s been great to follow the race through so many familiar places). Going down Stripe Lane for a change, the views were beautiful. Everyone was happy to try Birchfield Farm café. Some of us were a little alarmed by the access track. However, there was plenty of space, the service was friendly and efficient and food and drink fine. We retraced our route to Hartwith. It was quite ‘odd’ coming the other from usual way over the bridge. Then up to Birstwith and Clint Bank. Here, most people elected to go straight back through Hollybank woods. Two of us chose to continue to Bishop Thornton and back to Ripley that way. Once again, a very pleasant ride in good company. Thanks to all. Alison N. 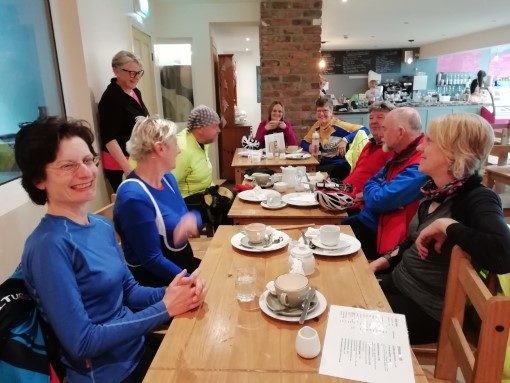 A ride to York on a chilly May weekend did not seem very attractive and the appeal of Toft Gate Barn Café at Greenhow summoned 10 of us. We chose the Birstwith Thornthwaite Padstow route to join Duck Street about three miles from Greenhow. Turning in to Duck Street we were treated to the spectacle of thousands of riders on the Tour de Yorkshire Sportive coming towards us enjoying the downhill section.
Our second treat was that the road to Greenhow and Toft Gate was closed to traffic and third treat we saw Angela gamely taking part in the Sportive.
We arrived at Toft Gate, met Malcolm celebrating his birthday having got up to join a dawn chorus walk at 5am. He came on the Brompton, used the 24 bus and followed the Sportive up Greenhow Hill to meet us.  Excellent café stop, new to some of our group as was the descent down Peat Lane and a fast run along the main Pateley Road to Hartwith Toll Bridge.

A great ride, over 40 miles and according to Mike 4500 feet of climbing.  Home in time to watch the tour riding through very familiar territory. Very proud to live here.  Thanks everyone for joining this ride today, Gia. 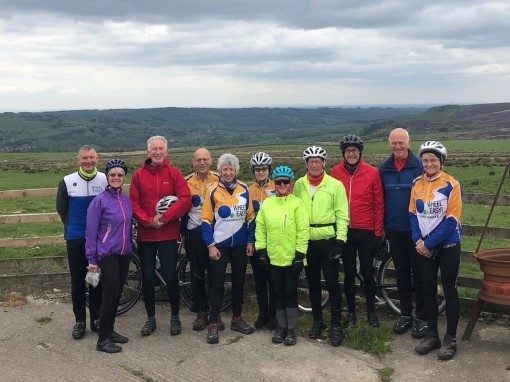 Lot of discussions at hornbeam this morning, shall we go long to ride out to see the TDY?
Timings were wrong and it was decided that we would be stood around for too long on a cold day.
Five then decided to head towards York, a brisk pace was set from the off probably due to the cold and the fact that I had decided to be in shorts brrr cold. York was reached in record time to discover a short detour to cross the river due to path improvements. Refreshments were had in Cycle Sense where we got the last serving of beans!!!! A café for cyclists running out of beans at 11.45am!!!!
A quick look upstairs at bikes we could not afford, then it was back out into the colder day by now to return at our usual route via race course to Askham Bryan where a short detour was needed as road was closed and the sign said closed to Horses Bikes and Pedestrians. Good progress was made towards Tockwith via Wighill where Martin pinged a spoke.  Quick repair with cable tie and we were on our way. At next cross road we said goodbye to Martin then at Knaresborough junction we lost Johnathon. Grant, Paul and Darcey returned via Follifoot and the Showground hill.  Still home to see some club members on the TV at Bardon. 63miles at brisk 16mph average. Grant.

With no defined Leader yours truly set off with two or three other riders heading for Skipton. When we reached the traffic signals at Leeds Road the head count had risen to eight. Whilst riding along Leadhall Lane there was some discussion as to which route we should take. This was quickly resolved as we turned onto Brackenthwaite Lane and headed for North Rigton. On approaching North Rigton we were met by the TdY Sportive, a very impressive sight. It was now plain sailing to Ilkley where a passing cyclist, after some jolly banter, was invited to join the group for a photograph! Glyn left us at Ilkley to return home. Although the café stop was supposedly at Skipton the group agreed to stop at The Tea Cottage for refreshments. Here PCJ stated his intention to leave the ride and return to Harrogate to see the TdY. After some detailed discussions as to the route and timing of the TdY, two riders set off to Embsay moor to see if they could find the tour. The remaining riders set off to return to Harrogate via Appletreewick, Stump Cross and Menwith Hill, with the exception of Peter R who looped back to Ilkley. PCJ 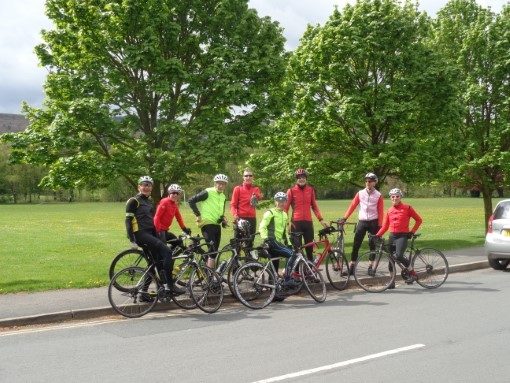 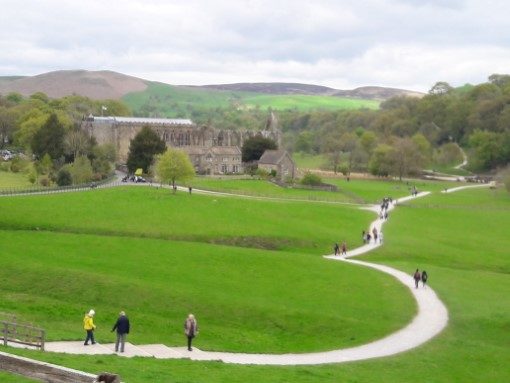