Eight of us set out from the Showground on the first ride of this year and my first ride as leader since I don’t know when. We followed WE Route 66 which was a hilly route taking in Brackenthwaite Lane and Norwood Lane before heading northwards past Menwith Hill to Darley.  Andy joined us (Helen, 2 Mikes, Margaret, Steve, Liz P, Colin and I) at Little Almscliff having pealed off from the faster group who were doing the same ride as us.

We kept regrouping along the way which gave us all an opportunity to chat even more than we had been doing whilst cycling along at a very steady, sedate pace. Refreshments were taken in the covered shelter at Sophie’s before continuing for home via Knox and Bilton. Timing was to perfection as it began raining just as we had finished the ride. Thanks to Andy and Margaret who stayed with Liz who got a puncture just as we got to The Stray.

It was a great ride to start the year, the weather was kind although a little gusty and the group were very well behaved – I was complimented on keeping them in check! 26 miles at an average of 9.7 mph with 2270 ft ascent.   Tim R 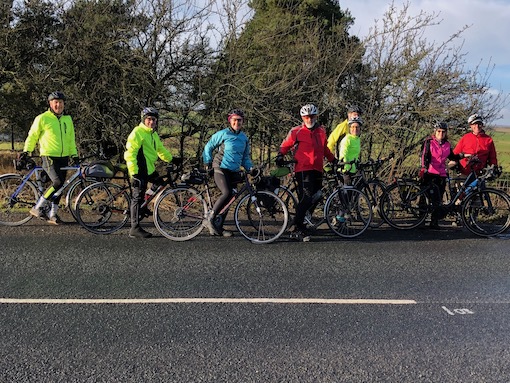 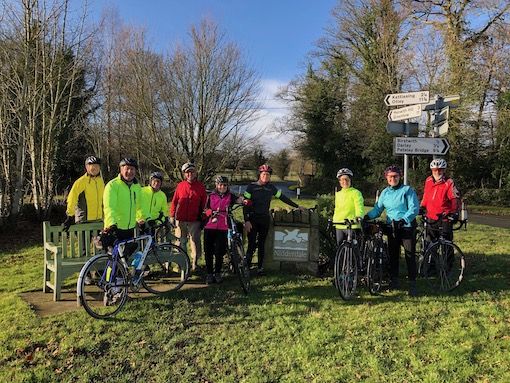 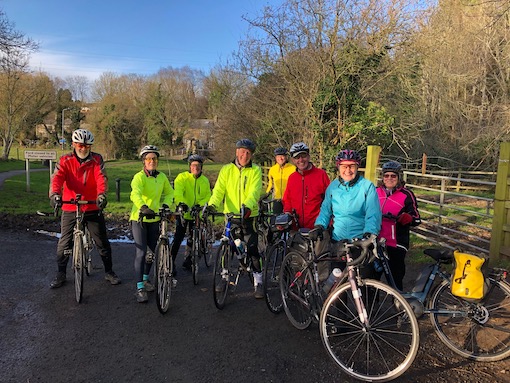 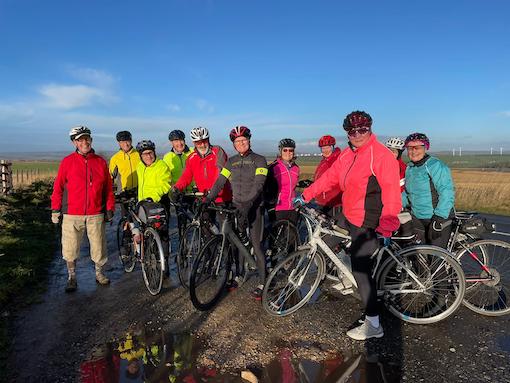 Happy New Year and a great turn out of nearly 50 members at Showground today. The ride to Darley was popular with a variation of the route to cycle to Beckwithshaw via Brackenthwaite Lane. We met Caroline, Sue and Jill along the way, lost Kevin and James to repair a puncture who then rescued Sue and sorted her puncture enough to get her to Sophie’s. All the groups arrived and left Sophie’s with space to accommodate us all as Wheel Easy gathered to welcome in the New Year meeting up with old friends. The sunshine and views were a tonic and the accurate forecast of rain at 2 caught us out as we had lingered longer than usual at Sophie’s. Anyway I have now cycled more miles in 2 days than the whole of last January so that is a good sign. Thank you everyone for the company. 27 miles. Gia 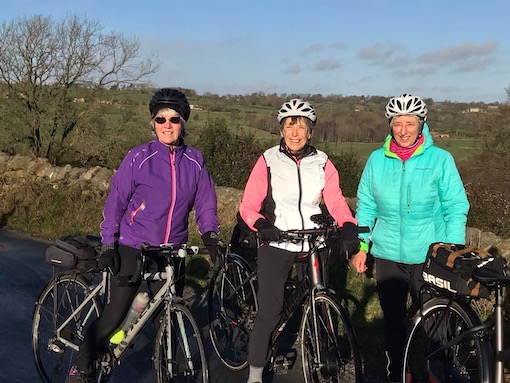 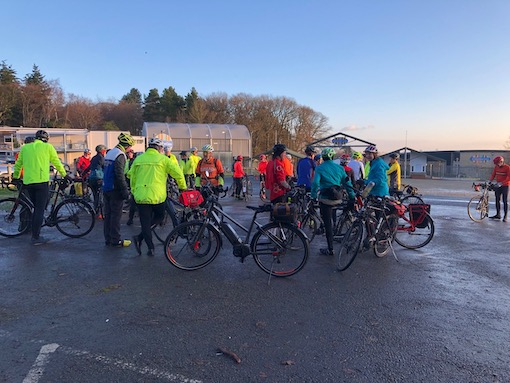 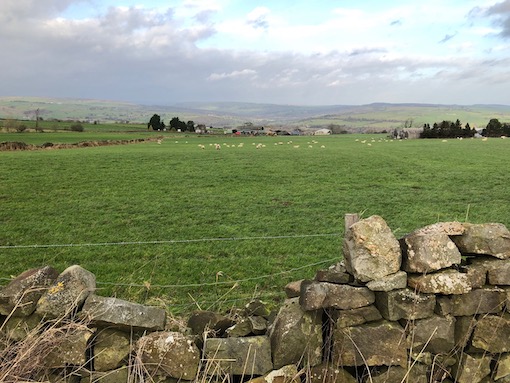 The inaugural official Medium Brisk ride got off to a great start, with five riders leaving the showground together in the unusual sunshine: Rachel, Steve, Andy, Mark, and Navah. There’s nothing like a long climb with a headwind to make a cyclist feel pathetic, and by the time we reached Norwood, we were ready to turn north and escape both. We lost Andy on the way, who decided to go a bit slower after a couple of months off his bike (and perhaps one too many mince pies). The road from Darley through Birstwith was simply wonderful riding, with the sun to the right and the river and scenery to the left and a tailwind and smooth tarmac. Our quartet was the first WE group to show up at Sophie’s in Hampswaite, but while we were ordering, the short ride started trickling in and the club quickly took over the entire back tent. After a somewhat extended cafe stop, the ride resumed, with a stop at the Knox Mill bridge for a photo (another stellar selfie by Navah), where we found a tandem propped against the fence and several loud but friendly dogs. Navah almost got left behind playing with the dogs, but caught up with the other three for the last few miles back to Harrogate. It was a lovely morning for a winter ride, and we got back before the rain started! -Navah L. 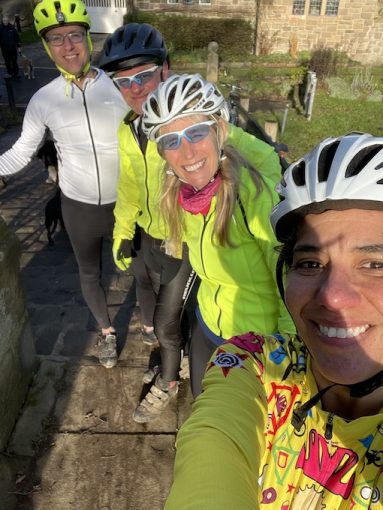 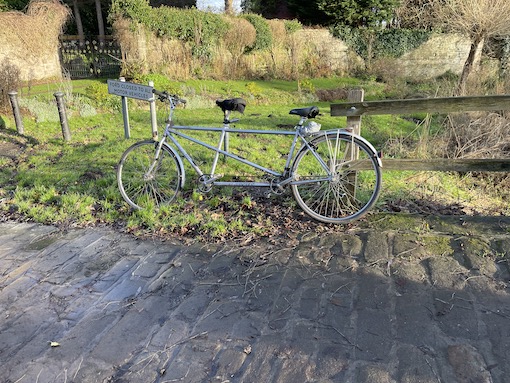 Good to see so many people out for the 1st ride of the year. We lost Mark O early on due to mechanical problems ……. and as the sun came out we lost ourselves several times with a number of missed turns due to too much chatting. We did eventually get to Thorpe Arch to find it all locked up so onwards to Wetherby & the Shambles. Julie & Mark T went straight back leaving David, Janet, Fred, Zoë, Katharine, Andy & Tall Tim to sit outside for tea & cake. Back via the usual route and home before the rain set in. 40 miles in all. Tall Tim 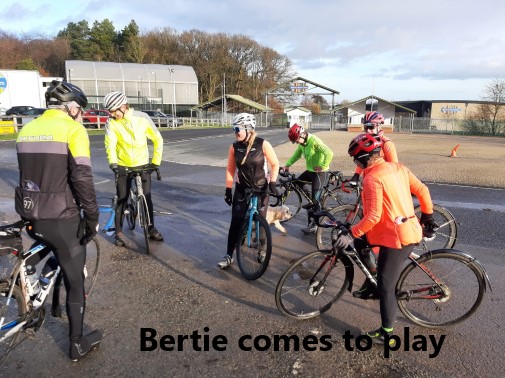 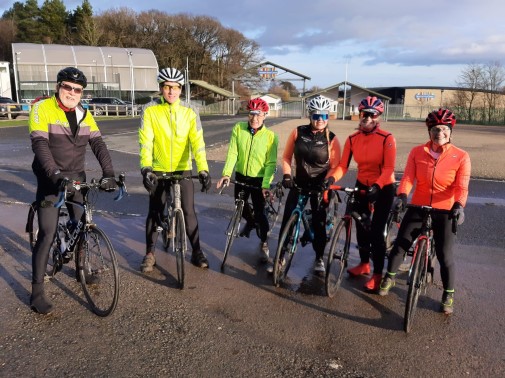 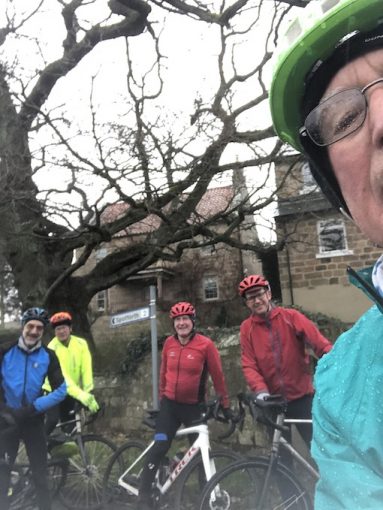 Ten starters today for a steady ride to Tadcaster, which didn’t go quite according to plan.  A promotion to the faster group and a tyre blow-out reduced us to eight within three miles.  One more left at Bramham for a shorter ride and another at Wighill for a longer ride, so by the time we reached the Plan C café stop at Wetherby we were down to six.  Fortunately, we were so late that the faster group vacated their tables just as we arrived.  Dennis then spoke too soon about his tubeless tires and we had regular stops to re-inflate them on the way home.  None of this detracted much from the ride, apart from not making it home before the rain came.  A gentle, if eventful, start to the year.   Karen

With a mild and bright day ahead, a group of 10 riders assembled for the first short ride of the year.  After meeting a few members en route, the group increased to 13, which might be a recent record for the short ride.  Our route of around 23 miles was via Norwood and Menwith to Hampsthwaite for coffee.  Sophie’s was full of WE riders, a few sporting new bikes.  We then split for different routes home, hopefully with everyone home before the rain started.  Whilst not exactly a Gentle route, it was a thoroughly enjoyable ride with good company.  Mike Walsh