A lovely 16 mile ride, 8 of which in perfect weather and 8 in a deluge. Ripley, Nidd, and an abandonment all completed in the esteemed company of El Butler ..what an honour……and how many smug points.  Thank you Dennis a very jolly morning. CG

Seven, including a couple of first-timers, set off from Hornbeam in very benign conditions but alas, we soon lost the sun as the skies clouded over and rain threatened.

We made very easy progress to Linton but then decided that as heavy rain was forecast, we’d cut out the loop up Jewett Lane and Bramham and headed directly for Wetherby. It had started raining by this point so we headed indoors for coffee and then returned in the rain via Little Ribston, Spofforth and the Showground.

A pleasant ride despite the weather. Good company as ever. 26 miles. Al D. 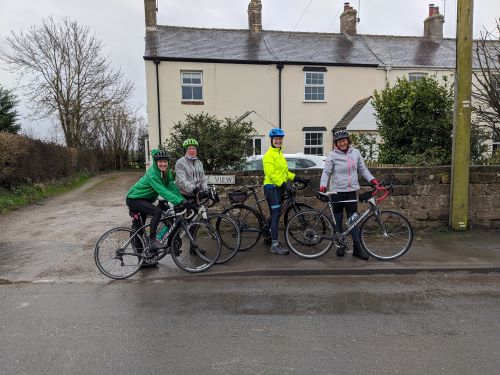 Shorter Medium+ Ride:  Two old hands, Paul and Martin decided to accompany two first timers, and in view of the weather opted for a ride to Ripon via Bishop Monkton, a good coffee stop at Olivers Pantry, and then a return via Studley Park in the rain that was heavy at times.  The newcomers were Christine and Debbie who are actually accomplished runners from Nidd Valley Road Runners, and they had no problem keeping up the pace, in fact it was the Wheel Easy members who was struggling to stay with them!  No doubt they will be back and will probably take on tougher challenges. Martin W.   PS it rained enough for Paul to seek out a cover for his saddle – see photo.  MartinW 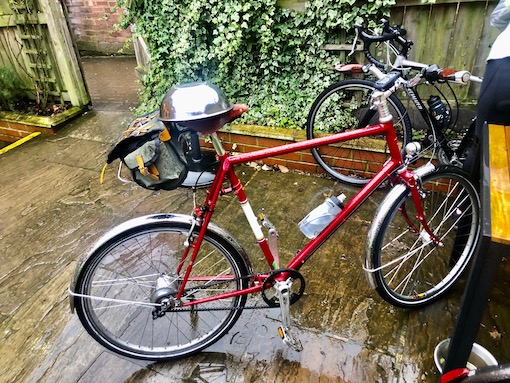 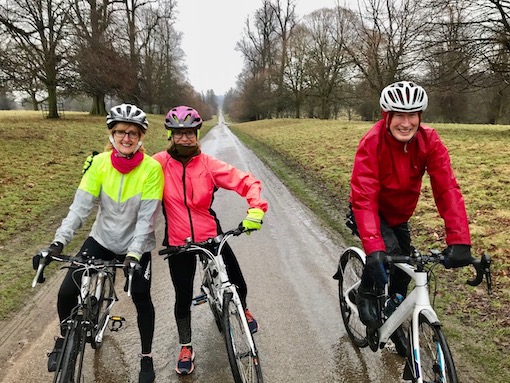 An interesting ride. We more or less followed route 137 but with variations.

Despite the threat of heavy rain at lunchtime, a lot of riders set off on the Medium Plus ride from Hornbeam on a grey but dry day. Having enjoyed an equally forbidding ride a couple of months ago, I was quite looking forward to this ride. There were 10 of us in my group.

We followed the usual route along Abbey Road to the Boroughbridge Road. We then took a sneaky turn to Old Scriven and on to Lingerfield and Farnham – a much quieter route than the planned route. Then to Occaney and Bishop Monkton where it started raining and we took this photo – with the snowdrops. Riders were given the option to peel off to Markington and back via the Greenway. They all wanted to continue in the rain.

We continued through Littlethorpe to Ripon where 4 people left us for the delights of eggs benedict at Olivers Panty. Then a delightful route through Winksley to High Grantley and to Risplith for a welcome lunch stop.

After that we abandoned the planned route and came back via Fountains Abbey and the Greenway – so much better than going through Knox.

40.5 miles with moderate hills. Thanks to everyone who stayed the course. We all came back wet but smiling.        Steve W 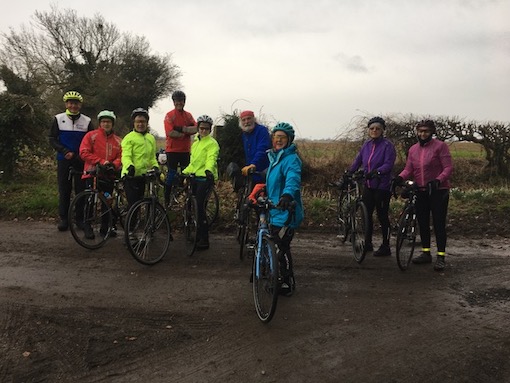