Our group of eight made steady, if uneventful, progress to Littlethorpe in pleasant autumnal conditions. Following a mandatory photo stop, Paul, Martin and Dave P left at this point to head towards Ripon while the remaining five of us headed to the generally little-used road to Copt Hewick, en route to Marton-le-Moor. Then, as we arrived in Kirby Hill, we were faced with a procession of 100+ motorcyclists, heading to Boroughbridge, some in full Santa Claus gear and many waving to us in friendly regal fashion. This may have had something to do with the police rider accompanying them!
In Boroughbridge Lister’s Farm Shop was full but we were well accommodated in the Plenty Cafe in a room that I have never noticed before at the rear of the establishment.
Our luck with the weather changed on our return to Harrogate as we first noticed the wet roads and deep puddles around Staveley and eventually we caught up with light rain around Farnham. Colin and James (thanks for back marking James) left us in Knaresborough leaving just Alison, Charlie and myself to head to Harrogate, where we arrived just before the deluge started.
A good autumn day out and an ideal route for such a day! Keith T 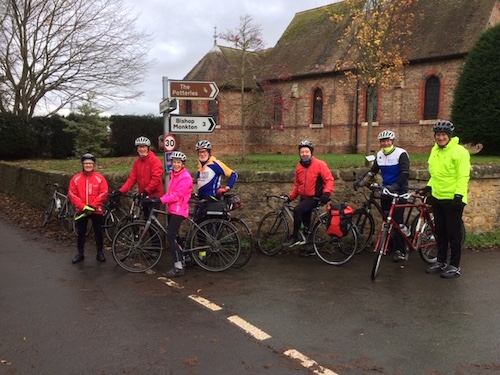 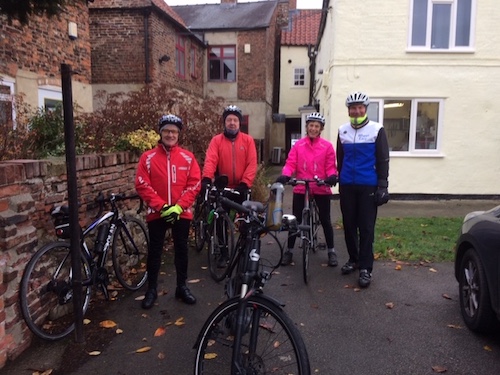 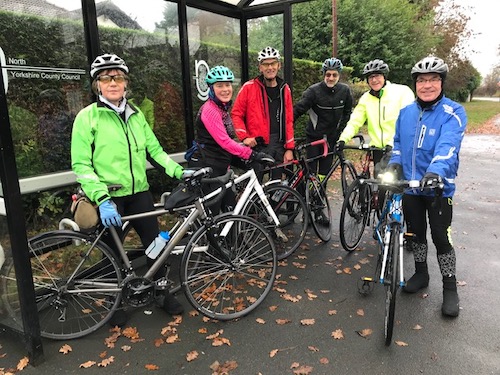 The weatherman had been using words like “east” and “Siberia”, so I was dressed in a sort of “mille feuille” of merino wool and, therefore impervious to any weather conditions. I would even be fine with those penguins in Antarctica.
There was a large gathering for the Medium Plus ride and I took the first cohort of eleven. This, curiously, included three Fast Boys (Alan, Andy and Declan), who tried to protest their innocence by claiming to be neither fast, nor boys. You can’t fool me! They were slightly restless and kept instigating intermediate sprints and, when we finally caught up with them, they were eating biscuits! Nevertheless, we all stuck happily together to Ripley, through Markington, then to Bishop Monkton and Littlethorpe. Shortly afterwards we slipped in to the Bermuda Triangle that I call Copt Hewick and followed a delightful little road I have never been on before, executing a couple of right turns and a left to Marton-le-Moor. Not everyone made the right turn to Kirby Hill but we all did end up in Boroughbridge. Listers was ram-jam full, so we spread ourselves between Gilchrist’s and Plenty and enjoyed an excellent lunch break.
We then put the Fast Boys out of their misery (no, we didn’t shoot them!) and let them sprint off home, with a cheery, “we’ll give you a five minute headstart”. Never saw them again. The rest of us took the Minskip, Staveley, Knaresborough route home as the drizzle started and progressed to actual rain. However, we were all warm and comfortable and had enjoyed the workout. I only remembered to take a picture at the top of Knaresborough Hill, so apologies for the missing faces!
Not a bad day for the end of November and thanks to all for the cheerful company. Particular thanks to Chris R for quietly and unobtrusively keeping a grip on the back of the peloton without being asked! As you know, Chris is taking over from Justin as Ride Rota Organiser and he is clearly being trained by the Justin Keen School of Excellent Back Marking. I think the grand total was 38 miles. Helen T

The weather man said possible 35% chance showers!!! Nine left Hornbeam in the overcast but dry conditions met up with the long group on Green Lane we were all heading towards Little Armscliff, thats when the 35% chance of showers no rain started and did not stop!!
We headed down past Swinstey over dam head and first climb up to Timble bit grim in the wet then we staid on the main road up over Askwith Moor even wetter and grimer! Then down to Askwith along the river to Ilkley at our usual blast thinning out the group on to a well-deserved stop at La Stazioe for coffee tea and food. A chance to warm up and dry off most of us regretting that extra layer of clothing or winter gloves.
Discusion about return route, Julie thought we were joking about Cow and Calf return, but this was the preferred route with the group. So off we trudged in the 35% chance of rain up the Cow and Calf then left down Moor Lane to return into Otley there we said goodbye to Mark as he said it would be quicker for him to get home via Norwood Edge we all wished him good luck with that. Return was via Castley, Weeton, Kirby Overblow; at this point the 35% rain stopped and nearly brightened up. Last hill of the day was Showground where we said goodbye to Tony at Fodders so seven left with our favourite last slog up to squash club. Approx 45 miles Did I say it was wet! Grant D 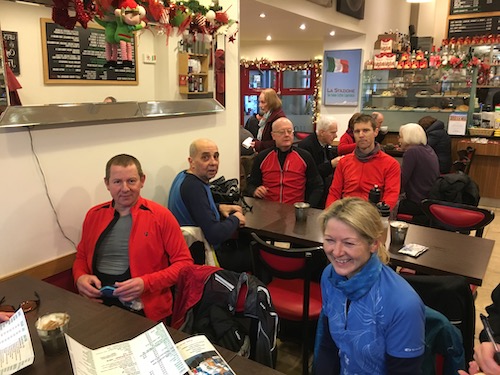 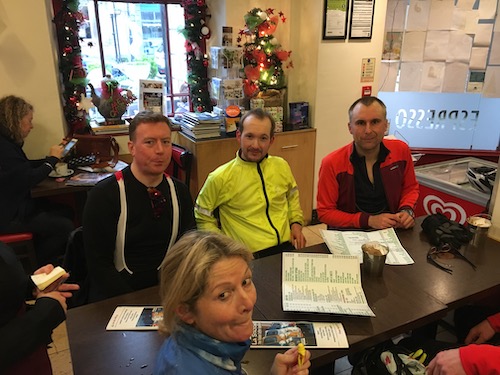 Five riders left Hornbeam for the long ride today to be Joined by a further three en route. A pretty good turnout on a cold day with a dodgy forecast.
Progress was good out via Beckwithshaw and Fewston. Even the climb up past Low Snowden was not to bad with a slight tail wind. By then the drizzle had turned to rain – cold rain. It was not a shower as forecast but continuous, but it did not dampen the spirits of the long riders.
There had been numerous reports of a road closure at Bolton Abbey preventing access even walking with a bike! It turned out this was “fake news” and we were able to stop at Bolton Abbey to try to warm up. We then proceeded to Barden tower where Peter R decided he was cold and wet enough to return to Ilkley.
The remainder set off for Stump Cross. As we climbed it got colder and colder. 1.8C at the top. Andy’s way of keeping warm was to race on ahead and get in an extra stop at Stump Cross. The remaining riders decided on a slower pace up the climbs and plodded onto Harrogate.
As we reached our destination we could see there had been a very heavy storm. Meanwhile we could see sun shining on the North York Moors !
All in all a challenging ride of just 50 miles, 900 metres of climbing some good discussion and a bit of rain. Martin D 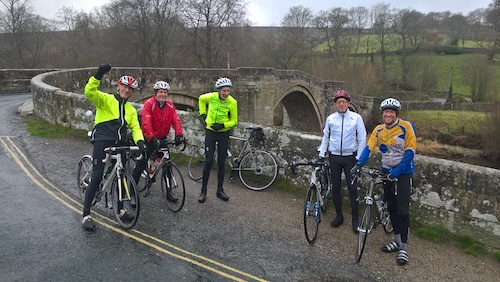