On another fabulous spring morning and eleven riders plumbed for the medium ride including some very welcome new faces. Splitting into two groups I joined the back marker group of five as we headed for Knaresborough and Farnham.

We caught the first group in Bishop Monkton and was able to ‘put them right’ for the turn to Littlethorpe. The two groups had already decided on Spa gardens for our rest which was duly met. I wasn’t looking forward to the long drag up through the Deer Park and Fountains but we all coped pretty well.

Down through Fountains and we headed for Watergate Road. That step bit round the bend proved too much for three of us. Once remounted we decided to head for Scarrah Bank Ripley and the Greenway all going our own ways at Bilton Lane. Mission accomplished. Great ride and great company. Thank you. 34 miles for me. Colin B

Only three for Route 211 to Coxwold today (Steve, Mike W & Tall Tim) before we picked up Mike P at Low Bridge and cruised our way to Easingwold. Initial disappointment at not stopping there was erased by the fabulous scones & service in the sunny garden at Coxwold (café stop no. 45). The weather was better than forecast but the keen wind meant zips were pulled tight on the route home via Sessay. Only one set of temporary traffic lights in 54 miles – remarkable. Tim L 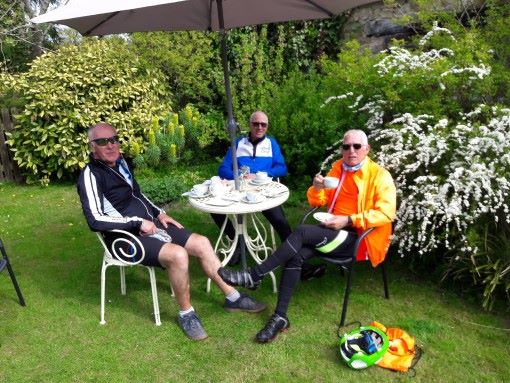 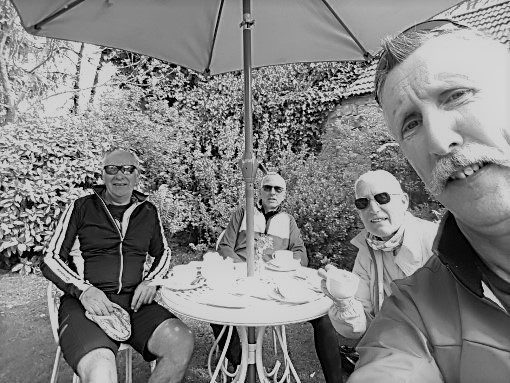 Only four turned up to do the Long Ride, despite the good weather conditions and a relatively flat ride.  We set off via the usual route to Wetherby, but avoided the main road by going via North Deighton.  On reaching the outskirts of Wetherby Richard L. took us on a loop around Wetherby until we picked up the cycle path to Branham.  After going through Stutton we decided to take the scenic route through Grimston estate and Kirkby Wharfe. Then it was off to Cawood with John H. setting a veritable speedy pace dragging the rest of the peloton behind him. At Cawood Richard L took over and set a more sedate pace. Now it was time to find some refreshments, first we tried the York Marina but that seemed too busy, so it was on to Little Acorns at Copmanthorpe.  Unfortunately, Little Acorns is closed on Sunday’s.  After some debate three riders Richard L., John H. and Dave W. set off for Askham Richard Tea Rooms and home.  PCJ decided to get some refreshments at Askham Bar Tesco’s and continue on the route as per the ride calendar.   PCJ