Paul Blackham who arrived on Electric Kevin this morning kindly suggested that he would lead the short ride. I had a plan…but it did not involve too much cycling….more coffeeing and caking in the comfort of Sue D s sitting room….an offer open to any short rider.

So four of us followed a meandering route to Sue’s Snack Shack.  Round the houses and Stray and snickets to Cardale Park, up to the top of Harlow Hill, along a pointless bike path to Lady Lane and straight along the ridge to Burnbridge …pleasant even on a dank day. After a pleasant hour or two at the Snack Shack we returned home having done a little bit of exercise.

Paul on Electric Kev must have done quite a few more miles with his very select group of gentlemen  David S and Peter B.as they did a sort of figure of eight round Kirby Overblow twice….refusing offers of the Snack Shack. Caroline G 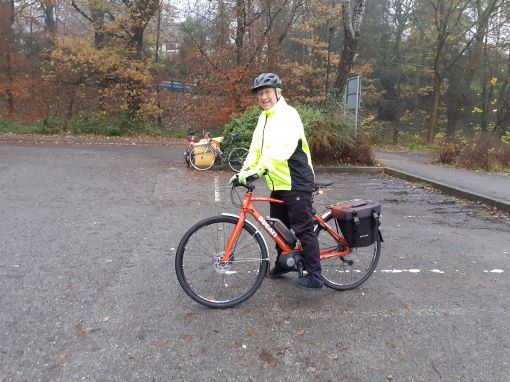 A murky, misty morning produced seven takers for the medium ride. This was an old route which took us through town to Bilton, over Knox Bridge, over the A61 without too much trauma and on to Hampsthwaite. Then the hilly bit began, past Birstwith Hall where Sur John took on the role of photographer – thank you John – before he headed back to Harrogate.

The group continued to Kettlesing, past Menwith Hill, along the bridle path and up to the A59. Fortunately the A59 was fairly quiet and we all reached the Fewston Farm shop safely and ready for hot drinks, food and a chat. We were joined there by Mike the vet and Anna. They had cycled over from Ilkley with a bit of electrical assistance.

Our return was via Cobby Syke to the B6451, up to Little Almscliffe and down to Beckwithshaw and homeward. I did see a bit of blue sky on the way back though apparently it wasn’t enough to qualify for a sailor’s trousers. The ride was only 24miles but enough on a day like this. Thanks to Sue C for back marking and everyone for their company. Liz P 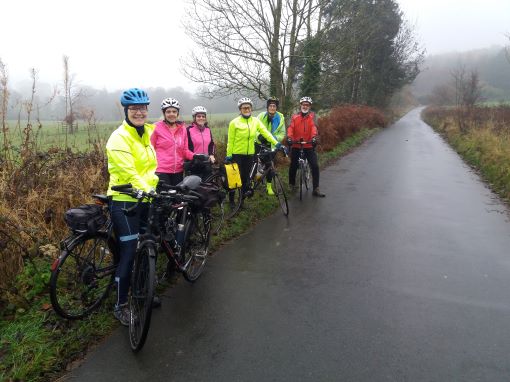 A slightly gloomy day but with no rain and no wind it made a pleasant change from complaining about the white hot heat of summer. Keith gave us the motivational chat at the start and, after dispensing with the Fast Boys and Girls, we split into two groups of about eight and set off briskly to reconvene at Ripley.

The Greenway was well carpeted with leaves but they caused us no distress and we were soon beating a hasty retreat from Ripley, where there was some kind of Christmas Market going on and the car park and surrounding fields were filling up alarmingly with a stream of cars. The brisk pace continued through Markington and Littlethorpe before turning off towards Copt Hewick. Strange to tell but Colin let it slip that he had never ridden along this road before and pronounced it a delight. It was then a short hop to Boroughbridge via Marton le Moor with a short pause to check out Lister’s Farm Shop, which couldn’t accommodate us, and a further longer pause whilst hundreds and hundreds of motorcyclists rode by. Many of them were being ridden by Santa Clauses, Elves, Reindeers and one Christmas Tree. Obviously this was some sort of charity event and we did wonder how the cafes of Boroughbridge would cope with them! Fortunately they vanished without trace and Helen’s group made their way into the Plenty Cafe. We had a long break here, mainly due to the disastrously slow service. The food was nice but they really need to get the Work Study Department in to improve productivity. By this point in the ride Helen had gained both Charlie and Peter B somewhere along the way. Keith’s group decamped to Morrison’s because they could see no prospect of getting anything to eat before dark. We had plenty of time for a nice chat and covered the usual eclectic range of subjects, including the unfortunate Prince Andrew and concluded that he would be getting fewer Christmas cards this year.

The second half of the ride was a lot shorter than the first and marginally brighter. After Minskip and Staveley, Helen’s group returned via the Farnham/Lingerfield loop and Keith’s group stuck to the original plan – neither managing to avoid Knaresborough Hill. Thank you to everybody for brightening up a gloomy day with your cheerful company – well worth turning out. Approximately 38 miles. Helen & Keith T 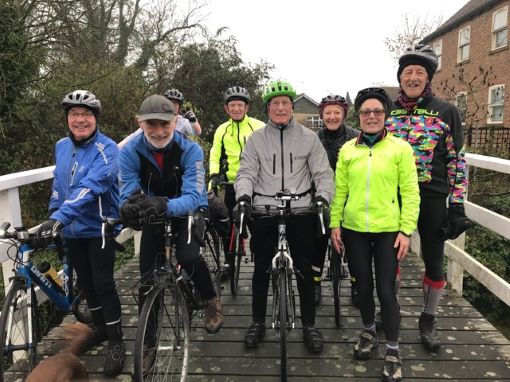 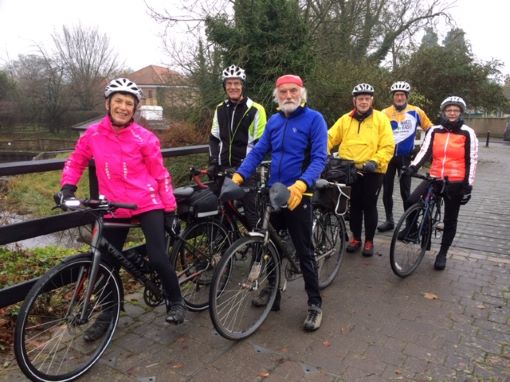 A larger faster group set off from Hornbeam before a coterie of seven (David, Helen, Vince, Tim No.1, Julie, Janet & Tall Tim) formed after Scarah Bank. The prescribed route was followed round in decent November weather and surprisingly little water on the roads. A short detour was added around Norton- Le-Clay (to see where Julie’s friend lives) before waltzing into a busy Listers at Boroughbridge for refreshments. Panic set in at the announcement that there were no tea cakes available before we were calmed by the offer of scones. David left us to attend a meeting at Fountains and the remaining six steamed up Knaresborough Hill to complete 42 miles in all. Tall Tim 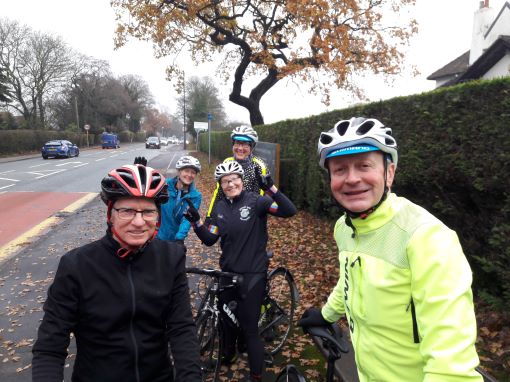 A damp grey morning welcomed us all to Hornbeam as the medium fast group set off. To use the phrase “fractured” might best describe the start.

We avoided the potential sketchy green way and went on the main road and up Scarah Bank, where we turned left onto Markington. By now the group had split into a more manageable number and this unusual way round Markington made a nice change.

Onwards towards Ripon and here the phrase “fractured” seemed appropriate as we pressed on via the A roads which eventually brought us out at the turning we should have found to Copt Hewick, oh well, we got there.

Onto Kirkby Hill, which isn’t a hill really and a quick blast to Boroughbridge. Here Grant and Fred left us  to return on prescribed route home and the remaining group went into Plenty for refuel. The consensus was mixed on quality of coffee, a very important issue.

As we had only done 25 miles, we decided to add a bit, so off we went via Aldborough, where Martin left us, to Little Ouseburn and Cattal. Filthy roads ensued with various agricultural spray hitting us frequently, and a bit lumpy on way back via Follifoot and the showground hill.

We added approx 15 miles onto the published route so something in the region of 50 miles and 2000ft which is OK for a flat ride and some good base winter miles for Paul, Mark C, Darcy, Mike, Martin, Fred and Grant. Mark T.

Four riders set off on a ‘follow your nose’ long ride with no more than a vague notion of heading to Tadcaster by an unspecified route.  John H evolved as ride guide largely by virtue of knowing the roads better than the rest, and also being the fittest.  By a circuitous route we reached the Lemon Tree for refuelling (beware the very slippery flag stones at the back).

Glyn, having already cycled from Leeds, left us to return home at the traffic lights where we turned right for Bolton Percy, Appleton Roebuck, Copmanthorpe and Askham Richard.  Here we tucked into more, probably unnecessary, food, especially considering the usual portion sizes at the Grange cafe.

The return was via Tockwith, North Deighton, Spofforth and Follifoot, where we went our separate  ways.Approx 54 miles, pretty flat, some fairly mucky roads, but no rain and almost no wind. Richard L

Well, we decided to do a long ride at about 8:32 and decided on a rough route (Tadcaster) at 8:40 – decisions, decisions! After half a mile I then decided that my saddle really had slipped about 1.5” back – It seemed to be solidly fixed so who knows why – and had to be sorted out. So, finally, at 8:55 we actually headed off to Wetherby.

Then on to Clifford, Windmill Hill where Richard could try his new 34 tooth sprocket, and into Tadcaster via the Selby Road. The Lemon Tree made us very welcome and, after saying goodbye to Glyn, we headed off via Bolton Percy to the Askam Richard garden centre cafe for another stop. Not needed really but the cake is very good!

It was then a steady ride back to Hornbeam via Tockwith. We did around 53 miles on a gloomy day which, however, for cycling was quite good.  John H