Only two riders today for the short ride, Janice and Me. We decided on Bishop Monkton via asda cycle track and the greenway to Bilton crossing and the Berryl Burton way to Knaresborough and onward via Farnham and Copgrove. After a short tour of the village we continued on to Markington and Ripley.Then home along the Greenway. 26 miles at a nice gentle pace enjoying the scenery and the spring flowers.D.B

This was the second short awayday ride of the year, but with only two riders, Mike and Fiona.

We enjoyed a route starting from Tadcaster and passing through Bolton Percy and Acaster Malbis, before a tasty and good value lunch at Askham Richard.  The good weather, albeit windy, held for our return to Tadcaster via Wighill. 23 miles in total.

Hopefully, more of the short ride group will be attracted to the short awaydays in due course.  Fiona.

Only three other takers for my medium steady on a bright but slightly chilly and slightly blustery spring morning. Chris, Chris, Steve and myself headed out for Knaresborough and had to ‘hold ourselves back’ as we were in danger of catching the medium plus riders as we progressed up the Wetherby Road/ Chain Lane/ Halfpenny Lane. Once they were clear good progress through Farnham and Bishop Monkton into Ripon.. Up through the Deer Park to Fountains visitor centre but arrived too late to have ‘breakfast’ sandwiches. Steve did manage to control himself. Just!!. It was fairly quiet when we arrived but was picking up as we departed.

We didn’t really get the benefit of a tail wind as we powered on up Waterbank and Bishop Thornton. Ripley carpark was very busy. Greenway not too bad. Good ride, good company. Thank you. 35 miles for me. Colin B. 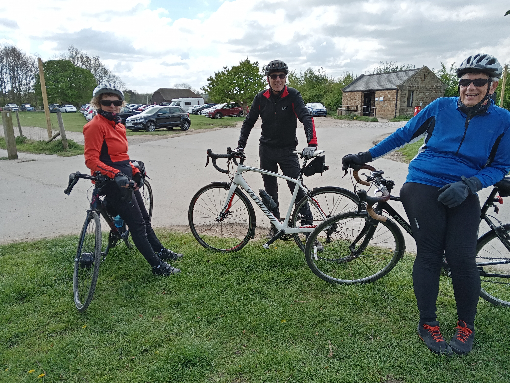 A fine spring day brought out a lot of keen Medium Plussers.  In fact, as we set off, more seemed to peel off and follow us so we agreed it was every man for himself until we reached the bridge at Knaresborough where we divided into two.  Slight chaos ensued and I was given a yellow card for going too fast which I shortly handed back to Keith for leading from the rear.  However, by the time we got to Aldwark Bridge, order was restored and everyone was playing nicely.  It was good to be heading into wind on the way out in the sure and certain hope that it would be behind us on the return leg.

This was a lovely easy group to lead.  Everyone knew the route so all I had to do was chat, eat, take a few incriminating photographs and write a scandalous report. Easingwold was bathed in sunshine so we were able to occupy two tables outside for a very relaxed, tasty early lunch.  Afterwards Keith had us all on a three line whip to visit St Michael’s Church in Coxwold to admire the rare horseshoe communion rail and octagonal spire. It contains the tombs of the Belasyse (Fauconberg) family.

We then began to enjoy the benefits of a following wind and made swift progress through Carlton Husthwaite, over the A19 and through the Sessays, where we stopped at St Cuthbert’s Church for a final group photograph.  Even swifter progress was made to Boroughbridge where we stopped to catch our breath before returning via the Minskip, Staveley, Farnham route home – although Peter J did turn off towards Roecliffe for a different return journey.

As you can see from the pictures, it was quite a saintly day out so, I regret, there are no incriminating photographs, nor scandal to report!  Better luck next time.  Helen & Keith T 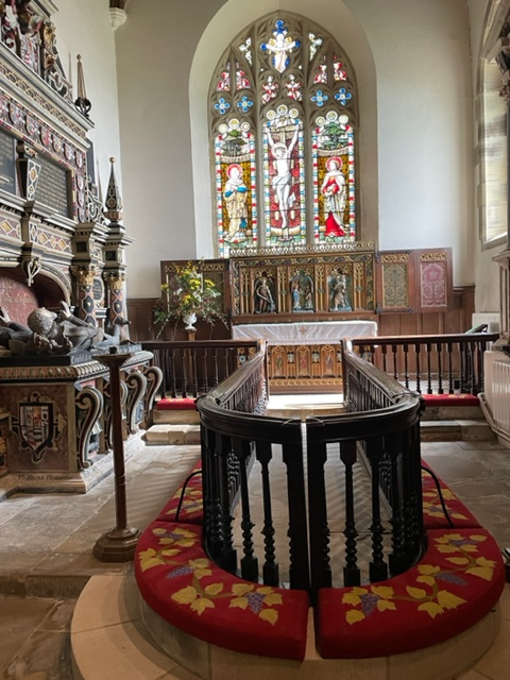 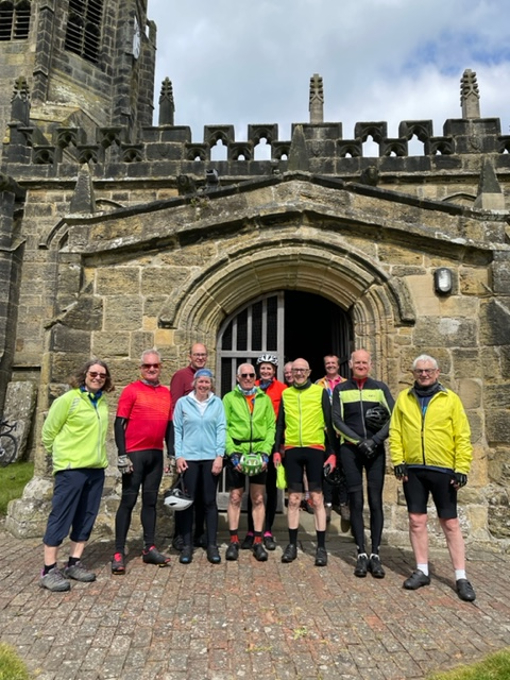 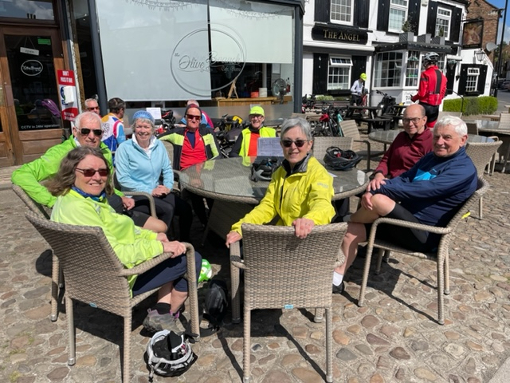 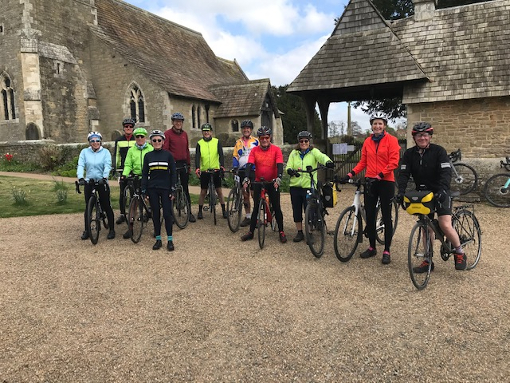 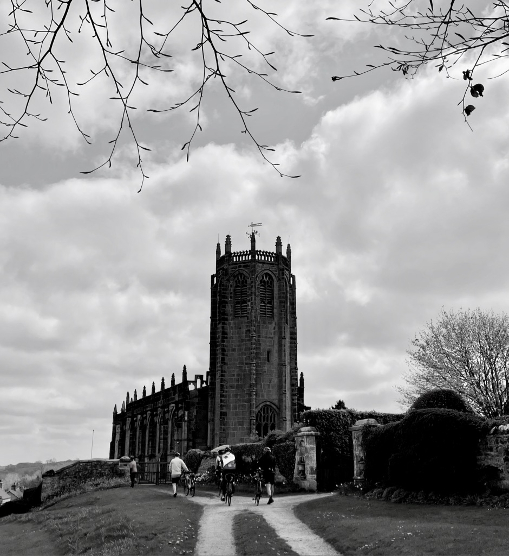 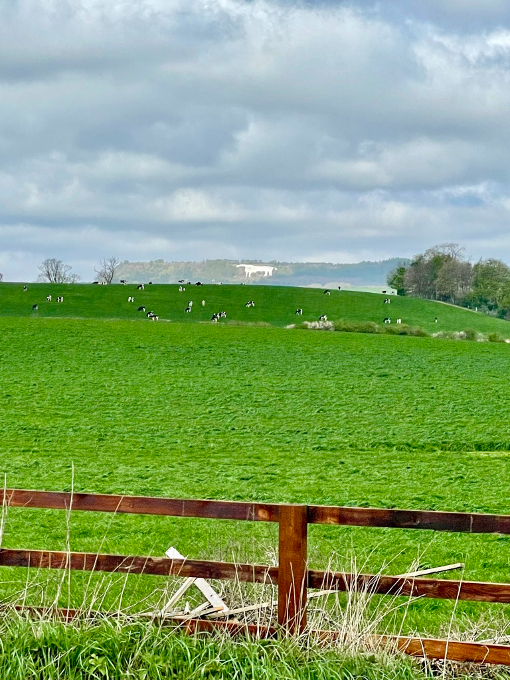 Five riders (Tim No.1, Mark, Andy, Richard & Tall Tim) went off first on Route 211 to Coxwold as a “fast” group. We cruised through many a mile of pleasant countryside into the North East wind before the “slow” group swept past us as if we were standing still on the outskirts of Easingwold; and that’s where we opted to take tea & cake – where we were soon to be joined by the Medium Plus Wheel Easy group. And then at the suggestion of Keith Tate we looked into the Saint Michael’s church in Coxwold as we passed.

Thereafter a nice tailwind propelled us past Hutton Sessay towards Boroughbridge at 20+ m.p.h. …….. only for the “slow” group to once more breeze past us a little after Thornton Bridge but an overall increased pace saw us all arrive at Milby largely together. The “fast” group took advantage of the slower pace leaving Boroughbridge to push on before the two groups once again all came together at the top of Knaresborough Hill. 52 miles & a maximum speed of 35 m.p.h. on the hills around Coxwold on a surprisingly sunny day. Tall Tim 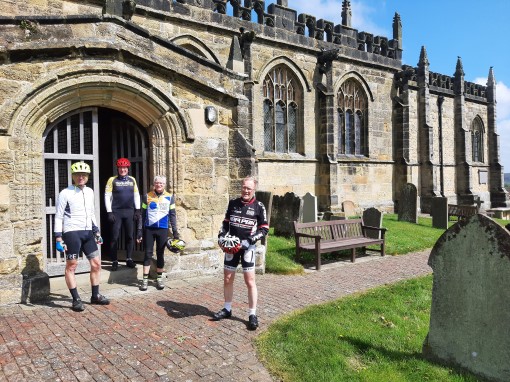