Nine takers at Hornbeam for the medium ride on this beautiful February day: small enough for one group. As we waited for the other groups to depart, we saw a number of Cappuccino riders going over the bridge overlooking Hornbeam towards Leadhall Lane. Their group discipline was exemplary, in tidy tight groups of five or six, with 100 metres between groups. An example to WheelEasy! perhaps?…

We set off towards Ripley and the Greenway. Tall John had crossed Dragon Bridge on the way to Hornbeam, and warned us of broken glass. Marion (Marian?) set the very civilised pace, having warned us at Hornbeam that she was out of practice. At Ripley Colin T appeared, but did not intend to join us for the rest of route. Hollybank Woods then Hampsthwaite and to Swincliffe Top, and into lovely lower Nidderdale on this lovely day. Tang and Kettlesing Bottom, and then the steady climb up to Menwith Hill Road and left to the Camp.

Alison N and Liz P both fancied a few more miles and a few more hills, and so left us to head towards Brimham Rocks. The rest of us headed south along the B6451 and crossed the busy A59. Tall John needed to get back, so he carried on and returned along Penny Pot Lane. We turned right down the beautifully-surfaced small road towards Fewston, and headed for Fewston Village Hall, which was open, rather than the Washburn Valley Visitors Centre. Refreshments were excellent, and the conversation good.

We avoided Brexit, and relied on Paul B to give us a word of the week, which was ‘gip’ or ‘gyp’ or ‘jip’, as in ‘my knee is giving me gip’. Geraldine used the technology to determine that it comes from ‘gee up’, as in horse riding. Not to be confused with ‘gippy tummy’, which comes from ‘Egypt’.

The route on the website mentioned Timble as a possible additional hill, but the unanimous decision was ‘b****cks to Timble’, as the route was quite hilly enough already, thank you. We climbed out of Fewston back up to the B6451, left then right and up to Little Almscliffe and down Norwood Lane (a rare direction for us) to Beckwithshaw and Otley Road, where Marion/Marian left us.  Paul B left us at the junction with the Squinting Cat, leaving just 4 of us to return home. About 28 quite hilly miles. Joe S 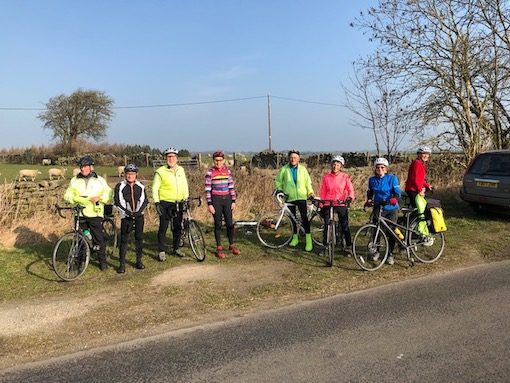 I really like this new concept of moving straight from Autumn to Spring. I don’t know why we have never done it before and I am sure it will catch on. This was reflected in the large number of eager cyclists assembled at Hornbeam and once the Fast Boys and the Fast Girls had dispersed Tim and I were left with 13. We decided to travel more or less as one group, with Tim taking charge of the front end and me taking charge of the back end, rather in the style of a pantomime horse.

There is not much you can say about a perfect day with uninterrupted blue skies, gentle breezes, warm sunshine and cheerful company and even my vague suggestion of doing the Langbar Loop met with polite disinterest! Therefore we headed out on the prescribed route, incorporating the Little Snowden diversion after Timble, to take my mind off the Langbar Loop. We met some Fast Boys and Girls on our way to Ilkley where we had an excellent lunch at the Stazione Cafe, sitting outside. This is such a friendly, efficient cafe but we did have some hills to climb, so off we went. I do like the Leathley, Stainburn, Almscliff Crag, North Rigton ride home but it always gets the prize for the hardest, hilliest return route on the calendar! Roll on summer. Helen T & Tim R (not to be confused with any of the other myriad of Tims). 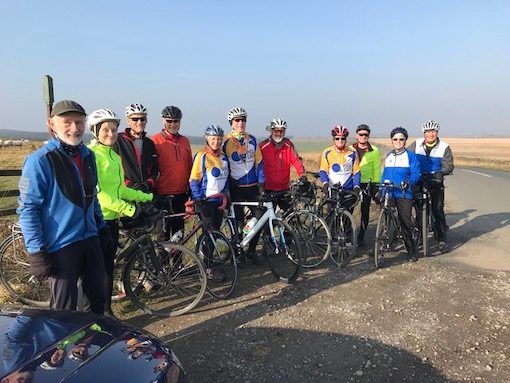 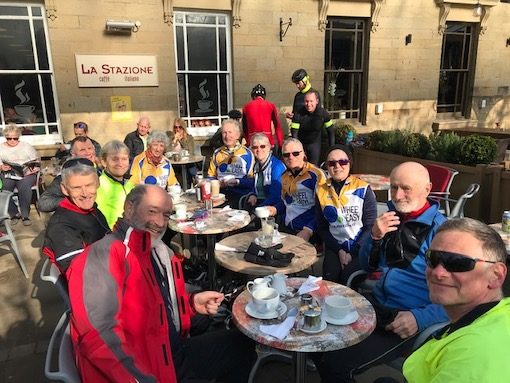 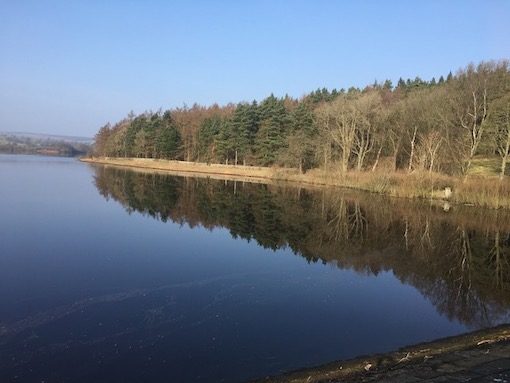 Perfect weather for cycling or what- a group of 13 set off towards Little Almscliffe with Helen B setting a bit of a pace. She did mention something about getting back in good time to do some gardening in the afternoon but at this rate we would get to the cafe before it opened! We picked up Julie along the way but somehow lost Glyn.

The views across the reservoirs at Swinsty and Fewston were gorgeous – so calm and the reflections in the water were stunning. Definitely worth the climb out of Fewston – still a naughty bit of a hill. Deciding against Low Snowdon we gathered for a group photo at the top – taken by a friendly cyclist. A breakaway group did the Ilkley loop whilst the majority headed straight for Cockpit Farm. Service was swift although we did eat them out of teacakes. Glyn caught us up but as he had riden into Harrogate he peeled off to go home. The breakaway group arrived just as we were leaving-making our way towards Otley and up Farnley Lane.

We said goodbye at Leathley to the Knaresborough boys as they made their way back through Castley etc. Still a few hills for the rest of us though – Stainburn, Almscliffe Cragg,North Rigton. We were rewarded with a lovely swoop down into Burnbridge. 32 miles at 12.7 mph average (not bad for a hilly ride) with over 3,000 feet of climbing. Great ride everyone-I loved it. Janet G 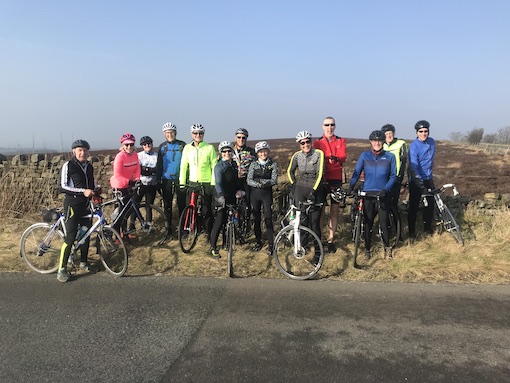 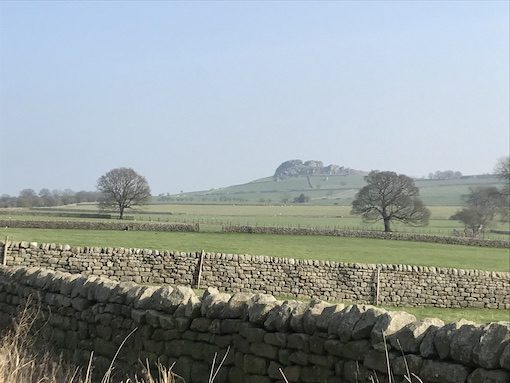