Hornbeam: Started off with Andy A followed by all the Medium Plus riders

Norwood Edge:  The “Not so fast” Medium Plus group caught up with us.  Medium Plus set off well ahead of my group.  Glyn left us to go home.

Clint Bank: Caught up with the “Not so fast” Medium Plus group.

Fountains:  Went for refreshments at the Visitor Centre, while the “Not so fast” group carried on to Ripon.  Met up with Malcolm. Continued on to Knaresborough via Littlethorpe and Bishop Monkton.

Farnham: Stopped for a drink and the Medium Plus Fast group and the “Not so fast” Medium Plus group appeared over the horizon.  After some friendly badinage they all set off for Knaresborough.  PCJ 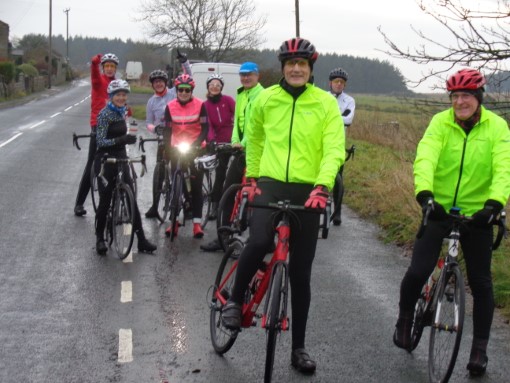 It was cool, grey and damp conditions this morning as the weather hadn’t yet decided what to do. A good turnout for the last ride before Christmas and we soon broke into our selected rides. Only 3 of us in our group – Chris R Mike W and myself.  as we departed Hornbeam being rapidly passed by the faster larger body of riders. Out to Lundhouse Green, Beckwithshaw and Little Alms Cliff. Sky looked a bit ‘iffy’ as we turned towards Menwith Hill and Birstwith but thankfully that’s all it did. We were caught by Glynn as we climbed out of Shaw Mills and he accompanied us to Fountains for our coffee stop but he departed for home as he was under instructions. The larger WE group arrived as we departed. On to Ripon via the Deer Park and across to Littlethorpe where we caught up with a couple of EG’s. So, five of rode through Bishop Monkton and across to Sandy Bank and Knaresborough. The EG’s departed and I said my fond farewells as we got to Waterside. Sky had brightened. 41 miles and enough calories burnt off for the extra roast potato in a couple of days. Thanks to Chris and Mike.

I would like to thank the WE admin team, the route planners and leaders for the smooth running of things during 2019 and all those riders who have accompanied me throughout the year, making my Sunday and Wednesday excursions so pleasurable. Have a great festive season and I look forward to riding with you through 2020. Colin B 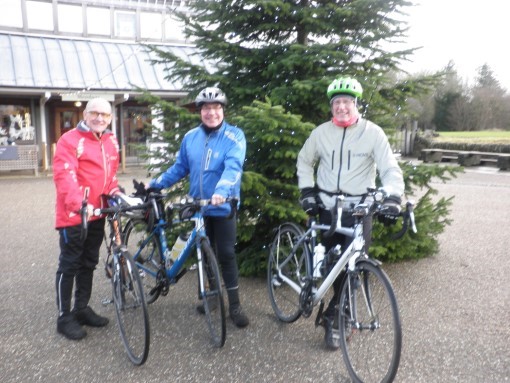 Yet Another Medium Plus Ride

The vast majority of riders today were for the Medium Plus and so several groups formed and last away included Gia, Paul T, Sue C, Monica, Debbie, Charlie and myself. It was a cold start but a gradual improvement even brought some sunshine later and at least it was dry, although the roads were damp and dirty entailing more bike cleaning at the end of the day! The prescribed route was on familiar territory although in parts followed a different direction to normal, but progressing via Little Almscliffe, Menwith, Birstwith and Markington we landed at Fountains to meet with Malcolm for a welcome food and drink break. Paul then headed home on the direct route to make his deadline for Sophie’s Christmas lunch (hope it was good) and Sue opted to join him for the return, but not the lunch. The rest of us headed home through Ripon and Bishop Monkton in nice sunshine and deposited me on the way through Knaresborough. After the recent poor conditions today it was nice to be out and thanks to all for your company. The mileage at about 43 miles was not far from that advertised distance and the photo is courtesy of Gia at Cut Throat Lane.  James G 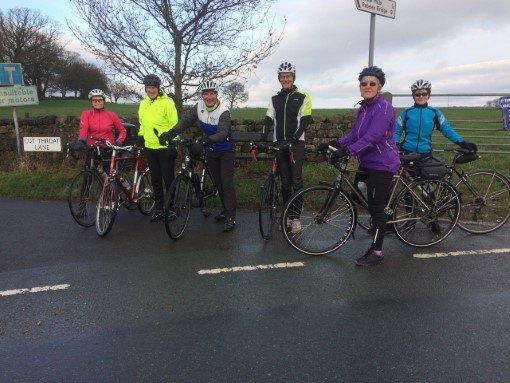 A good day for cycling. Plenty of riders arrived at Hornbeam but only 4 of us needed to do the Medium Ride. It was billed as 30 miles but my Garmin says 31.7 miles. We all needed to get back for Christmas shopping or packing so a shorter ride was the perfect option. We followed the usual route to Fountains and met Richard P on the way. John and Paul left us before we got to Fountains. Only 3 of us now. The cafe was remarkably quiet for 3 days before Christmas.

Down in the deer park, there were no deer – they were probably all out helping Santa.  On to Littlethorpe and Bishop Monkton where Richard left us. Just me and Liz P still cycling. Then to Occaney and back up Knaresborough hill and Kingsley Drive. A lovely ride.  Have a lovely Christmas everyone.  Steve W

Taking bikes on trains from Harrogate has always been problematic.  Northern Rail have no reservation system for bikes, and only allow bikes at the discretion of the guard. This has allowed guards to refuse cyclist with bikes on their trains in rush hour. – which has happened to me!  Quite a problem if this results in you missing your reservation on a train from York to Edinburgh, for example.  LNER had 4 bike spaces on their trains which could be reserved, but there was only one LNER train per day from Harrogate.  So, Harrogate cyclists have had a tough time taking bikes on trains, and some cyclists therefore prefer to start their train journeys at York or Leeds, and either cycle or drive there.

The new LNER winter timetable started on Sunday 15 December, and is the biggest improvement in Harrogate rail travel for decades.  It sees the introduction of 6 return services per day (including Sundays) from Harrogate to Kings Cross, and all these services use the new Azuma trains.  LNER’s literature says each Azuma train “comes equipped with special compartments for cycles….Please note that all cycles must have a reservation (and tandems need two) – spaces are limited so be sure to book in advance to avoid any disappointment……owners with standard bikes will be advised where best to board the train (not just the end coaches as on our other trains).  Our station team will be on hand to assist.”  It sounds wonderfully revolutionary for cyclists too!  So, on Monday 16 December, Peter Bradley and I put the first Azuma train to the test: we booked single tickets and cycle reservations on the 7.34am LNER Azuma train from Harrogate as far as Doncaster.

Unlike previous cycle reservations which came in the form of a ticket which had to be attached to your bike frame, with the Azumas, the reservations are printed on an A4 sheet, which tells us that our bike reservations are for K97 and K98, both: “No smoking. Seat Position: window”  I kid you not!  Have you ever seen a bike that smokes?  So, we got onto coach K with our bikes and looked for the bike racks, which we thought would look like this photo in the Azuma literature: 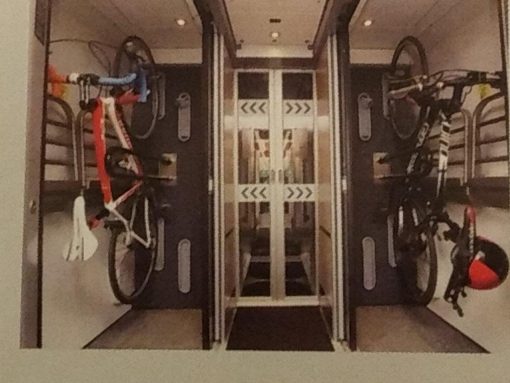 We passed through the doors of coach K and there were no bike racks to be seen; they must be at the other end of the coach.  We can’t get off to walk along the platform to the other door, as the rest of coach K, and coaches L and M, are all beyond the end of the platform.  So, we have to take our bikes through the coach.  The central aisle is not wide enough to allow a set of drop handlebars to pass between the seats, so the bikes have to be lifted above the seats, and we have to also take them through First Class accommodation, as coach K is both Standard and First Class. 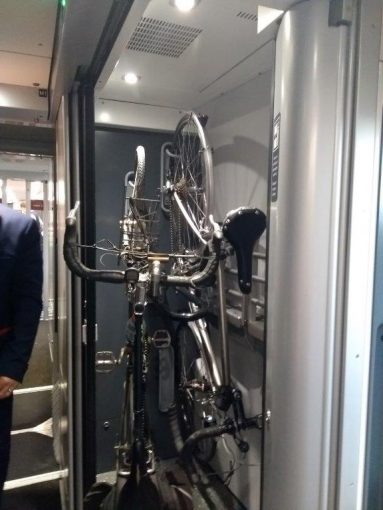 When we got to the other end of the coach, two stewards told us there are no bike spaces there either, but we could put our bikes into the luggage cupboard.  They then got a key and folded back the doors to reveal an area with tip-up shelves for cases, and 2 bike hooks on the end wall.  We struggled to get our bikes onto the hooks as the space is very restricted, and Peter’s bike handlebars are partly blocking the aisle and preventing the doors being closed.  Bikes with straight handlebars would be a much bigger problem, and it would be much worse if there had been another 2 bikes on the opposite side of the aisle.  These are serious design issues!

Talking to the stewards, it became apparent that each coach has locked compartments at each end, all with shelves and bike hooks inside, but on 9 coach trains, only 2 compartments at one end of Coach K have been designated for bikes.  So, there are probably at least 36 bike hooks on the train, but only 4 are used at present.

I pointed out to the stewards that we were not to know that the bike spaces were hidden inside locked compartments, and so why wasn’t the bike compartment unlocked before we got on?   The stewards said that it was the responsibility of the LNER platform staff to get bikes on board (i.e. not the on-board stewards), but there is a problem at Harrogate, which is a Northern Rail station, as Northern Rail platform staff are not allowed to enter LNER trains.  By now, we have been on the train for about 10 minutes, we have uncovered all sorts of major issues, and all of my optimism for a new dawn in rail transport for Harrogate cyclists has completely disappeared.

We then looked again at the first end of the coach, and discovered where our bikes should have been.  So for future reference, when you get on an Azuma train with your bike, this photo shows what to look for – yes, it does look remarkably like a toilet cubicle, but closer inspection shows a bike symbol, and the 2 red lights above the door indicate there are 2 cycle reservations from Harrogate to Doncaster on hooks K97 and K98. 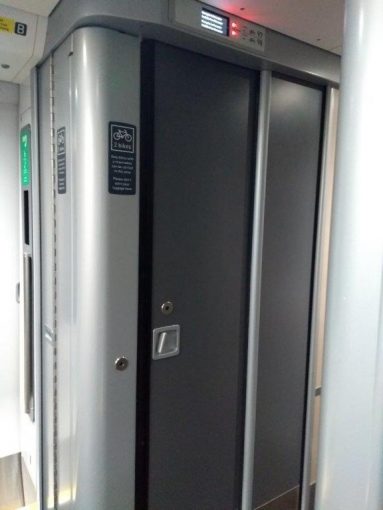 I will be letting LNER know of our bad experience, of their design failures, and of the lack of assistance for cyclists at non-LNER stations.  In the meantime, I hope this report will help cyclists to be better prepared when getting on at Harrogate station.  Make sure you get there 10 minutes before departure time, and look out for a ‘toilet cubicle’ with a cycle symbol, and a red reservation light above, and look for somebody with a key to unlock it!

So, what about the ride?  We had a wonderful 67 mile ride back from Doncaster on a cool (max 5 degrees) but beautifully sunny day with clear blue skies.  Certainly, it was the best cycling day in December.  We had left Doncaster at 10am after having a leisurely breakfast, we had lunch in Selby, and arrived home at 5.10pm.  A great ride in some unfamiliar territory, which was the centre of the devastating floods just a few weeks ago.       Eric