Variable numbers of people started and dropped off along the way but we eventually settled down into a group of seven, by Low Bridge in Knaresborough. We took the usual route to Farnham, Arkendale and Great Ouseburn. It was a beautiful, unseasonably warm day for a cycle ride and we could hear the songs of Yellowhammers and Corn Buntings as we cycled along.

We we pleasantly surprise to find Tancred Farmshop open – it being Easter Day when many places close – and I think everybody else thought it was shut too, as we had the place to ourselves.

After refreshments, we made good progress to Whixley and crossed the A59 without waiting, which must be a first. In general, the roads were very quiet throughout the ride. Down to Cattal and then Hunsingore, we picked up the cycle path at Walshford and reached Little ribston where the group split up. Some going to Spofforth and back to Harrogate while others headed off to Knaresborough. 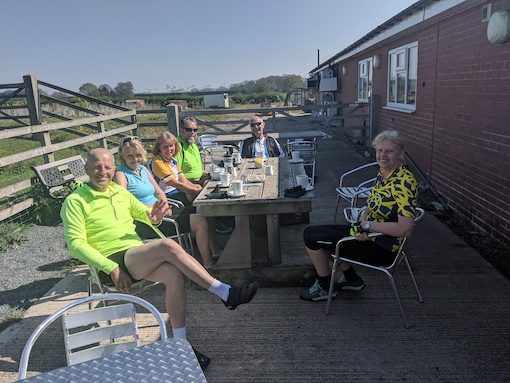 With 9 takers for the short ride but no leader… we formed a plan.
We had a routemistress and a volunteer to write. As for the leader, this was done on a de facto basis – whoever was at the front at any point was the leader!
Riddle of the day, what do you keep in your bidon? Well short riders, on Easter Sunday, have Easter nests and a well deserved treat they were before we swooped down to Bishop Monkton.
Photo taken at usual spot before the Occaney free wheel and then again at Markington crossroads so Graham could show off his Route 66 cycle jersey.
We think it was about 25 miles but this was based on an average of everyone’s computers! JJ 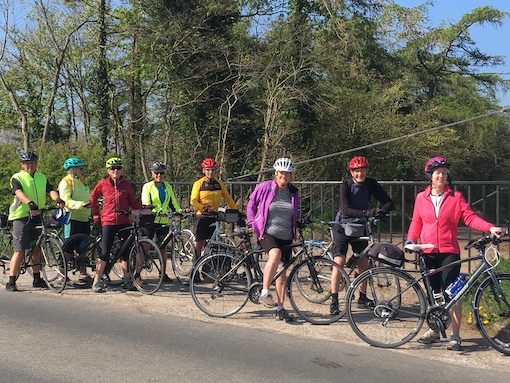 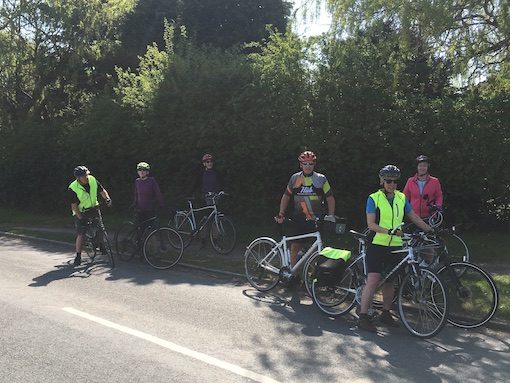 This was the first of the long rides for the summer months which carry the strap line: “The speed will be at a pace to suit all riders, in particular new group riders, and no one will be left behind!”. Would it work? Well, it was excellent to see some new faces in the bottom carpark at Hornbeam, and some returning long riders too.

Instead of going via Beckwithshaw and Pot Bank, I led the group of 12 through Rossett and Pannal Ash to experience the pristine smooth new surface of the Cornwall Road/Penny Pot Lane steep descent to the narrow bridge across Oak Beck – all ready for the Tour de Yorkshire and the World Championships.   As we went along Penny Pot Lane, we were joined by another rider, and at the far end of PPL we stopped for the full group photo, before splitting into a faster group of 6 and a slower group of 7.   When we arrived in Grassington for our coffee stop, we discovered a third, even faster, group of 3 were finishing their snacks, having omitted Hornbeam Park.

For years I have described cycling in Wharfedale as ‘cycling in heaven’, and today the angels were singing to us as well! This was just the most amazing ride: Wharfedale and Littondale were at the glorious best, and the weather was the hottest Easter Sunday on record. Blue skies and sunshine all day. Cycling shorts and short sleeve shirts! Could it ever be better? We didn’t think it possible! For most of the day we seemed to have it all to ourselves, but on the way back we found people picknicking, sunbathing and even cooling off in in the river at Conistone (never seen that before!), and then in their hundreds at Burnsall, and in their thousands at Bolton Abbey. But nothing could detract from a truly wonderful ride. I’ll let the photos speak for themselves.

Was the new ride format a success? The 6 of us in the slower group were all agreed: a great success.   True to strap line, our pace was suited to all our riders, and no one was left behind. We didn’t rush anything, including our refreshment stops at Cobblestones in Grassington, and Tea on the Green at Bolton Abbey. We hope more riders will join us on the designated long rides in future. It was 6.30 when I arrived home. 75 miles and Mr Garmin says we climbed 6,000′. In the new Wheel Easy cycle route classification, this route is in the ‘undulating’ category: Mmmm!     Eric 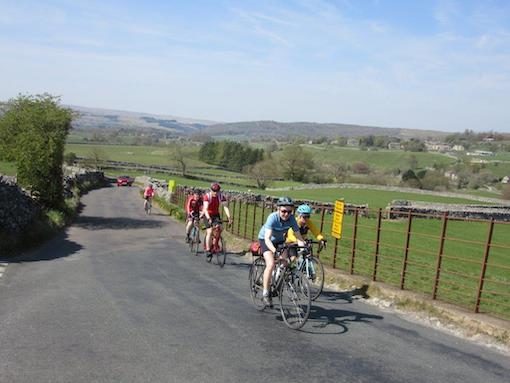 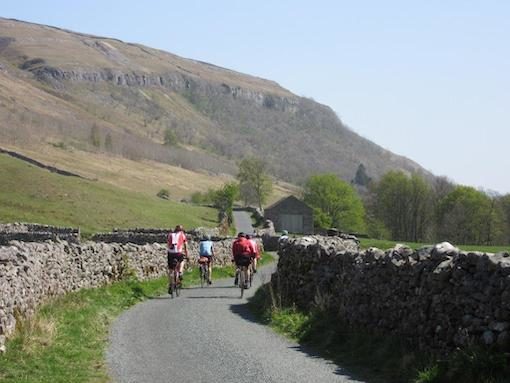 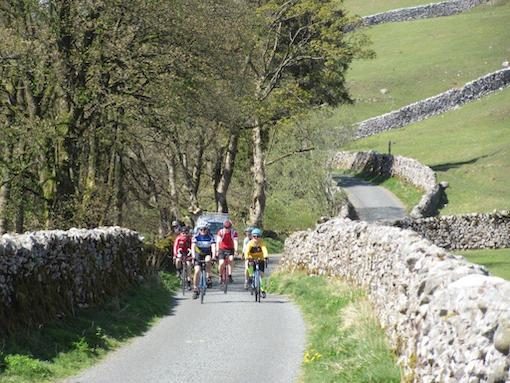 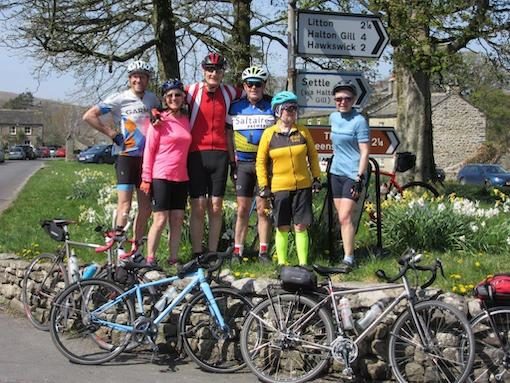 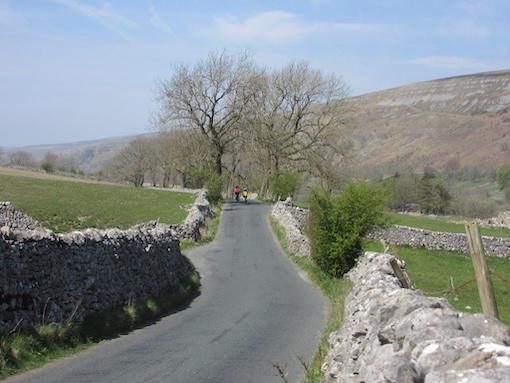 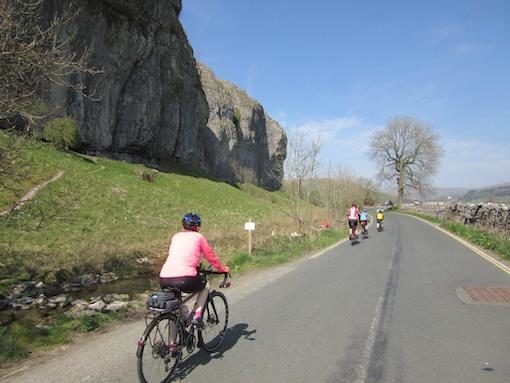 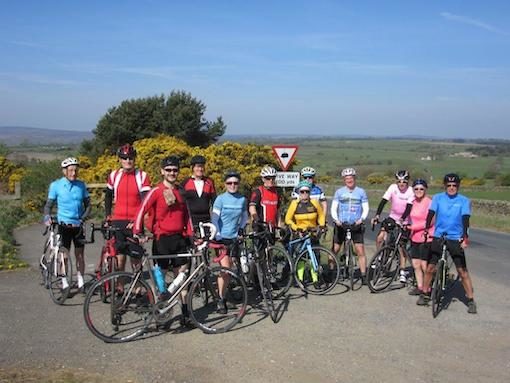 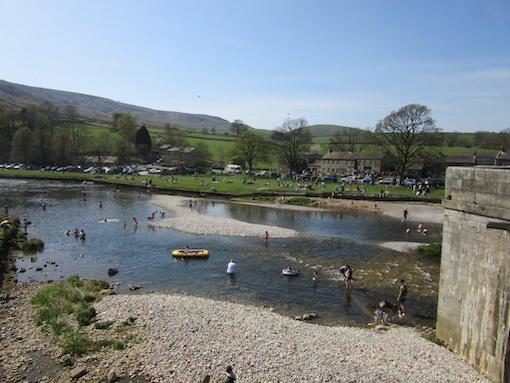 A small group of 4 riders set off at a brisk pace , relying on Julie’s memory of the route.  This was questioned in earnest by Dave  when it was disclosed that this involved an ascent of Norwood Edge , which he had never done before. However, the first bit was the worst bit, it was a long hill and hot weather , but we  made it .Steve and Katie made it all look very easy ! We stopped for more water at the Sun Inn then carried on for the rest of the route without a coffee brèak , arriving back in Harrogate well before 1. 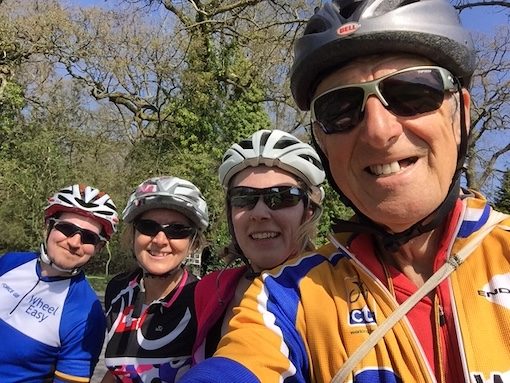 On a Sunny easter Sunday all summer biked fast riders led by Mike departed for the hills out towards Leadhall Lane and onwards into a sleepy Burnbridge eager to make the best of the day.
Out of Kirby Overblow away down the hill this time rather than the other way. upon reaching Dunkeswick extra care needed as the road had been resurfaced with skid inducing gravel top making progress a wee bit dicey in places and of course being slower and more careful we managed to miss Weeton Lane turn-off..never mind we continued up Wescoe Hill Ln and skirted round the back of Huby via Gravelly Hill and Merrybank Lane towards the looming crag obviously being a big draw for the fair weather climbers. Onwards downhill towards the village of Leathley via the aptly named narrow Dark Ln with its tall trees overshadowing tight bends. Turning right we headed uphill for a short time before heading left onto cinder path and down over the Washburn river bridge all I think aware of the looming climb of Norwood Edge reached by a fast decent passing Lindley reservoir leaving you at the valley bottom facing a near 2 mile climb, which with that crested it was decided that the church heritage cafe at Washburn was the place to be for coffee and cake and sarnies…(good call Mark)  and a quick church service if that took your fancy. After being greeted by several eager dog we all settled into some refuelling.
After that it was goodbye to 4 of the team, to use the words of a famous band called Genesis…then there were three! who set of for Menwith and Darley marvelling at the brilliant view of Nidderdale you get as you head downhill toward the Wellington hill Inn. So right it was and  back down the valley towards Ross Bridge and yes more climbing to reach the main road and Strip lane climbing…its a theme!!!  out to a sunny view of Brimham Rocks. Turning right away from the famous NT tourist magnet we heading towards home and Burnt Yates via the endless Brimham Rocks road. Passing down Bedlam Hill we arrived at Ripley I split for Scotton and paul and Darcy Harrogate.
A great days cycling and good company as usual.    tp

The Long Ride having arrived at the end of Penny Pot Lane split into two groups with Chris initially leading the faster group. With the assistance of a tailwind up Duck Street we made steady progress to reach Greenhow. The pace was a little too quick for Mike who opted out to go to a barbeque at Burnsall. When we arrived at Cobblestones, Grassington, we were met by a trio of Long Riders, namely, Peter R, Andy A and Martin D, who had over-estimated our rate of progress and had already finished their refreshments. After some jolly banter the Trio set off to continue their ride. Chris decided to take a very short break and he left us anticipating a quick return to Harrogate. When were just
about to leave Eric’s group arrived. After another round of jolly banter, we were off to sample the delights of Lovely Littondale. The return to Harrogate involved going via Cavendish Pavilion/Bolton Abbey which was swamped with people and cars. The queue from Cavendish Pavilion extended to the A59 and made cycling amongst the traffic a hazardous occupation. Three of the group decided to stop at Abbey Tea Rooms. Given the heat and the mileage that we had already covered myself and Colin P opted for the slightly shorter but hiller return via Askwith Bank leaving Richard L to complete the ride. PCJ 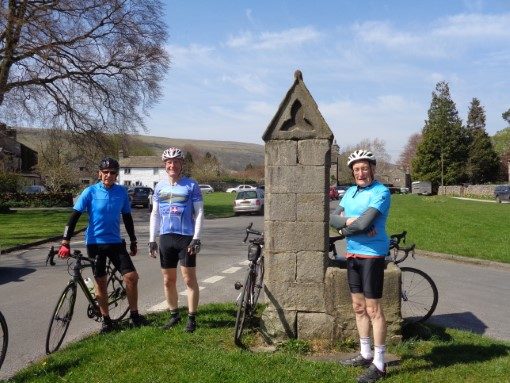 You all know that I love hills, especially going down them. This ride had loads of hills and thankfully the 8 riders who came along enjoyed them too. My Strava said it was 45 miles with 1034 metres of climbing.

You all know what a great day it was – sunny, warm and great views across Wharfedale and Nidderdale. It was the first showing of bare legs for many of us.

We made a few changes to the published route, mainly planned around lunch at Fewston Farm shop. First we went to Kirkby Overblow and sailed down to Dunkeswick. After Weeton we decided to take the flat way to Leathley because there were plenty of hills to come. The route up the gated road is always lovely. We avoided the lumpy bumpy bit through Stainburn Woods but that meant a climb up Norwood Edge. Then we left the route. Some of us took the fast downhill to Fewston reservoir with the climb out to the lunch stop. Others took the flatter way. Through the Listening Station and down Day Lane (nice hill). Then came Sheepcote Hill – another lovely hill but watch out for the potholes at the bottom which I was convinced gave me whiplash.

After that, we went over the bridge and up Stripe Lane from where we decided we simply had to do the long fast glide down past Warren Forest and Rabbit Hill Farm. Then a swift drop down Scarah Bank and home.

Thanks everyone for a great day out.  Steve W 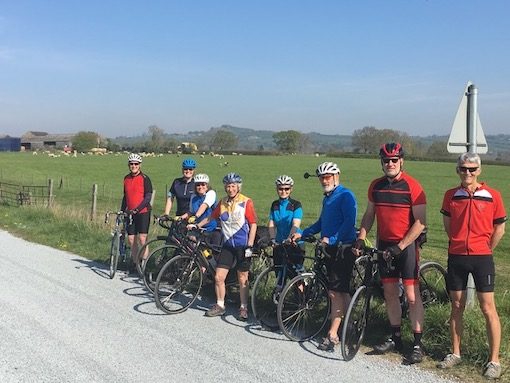 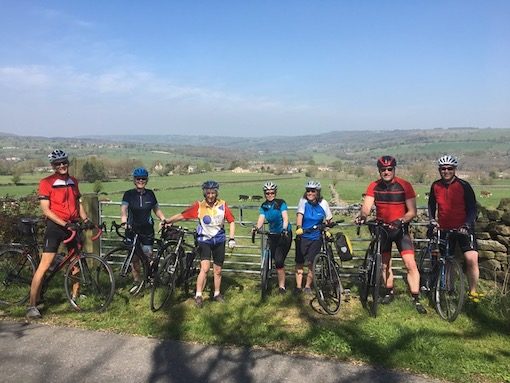