A very swirlingly foggy day for a bike ride. Everyone that chose to cycle with the short ride seemed to have lights. So having chosen a tour of forgotten pathways and back roads of Harrogate and Knaresborough we set off into the murk….hopefully we set off at a reasonable pace, but due to a total lack of wind it seemed quiet easy and painless.
Ten riders made their ways round the Greenway to the Avenue Starbeck, all of Abbey Lane, a fog covered Knaresborough to Wetherby Road, on to North somewhere and baring right to get to Spofforth by 11, when they stopped serving breakfast at the Castle public house.  At this point the super effective back marker left us to get home…thank you Sue T.  As we entered the spacious feeding zone we noticed the blue clear sky and sun. Efficient organised service, loads of space, blankets if needed and a decent if expensive pot of tea or cup of coffee…and croissants available.
After a good old gossip and chat we felt we should continue to Follifoot, where we had a choice if route at the t junction. Left the steep hillier, shorter way or right a more gentle slightly longer route we had not taken for ages. Jane, Paul B, first timers Fiona and Mike chose the shorter and steeper, Monica, Caroline, Jean, Dave, and Sue chose the route down the disused lane and what appears to be a hole in the hedge and over the by-pass to Forest Moor Road and if you are Monica an extra big loop or home via Bogs Lane for Jean, Hornbeam for Dave and  Morrison’s for the rest of us. 22 perfectly pleasant wind and rain-free miles. Caroline G 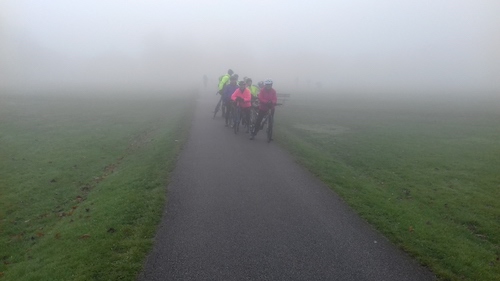 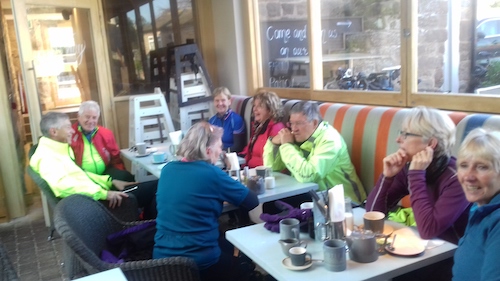 With a foggy start there were fewer riders at Hornbeam this morning. The Greenway was freezing! At Ripley we were a group of nine although Neil and Caroline also joined us briefly. The way was generally up as we passed through Clint and Burnt Yates and then up to Brimham. By this time the sun was out and we could enjoy the views. Early on we had had a discussion and a cafe about half way was requested. The decision finally rested on Fountains, with an agreement that it was OK to add on a few extra miles to the original 28 to accommodate this.

At the top of Brimham we stopped to pose for the team photo and shortly after El Butler left us to head straight back via Rabbit Farm. We were delighted that he was able to join us for the 1st leg of the ride. The rest of the riders proceeded to the Pateley – Ripon road, then headed down it before turning right on to Sawley Moor Road and then Low Lane. We did get a bit mixed up with a large party of riders from the Thirsk area.

By this time we could smell the coffee so it wasn’t long before we arrived at Fountains and despite a long queue it wasn’t too long before we were tucking in. The return was by the quickest route past the Travellers camp and up Watergate Lane where a few minutes were passed choosing and buying eggs. Soon after we were heading through Ripley, onto the Greenway and home. Thanks to Chris, Chris, Dennis, Richard, Liz F, Dave, Colin and Alison for your company. Thanks also to Alison for backmarking. The long rider who joined us discovered (I hope) that it could be just as enjoyable to take part in the conversations and banter instead of eating up the miles with your head down! About 33 miles. Liz P 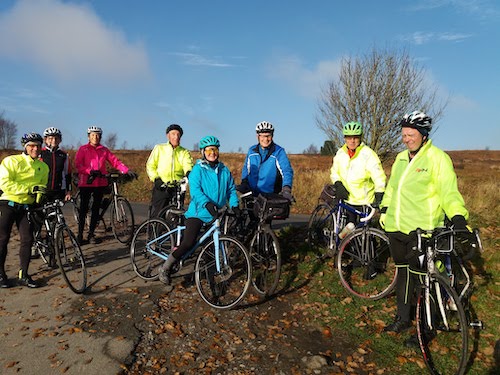 Chris, Gia, Jill, Kevin and me set off for Beningbrough in fairly dense fog, thick enough to evaluate head- and taillights properly. Ours certainly passed muster. The fog gradually gave way to an ethereal light, with the sun just visible, and then to bright sunshine after Aldwark Bridge.

Kevin suggested that David Cameron’s writing caravan should feature in our photo: it wasn’t clear why it was outside the cafe at Beningbrough, but ours not to reason why in these strange times.  Then it was sunshine all the way back, and a light breeze that dropped to nothing by the time we got to Spofforth. A perfect November ride. Around 46 miles. Justin K 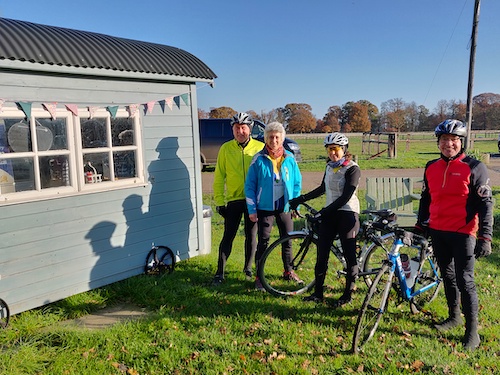 Despite rather a misty start, the promise of autumn sunshine brought out a large gathering at Hornbeam and eleven joined the ‘brisk group’ for the favoured route to Beningbrough.  We rode true to our namesake and were soon at Aldwark Bridge where I’m pleased to confirm that, as yet, there’s no hard border which gave us tariff-free, freedom of movement to the East and the rather lovely Farm Shop at Beningbrough for re-fuelling.

The ride back was as good as it gets for mid-November with glorious late season sunshine and lovely scenery.  I nearly managed to lose a couple of riders, sorry boys, but regular headcounts on the return journey run kept us together as far as Little Ribston where we started to peel off for the various routes home.  Yet another lovely day in the saddle. Thanks everyone.  Helen B 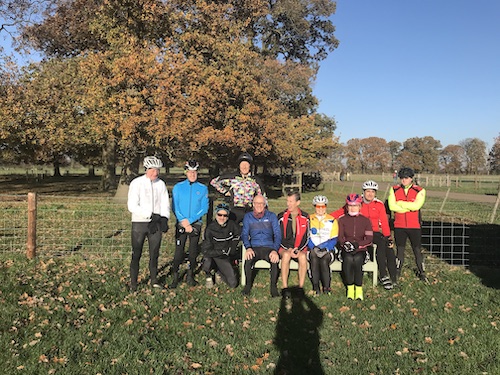 We then got back on track and ended up at Cycle Heaven at 11.40am to find that it was rammed and were not doing hot food due to the demand. So we all had coffee/tea and cake portion control was not in evidence you could feed three people with each slice, no complaints from our group.
With very heavy cafe legs we set off back towards the race course to Askam Bryan to Tockwith where we said goodbye to Martyn.
The pace was its usual brutal grind to Cowthorpe at the Knaresborough road into Little Ribston we said goodbye to Tony, so the last eight riders keep the pace up to return in glorious sunshine via Follifoot and the last hated climb of the day The Showground Hill. Approx 56miles at 15.7 mph 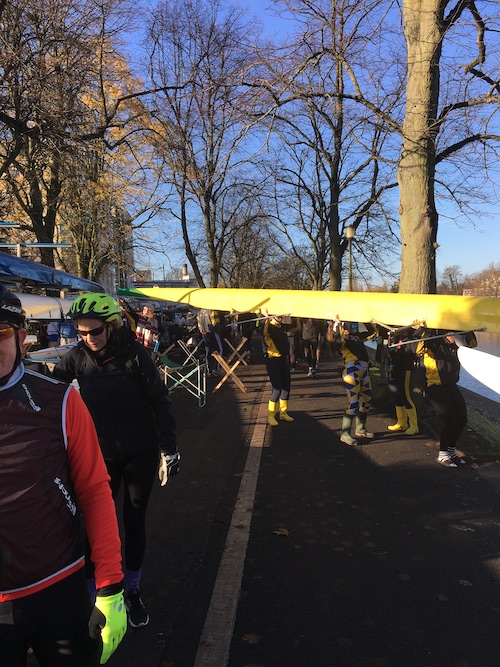 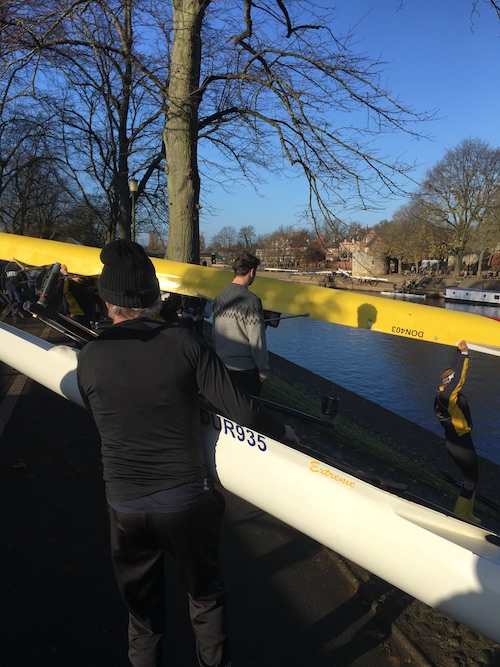 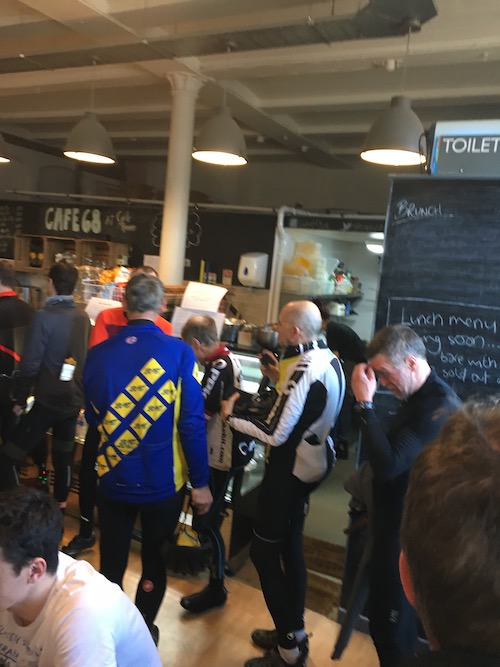 This ride was a late addition prompted by a good forecast. Thick mist in Harrogate and Knaresborough didn’t bode well, but by the time we reached Ripley the mist was lifting and the sun coming through; and we were in sunshine for almost the entire ride.

Six of us at Ripley, through Fountains and Laverton, at Kirkby Malzeard the democratic decision was to go “over the top” to Masham. No long-distance views despite the sunshine, but they have patched that awful pothole at Warthermarske. Home more or less the usual route via Kirkby Malzeard and Fountains. Colin T 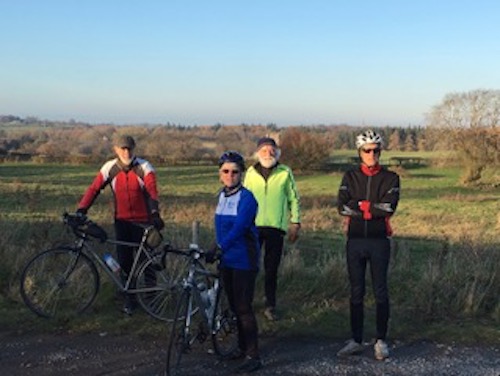 With no leader and no route, it was up to the four of us to decide where to go. After some discussion it was decided to go to Ampleforth. Once the Medium-Plus boys had overtaken us, and the thick mist had cleared, it was plain sailing to Ampleforth via Boroughbridge, Sessay and Husthwaite.  We arrived at Coxwold a little too early so we added in a loop using Colley Broach Road and arrived at the Abbey dead on 12 o’clock.  Since our last visit the location of the tearoom has been changed and is now nearer to where we park the bikes.  Now it was time to set off on the homeward route, but disaster struck as Colin’s gear change had broken leaving him stuck in top gear.  With some judicious adjustment carried out by Phil, Colin was left with three useable gears.  The return journey via Gilling, Yearsley, Easingwold and Great Ouseburn was incident free.  Hats off to Colin for his sterling effort in maintaining a creditable pace on the return.  In all it was 65miles in the bright autumnal sunshine.  PCJ 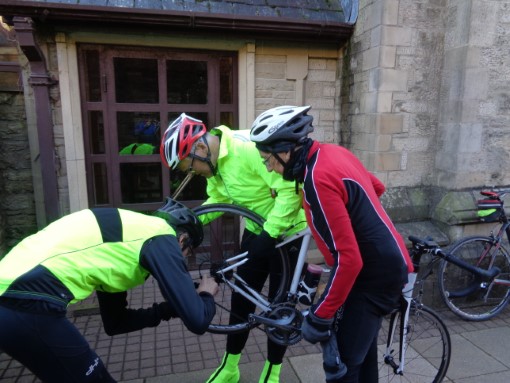 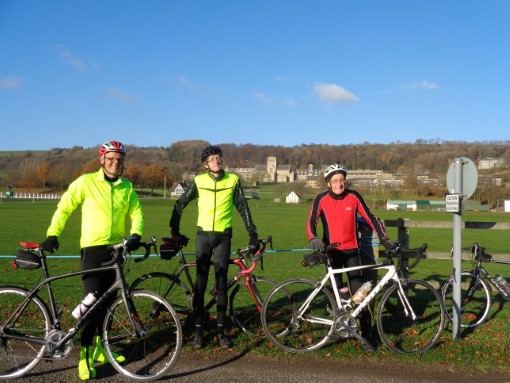