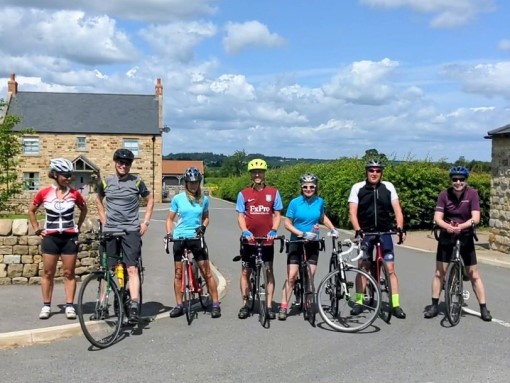 On a fabulous morning there were plenty of riders for the medium ride. Splitting into two groups there was five of us departing Hornbeam for a slower ride. Paul, Bridgette. newbies Stuart and Tracey and myself. We were first away and arrived at Low Bridge to find Mike P waiting. The brisker group passed us at this point. Good progress out to Farnham where Bridgette decided it was too warm and headed back home. Across the bridle path to Roecliffe and Boroughbridge. Had to refill water bottles as it was really warming up by now. On towards Dishforth before turning for Marton le Moor and Sharrow. We arrived at Spa gardens as the brisker group were leaving. We took our time and good conversations as always took place. Off to Littlethorpe and Bishop Monkton. We had decided it was too warm for the climb out of Markington so we headed back via Copgrove Farnham and home. Well done to Tracey on her debut with WE. She intended only doing the short ride but as there were no takers took a chance with us. So probably more miles than she intended on a day that was perhaps not ideal for a first ride. Hope to see you and Stuart again soon. 38 miles for me. Colin B

It was a scorcher of a day – route 268 out to Bedale. Vince, Glyn, Helen, John, Debs & David went off in the 1st group with Peter, Steve, Liz & Tall Tim in the 2nd group. Liz left us at Ripon & the temperature continued to press down on us all the way to Bedale where the 2 groups came together as we searched for a café that wasn’t jam packed. The answer was a new bike shop & café called Tandems – marvellous. A long hot journey home followed before sitting down in front of the telly to see if Mark Cavendish could win on the Champs  de Elysee. 61 miles.