After the previous days’ attempts by Gareth and Hannah to wash and blow us away, it was a relief to find the bins, pots and trees in place – not to mention sunshine and a mere zephyr. Of my short repertoire of rides the aptly named “Hole in the hedge and sloe/w gin” route always wins. Seven of us were ready in the top carpark – feet on pedals – when Monica announced that she had a puncture. She had stopped on the way to pump it up but things remained suspect. Grabbing their repair kits, not to mention strength and determination, Max and Paul B leapt into action using highly technical language as the tyre and inner tube were inspected, pontificated over and replaced. The lady members gave much verbal support and when things were looking promising and toes were numbing, they set off to Forest Moor and Thistle Hill, Knaresborough. Dennis remained to be the repair-corner dispatch rider in case messages needed to be brought to the front and indeed, they did. Having traversed the ring road, we were safely through the hedge when word came that further attention was required but that they would catch us up. We shot along the old road and were ready to cross the A661 Wetherby road and right into Follifoot when Monica and her lads hove into sight and our party was complete. Apart from a rather unpleasant burst of sleet, the sun continued to shine but as we turned north towards Knaresborough, the wind blew into our faces causing momentary instability and subsequent rude thoughts. By this time, we had passed the sloes summit. A decision re extending the route was made in front of the Brethren Meeting House – the result was unanimous – return via Abbey Road. Four opted for coffee at the Black Mulberry and Dennis, Max, Jane and I headed for home because of commitments. I think the coffee swiggers would discuss their need for more miles, showers or log fires… Thank you for being wonderful players in all circumstances!  Sue Downes 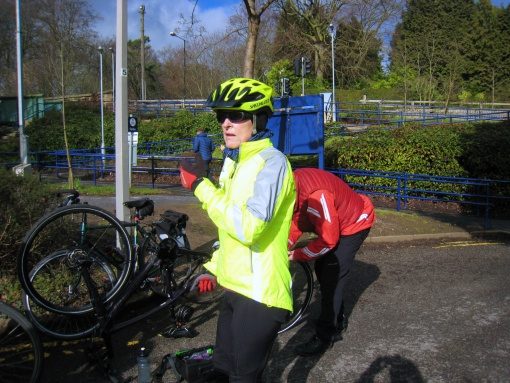 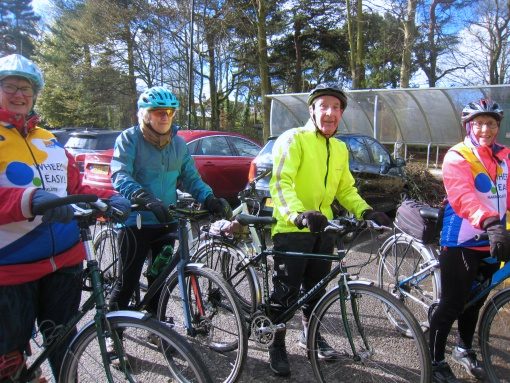 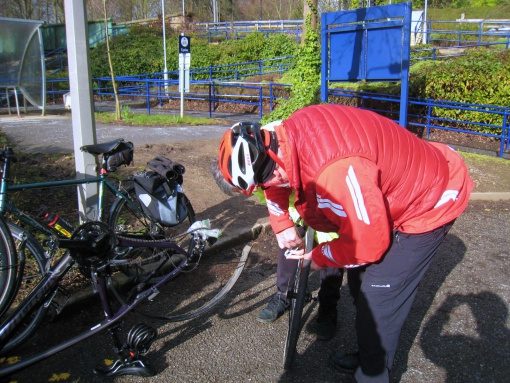 Seven, soon to be eight, people set off from Hornbeam to Ripon and Boroughbridge, on a rather nice morning which was better than forecast. We took the usual route down to Low Bridge in Knaresborough then on to Farnham and Bishop Monckton, to the bridge over the canal at Ripon where we paused for group photos.

It was there when we started to notice the effects of the rain over the last few days as the fields around the River Ure were flooded. As we went on through Skelton-on-Ure, the flooding worsened and the river was  close to flooding the road near the bridge in Boroughbridge.

We stopped at Plenty for a coffee and a bite where we were rewarded by an appropriate monologue about Noah and the Flood, very ably recited by Mike.

Our published route back should have taken us up the bridleway to Copgrove but since it’s prone to flooding itself, we took the alternative route through Minskip and Stavely back to Knaresborough and home. About 33 miles in very good company. Al D 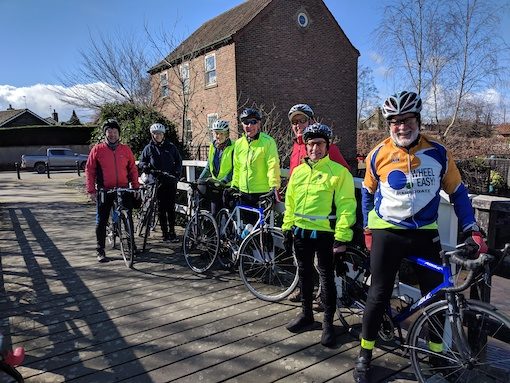 There were loads of takers for today’s ride, despite the impromptu Long Ride taking some of the regulars, and the threat of hostile weather. The two main groups were 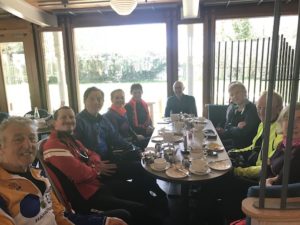 indistinct as far as Ripley where my team decided to press the accelerator a bit harder, knowing that there was a “sweeper up” behind us.

The wind chill was extreme at first but strangely we gradually became accustomed to it until it wasn’t really noticeable at all. Brimham was gained without too much pain, despite the said wind being directly and strongly on the nose, but my promises of better things to come seemed to just tip the balance.

As we gained the edge of Pately Moor and turned right, the whole picture changed since we now had the wind behind us. Things got easier, and warmer, and we thoroughly enjoyed the downhill romp to Fountains newly refurbished visitor centre for a coffee, a snack, and most importantly, a chat.

I counted eleven of us at Fountains and already one or two had gone off on their own to meet commitments at home.

There was a popular call for a route change taking us back to Ripley via Watergates Lane; a most satisfactory route back and a nice variation on the usual schlep from Ripon, and, of course, avoiding Knaresborough Hill.

Thanks everyone for a most pleasant day out; let’s do it again next week.     DaveS.

As Dave S says, about 20 of us cycled together as far as Brimham Rocks. Dave leading from the front and me from behind. The cold start was no bad thing when working off the calories against the wind to Brimham where we formed into smaller groups. That left about ten of us.

What a glorious day it turned out to be. The joy of cycling along Dallowgill Moor and downhill towards Fountains Abbey with the wind behind us was felt by all. Lunch at Fountains. The wind followed us all the way home.  We decided that the most pleasant way back to Harrogate was through Ripley rather than through Knaresborough. Mike W bravely followed the proper route on his own – through Littlethorpe and Bishop Monkton. Hope you got home OK Mike.  A great ride. Thanks everyone. 39 miles with 801 metres of climb.  Steve W 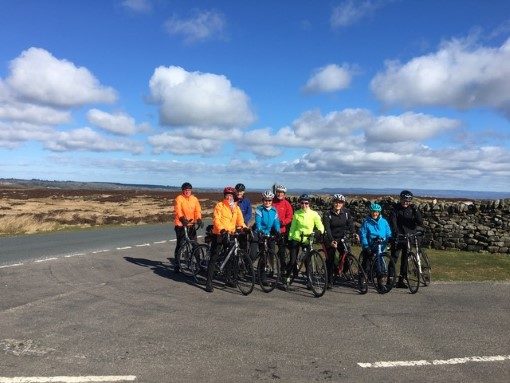 Peter Roberts had suggested doing “Phil Stell’s The Twiddly Bits North of Thirsk” otherwise known as Ride Route 213.  Four riders joined Peter in this venture and set off from Hornbeam Park full of gusto.  Everything was going according to plan until we reached Kirkby Knowle where doubt set in concerning the correct route.  This was mainly due to previous attempts ending up with riders getting lost trying to avoid the A19.  Aided by maps and lots of advice we crossed the A19 at Knayton, and using a quiet unnamed road and the A618 made our way to Thirsk.  At the tearoom there was a debate as to what was the right route as we seem to have lost about eight miles.  Considering the vicious headwind that we had to contend with on our return to Harrogate some of use were grateful for the reduced mileage.  PCJ 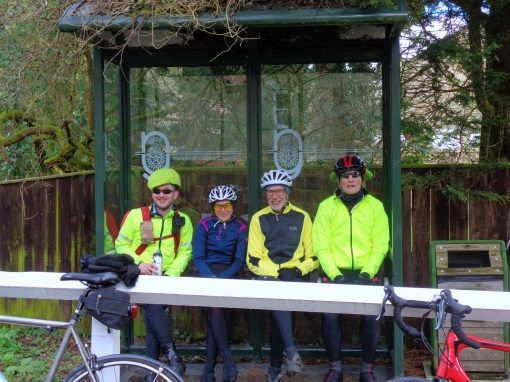 Six of us ventured off road to-day.  First 2 tracks were easy to find, the third had us trudging round in muddy fields, and we decided to just go back the way we had come. But we did find a lovely sheltered spot to stop and eat a snack.

(You were right Paul, as soon as I got to the large scale map at home, I saw I should have ignored the bridle path up the hill and gone through the gate, the track I wanted is on the right just a bit further on.)

But it didn’t rain, nobody punctured, and we had really clear views including Roseberry Topping.  Colin 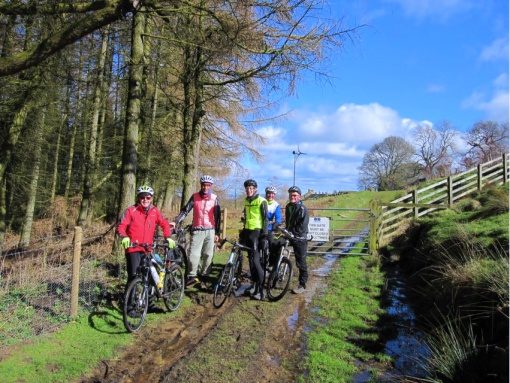 Want 25 degrees or more at this time of year? Try Andalucía. 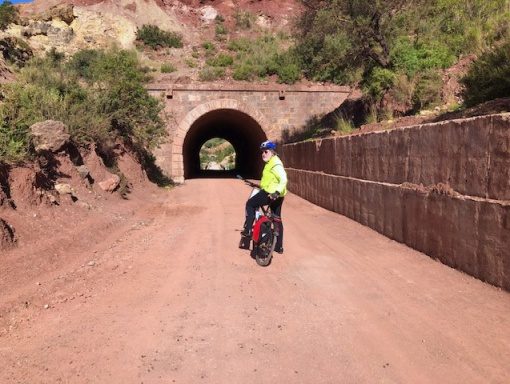 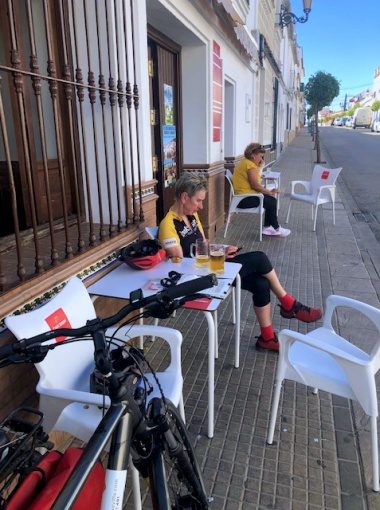 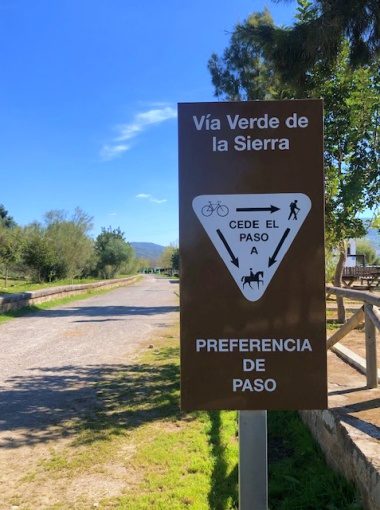