Six riders out today making good use of the mild weather. Welcome back to Mike from Ilkley and Corrinne. It was Corrinne’s first ride since fracturing her elbow last year. (Not cycling related).

We rode as planned, Showground, tip, Forest Moor Road to Knaresborough, Abbey Road, Wetherby Road, Manse Lane, then a busy stretch of the A59 to the Flaxy turnoff, on to Coneythorpe, Arkendale, where Dennis left us, the remainder continuing on to Staveley. No-one opted for Boroughbridge so back to Farnham where we did opt to lengthen the route, taking the road to Scotton, Ripley Road, Brearton, Nidd, A61 to Ripley where we had a welcome cafe break.

Peter and Paul flew back to Harrogate at this point. The cafe at Ripley was packed. The mild weather must have brought everyone out. Back to Harrogate via the Greenway. A very pleasant 27 miles. Jean B 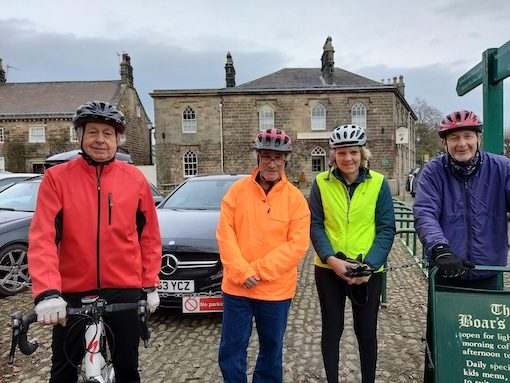 We were a group of nine today which meant we could ride as one group. Also most of the group knew where they were going so the leader was redundant. The route was Burn Bridge, Kirkby Overblow, A61 for a short distance, via Weeton and Castley to Pool then along the A659 to Otley with a short diversion round an invisible lake, lead by Steve. The majority decision was to eat at the cafe by the playground at the north side of the Wharfe. Fortunately we could all find seats inside and were soon fed. However beware – some of the portions are huge!

Our return route was mainly upwards, to Leathley Bridge, Leathley, Stainburn, Almscliffe Crag, North Rigton and to the top of Brackenthwaite Lane. The views made up for the climb which everyone managed without too much difficulty. At the junction Dave P, Dave M and Sur John headed home via Beckwithshaw while the rest went to Burn Bridge heading homeward from there. Thank you to John for backmarking and photography duties and everyone for a grand day out. About 31 miles and a lot of feet but my Strava has still not loaded! Liz P 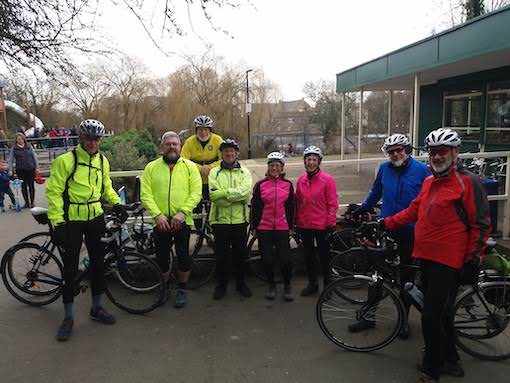 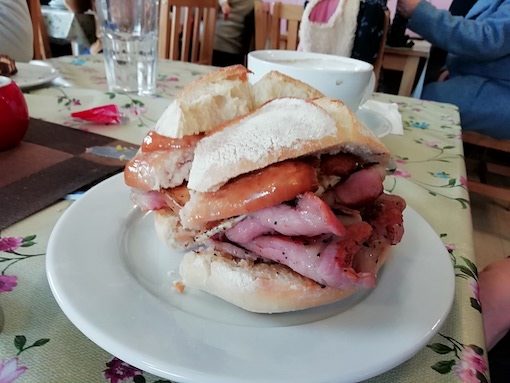 Seven men set off on the medium plus faster group wondering why the day was so cold and damp and not quite summer bike weather. The usual brisk pace was helped by a tail wind and we arrived in Ripon after 50 minutes and decided it was too soon for breakfast/lunch.

We carried on and after some debate decided to go to Masham for food as did half of Yorkshire by the look of it. Having stuffed ourselves we headed for Swinton Hill to warm up and then a nice blast back to Ripon and onto Markington losing a few riders as they headed off home.

Finally working our way along a very busy Greenway to end a great ride 55 miles lots of hills and tired legs.   Paul B

After a brief discussion regarding the route , nine set off to do the reverse of route 122. We decided it was better to get the hills out of the way before the coffee stop.

Off we went to Ripley via the green way . Our numbers soon swelled to around 15? I stopped counting after a while…. We met Allen at Ripley after Vince called him regarding the change of route and Gill joined us after Ripley. The route took us up Clint bank , through Burnt Yates on past Brimham Rocks. A very kind motorist stopped to let some not so patient motorists pass us , we all thanked him and he told Eric we were the most gracious cyclists in the World …. or something like that..

Past Brimham Rocks on to Fellbeck , Grantley, Galphay and coffee at Ripon. Vince needing the coffee after a swift puncture repair. We caught up with the other Medium Plus riders in Oliver’s Pantry, which was very busy and we had a shortish wait.  The wait was worth it for as the poached eggs on toast looked great and according to Helen the Mushrooms on toast were delicious.

Julie left us before coffee and after refreshments we all headed back to Harrogate via Knaresborough. My Garmin has failed to sync but per Ride with GPS 48 miles with 2,550 ft of climbing. A bit windy coming out of Ripon but other than that a lovely day for cycling. Great company and great scenery. Thank you all. Zoë C 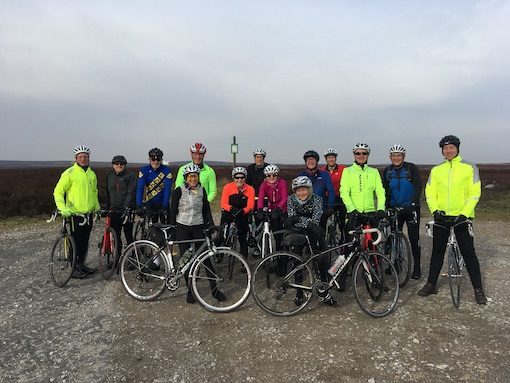 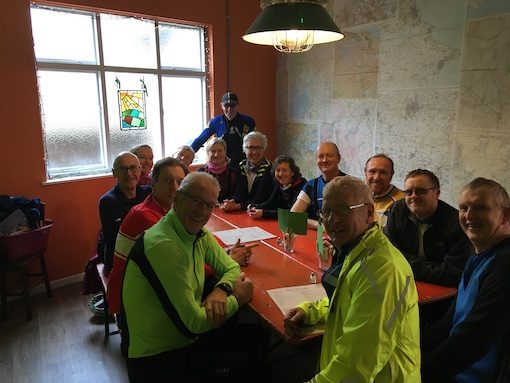 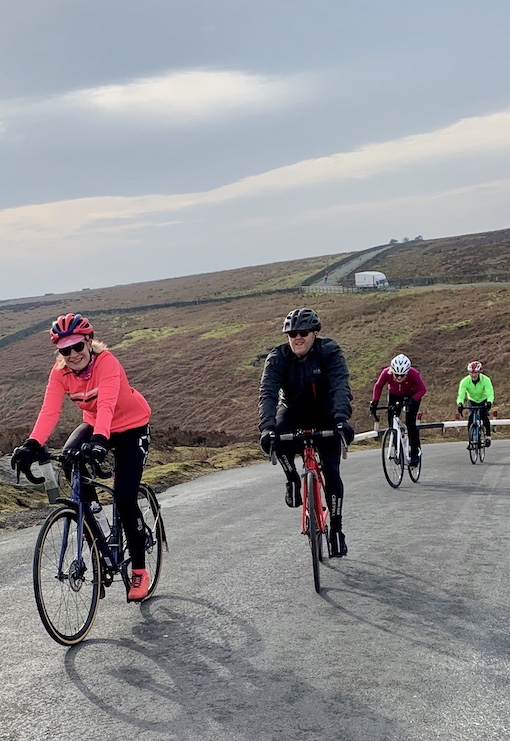 Having already decided to do the Medium Plus the opposite way round, a small group comprising Gia, Debbie, Charlie, and myself headed down the Greenway to collect Paul, Colin and Alan in Ripley. More by good fortune than by precise planning we met with Paul at the crossing into the castle park at Ripley, but unfortunately a family crisis meant an immediate recall home for him and so we continued into Ripley, collected Colin and Alan who were nearly kidnapped by a faster group ahead of us and headed through Burnt Yates to Brimham.

The prospect of good weather had clearly brought the crowds out as the road to Brimham was like the M1! At this point we separated and Colin, Alan and I headed across the track and over the moor to Grantley, Galphy and Ripon whilst Gia, Debbie and Charlie opted for a more direct route into Ripon, which gained them a table in Olivers Pantry and left us at the end of a long queue. We instead repaired to Booths where there was plenty of room and enjoyed some  good and inexpensive food and drink.

The group then came together for the run home through Littlethorpe, Bishop Monkton and Occaney, where Zoe’s bigger faster group joined us for a photo. Lingerfield and into Knaresborough was the last leg before going our several ways home. Just over 47 recorded miles in the usual good company and with good weather for the time of year. James G. 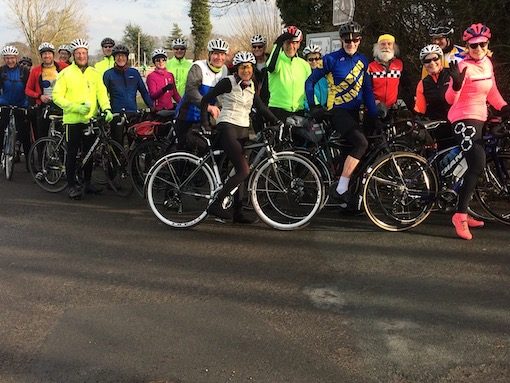 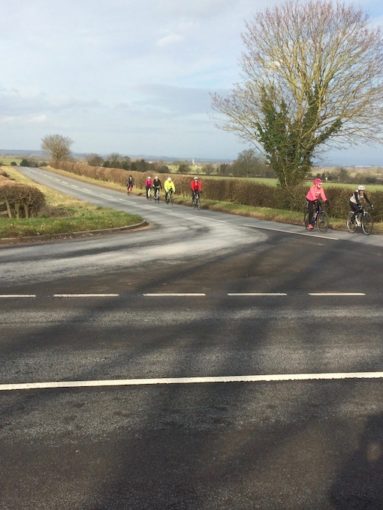 On through the showground down to Low Bridge at Knaresborough were we picked up Mike, Tim and (apologies name escape me) I think one of the EG’s, they were expecting the other group and had to make do with our motley crew! On through Knaresborough up to Farnham, Unfortunately one little person in front, chugging up the hill changing gear, locking her chain up, did not realise that the whole group was very close to her behind. A big crash as Mike W caught my back wheel and hit the deck and another luckily landed on the grass. Mike was fortunately unhurt, a quick check no broken bones or bikes and we carried on and turned towards Burton Leonard.

The nine of us sped on towards Bishop Monkton and through Littlethorpe, it was too early to stop for refreshments at Ripon, With no options for cafes the group carried on with the decision of aiming for G&T’s. Turning right to Galphay a lovely route I had not done before, despite it being a narrow lane, there were lots of cars to avoid.  A few uphill’s and suddenly over the top of the hill came Zoe with the massed cavalry they flew down the hill, as we crawled up it, passing us shouting ‘Hello’. After a few more ‘uphill’s’ the front of the group headed for G&T’s and we missed the turning for Fellbeck and went straight on towards Rispley and G&T’s.

After our refreshments it got disjointed which way we were heading home. The group followed the long slog up the hill towards Brimham Rocks, where it was decided to turn down Rabbit Lane rather than go via Burnt Yates and Hampsthwaite. A lovely swoop down, then turned right to Ripley, along the Greenway and home. Good laughs, good company the sun came out on the way home. Thanks to our stalwart Justin for back marking and doing his best to keep us on route! 44 miles. Liz F 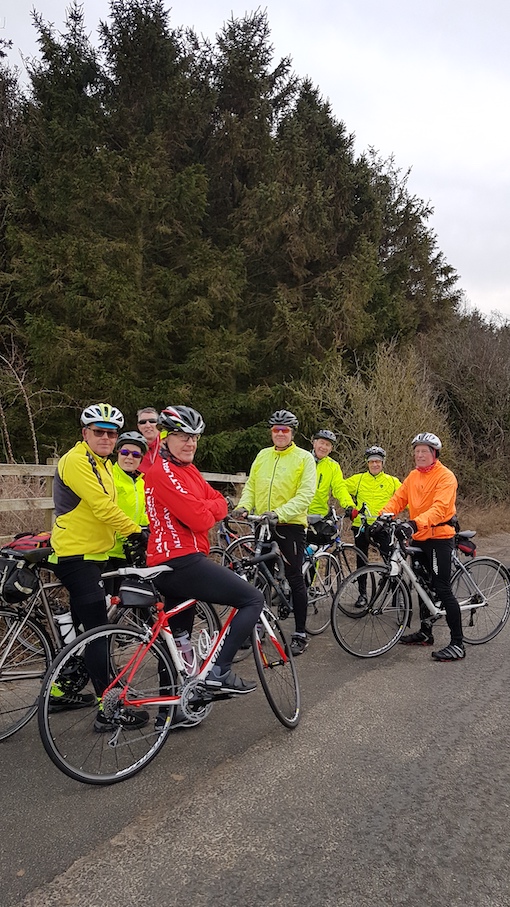