It was a perfect winter’s day with no wind, no rain and no ice.  Our group of 12 divided itself wordlessly and seamlessly into two groups of six and set off briskly, looking forward to Brackenthwaite Lane for a thorough warm up.  At Almscliff Crag a friendly dog walker took our picture as we regrouped and had a chat.  That was the tenor of the day – ride, chat, regroup, repeat.
We were three quarters of the way round the ride before finally stopping for lunch in the café at Thorp Arch, which accounted for the loud rumbling noise of our tummies that had been gathering momentum for quite a while!  The upside of this was that we only had 12 miles to go after lunch as a very pleasant tranquil day drew to a close.  We had covered all the usual topics and finally concluded that we were having a much nicer time than Boris and Prince Andrew.  A very enervating 40 miles in excellent company.  Helen & Keith T. 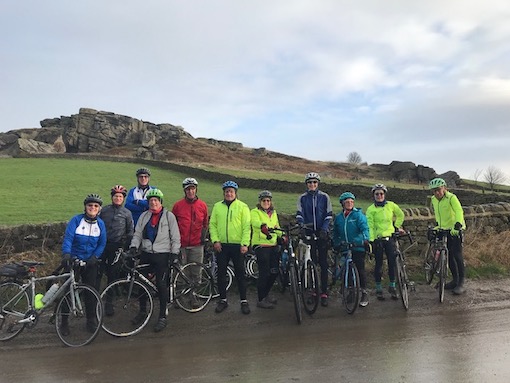 7 of us set off from the show ground for a 20 mile “ shortish “ ride through the Mountgarret Estate!
It started to rain about 5 mins. into the ride but luckily it didn’t last too long!
Nobody got lost and that included the ride leader!
We had a cafe stop at Ripley and Jill and Rachael had Poached eggs on smashed avocado on toast and we all wished we had followed suite as it looked delicious!
Our back marker Paul left us at Ripley as he had a slow puncture and wanted to get home before it needed pumping up again!
Thanks to all for coming a great group  and a great ride and who all got on so well!
The essence of Wheel Easy!!     David Stross 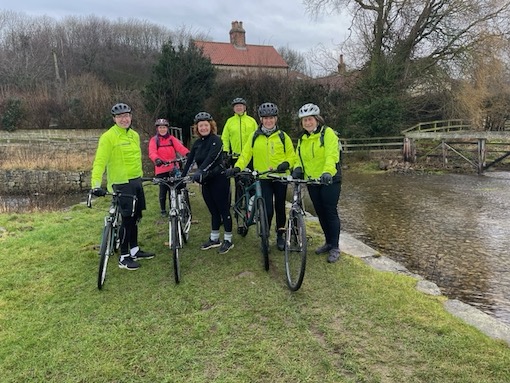 Route 252 on a rather cold & damp morning. Groups of riders split & met as we journeyed along before all gathering at Boston Spa only to find there wasn’t any space at Da Carlos. On to Thorpe Arch where it was also rather busy. There was a delay in service for some that meant that new groups were formed as we left – passing a number of Wheel Easy compatriots as we did so. Back via the Deightons to find the sun coming out & the temperature finally rising. 41 miles. Tall Tim. 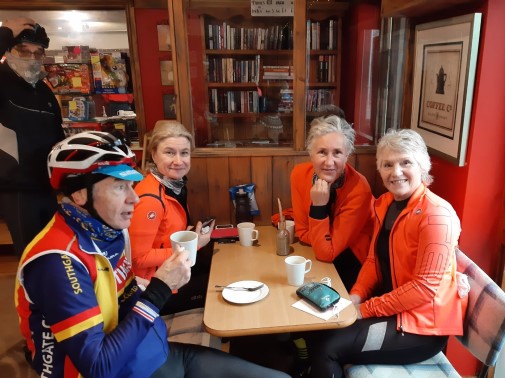 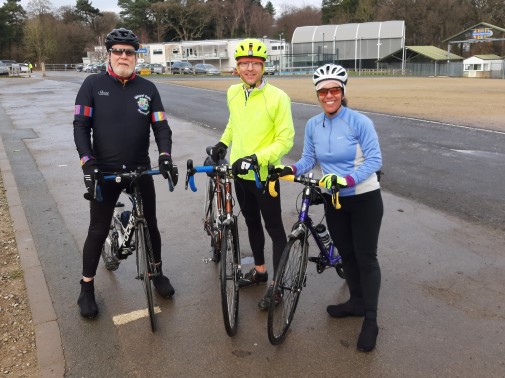 Seven of us followed the route description, more or less, and despite various meet ups with Joe’s group we managed not to cause any trouble. Sophie’s was too busy for us inside so we went in to the chilly tent. Apparently there is a shortage of gas bottles. Anyone with a spare please take it to Sophie’s! despite some early rain over Little Almscliffe, by the time we crossed the A59 it was dry and clear and we had a good run round the lanes arriving at Sophie’s in time for lunch. Thanks everyone for the ride, sorry Allan you did not make the photo. 32 miles. Gia 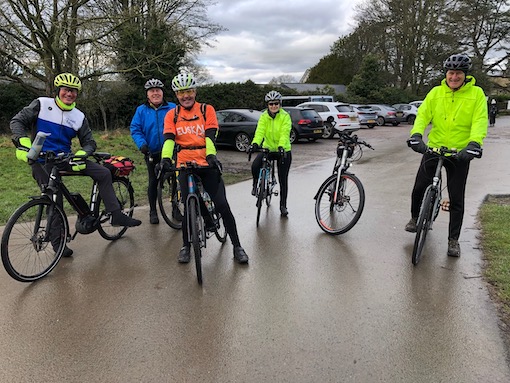 There were 13 takers for the Medium Steady Ride towards Menwith Hill, including Ruth, who is essentially new to Wheel Easy! (she came the previous week but fell off on the ice in the car park and wisely decided to call it a day). The weather was dull and cool, but no rain was forecast, and the wind was supposed to be moderate. James took a sub-group, so about 8 of us went to Hornbeam and on to the newly-resurfaced Leadhall Lane. At the Squinting Cat it started to drizzle, and the wind picked up a bit. Beckwithshaw and up to Little Almscliffe. Geraldine took the photo at the usual place by the car park. On to Otley Road and then Wydra Lane and down towards Fewston Farm shop (which is under new management). I was getting distinctly cold by this point, but we carried on over the A59 and on to Meagill Lane, and right down the barriered road past the listening station, but the other group (which we kept bumping into) continued straight on towards Thruscross. We went past the Camp and along Menwith Hill Ridge towards Birstwith and Hampsthwaite. The official route went down into Staupes, but we continued along the ridge to Clapham Green and down to Hampsthwaite. Two riders took advantage of Sophie’s, but the rest of us continued up Hollins Lane and back to Harrogate via Knox.     About 25 miles.   Joe 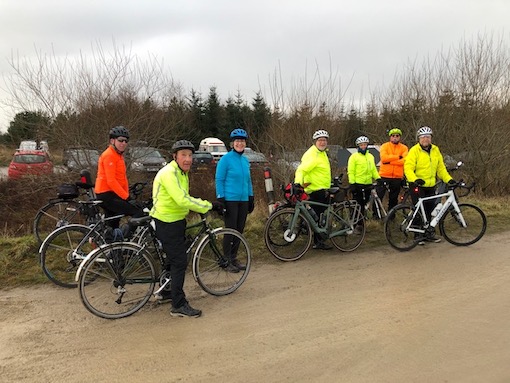