After a late night I decided not to get up as the rain hammered on the window and forego today’s rides. After prowling round my lair I decide to make for the hills as a lone wolf, thinking I might meet up with the Medium ride. A ride down the Greenway along to Ripley cold and chilly but dry. A cycle through Hollybank Woods and along the top to drop down to Birstwith. Stopping at the end of the road I could see the snow-covered hills in the distance and realised what had come down as rain in Bilton was snow in the Dales. Swooping down to Birstwith just a wet road, but on reaching the turn to Darley the main road was full of icy slush and did not look as if it had been salted. Carefully I cycled along in the tyre tracks which had cleared the slush to the side of the road towards the toll bridge. The snowy slush was covering most of the road. I thought if the toll road is icy and snowbound I would have to find an alternative road back. Lucky the toll road was mostly clear and I climb up to Staupes Lane. This road was full of snow and ice but the cars had left tracks which were wet and free of ice. The views were spectacular with the snowy hills, I was quite puzzled by the amount of snow and slush it must have been a blizzard to hit the area to leave this amount of snowy slush about. Reaching the end of Staupes Lane and the main road leading up to Brimham Rocks it also was full of slush and ice. I went over to the farm café I could not believe the amount of ice and slush around. After a drink, and trying to avoid the kid’s party groups, the farmer’s wife said to me ‘Where are you going’. I said I was heading to Brimham Rocks depending on how the road was. I was told not to go up that way as the roads were really bad and could be icy, the snow had covered the roads further up and were difficult to drive on and best to go back via Burnt Yates. I turned left back to Bedlam and the road was slushy at the sides and a few deep pools of water covered the road in places. On to Ripley where I met another lone wolf, Colin who missed meeting any WE cyclists and had cycled over the Boroughbridge area but had not encountered any snow or ice.  It was a mystery or did I not hear the correct weather forecast or did I dream it. Lone Wolf. 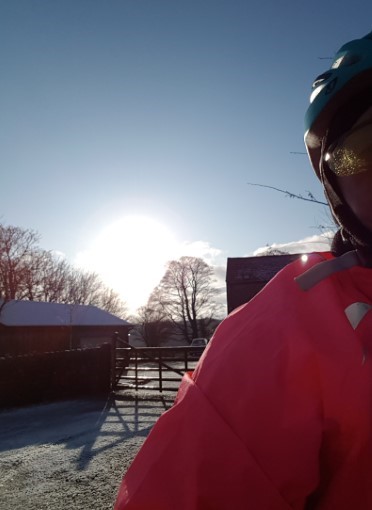 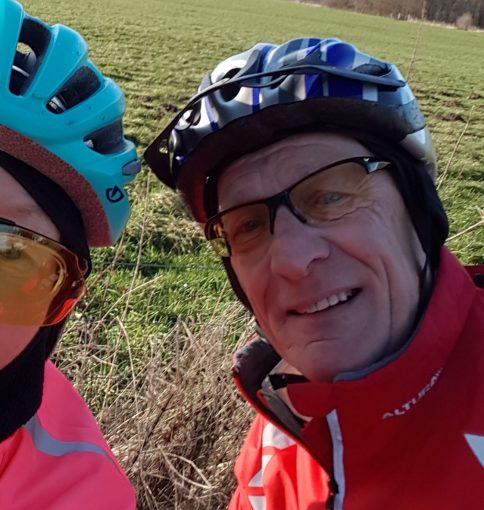 Medium Plus Ride (Not)

Living in Knaresborough I decided this morning I’d meet the Medium Plus ride at Low Bridge. When it got to 10 and the 3 members of EG’s had departed I realised something was amiss. Since I had gone to the trouble of getting the bike out and dressed in suitable attire I decided I may was well have a ride. So, along Abbey Road and up Wetherby Road only to wave at James who appeared to be heading home. Ah ha I thought – this is telling me something. !!?? So, I headed for Farnham, Staveley, Minskip and Boroughbridge on wet but ice-free roads. On to Roecliffe and Bishop Monkton (bit of flooding in places but passable and virtually no traffic). Into Markington and the drag up Dole Bank where I decided I’d had enough. So right down Scarrah Bank into Ripley where Liz F caught up with me before the Greenway. We exchanged todays riding experiences and then rode together up to Bilton Lane where we separated to go our own way home. So, no rain etc. Not quite the route Gia had planned but 28 miles nevertheless. Colin B