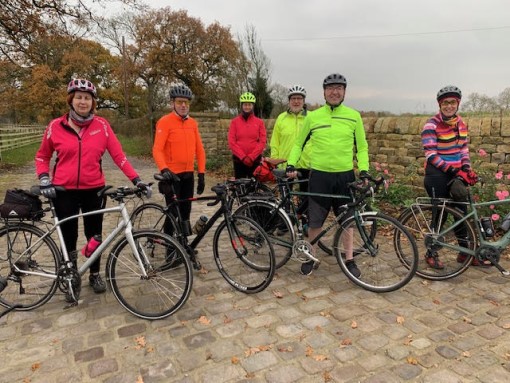 We started off with 10 at the Showground for a ride to Brimham, without a leader. James was good at shepherding us, but was careful to point out that he wasn’t leading… Geraldine led us (!) to the start of the Greenway and we made our way through the leaves to Ripley. Dennis remembered he had to get home to put the heating on, so we were down to nine. More leaves through Hollybank Wood and then right up Clint Bank to the Pateley Bridge road. Allan had some problems with his jockey wheels in Burnt Yates (what did Yates do to deserve that?) and was unable to continue. Fortunately, he was close to home and it was downhill. We stopped for the 2 minutes’ silence and then continued to Brimham, Warsill and down to Ripley where, for some reason we were down to seven for coffee. Good to see Sarah and Bridget again.

-Tired legs
Thanks to all, especially to Mike W for leading.Alison N 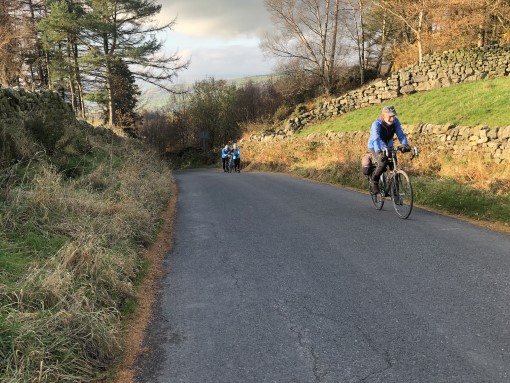 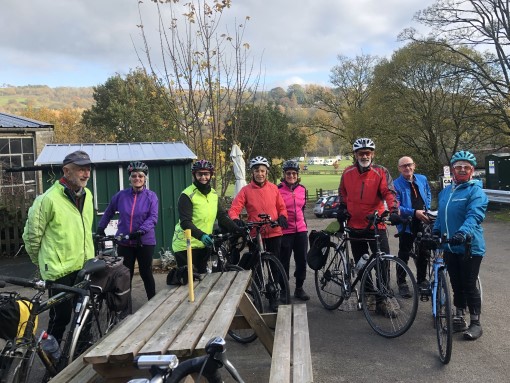 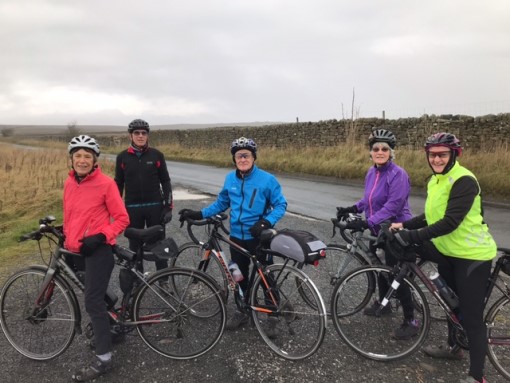 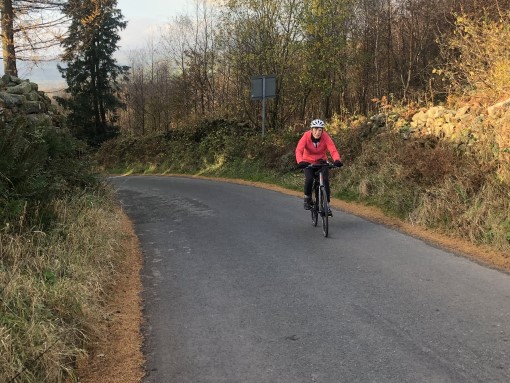 Medium Plus- Brisk – 12 riders for this ride so easily split into two groups of six- until Chris B, a late comer made our group seven. The route took us up Pot Bank and down into Hampsthwaite and then up to Clapham Green. We made our way without incident until – David W broke a spoke on his front wheel. Fortunately it was at a junction at Darley but it was the loudest crack I’ve ever heard. Unfortunately he decided to limp home on his own- we hope you got back safely David. The mizzle had started and we were right on the top of the moor when 11 o’clock struck. We observed two minutes silence and some lovely words from Tim (T4). As Helen was nursing a poorly bike she took it slowly down two stoops but we all made it safely – it’s never an easy descent. Wildings was closed and the Pancake House was ‘rammed’ so we returned to Teacups. I was so pleased that we ‘re-engaged’ with this ‘no frills’ cafe. Another two wheel easy groups had the same idea and after the obligatory three halves of toasted teacake we set off for Glasshouses. Peter L decided to return via Greenhow and Duck Street so then there were five. We made our way up the three (or is it four) hills, past the Llama farm through Smelthouses to the Brimham crossroads- Chris B singing/whistling as he climbed. I had no breath for any of that! When you get to the top of Careless Lane it’s such a treat and the sun started shining-glorious. Past the Drovers, down Scarah Bank and along the Greenway to Harrogate. Lovely ride – 39 miles for me. The other rider not mentioned above was Peter J. Janet G 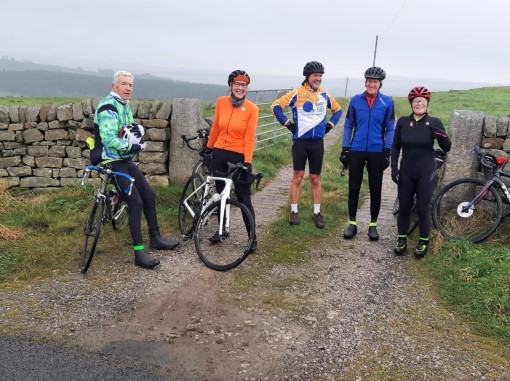 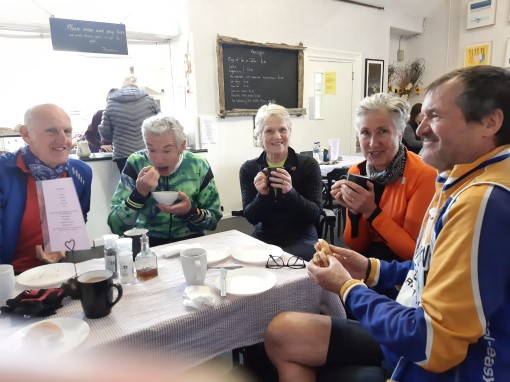 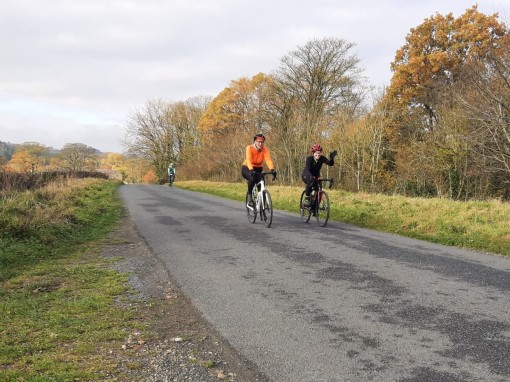 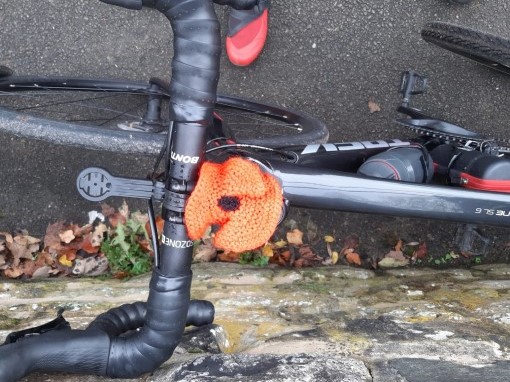 The dozen who wanted to go on the brisk ride at start were divided into two groups of six. The route (198) entailed going to Beckwithshaw, Pot Bank, Hampsthwaite and on to Darley where Richard peeled off to be home early. At 11 am, just before the decent of Two Stoops and shrouded in mist/cloud and drizzle, we stopped to observe the 2 minute silence. At Pateley Bridge, Mark left us to continue to Silver Hill and Trapping Hill, leaving Julie, Vince, Andy and I to look out for a suitable venue for refreshments. Wildings and two other cafes were closed so we opted for The Pancake House. It make a nice change and the waitresses were very obliging. The journey back was through Smelt Houses, up the 3 or 4 hills to Brimham and down the delightful Careless House Lane past Rabbit Hill Farm. We used the Greenway to arrive back in Harrogate. A good, hilly route with good company – 38 miles with 3275ft ascent. Tim R 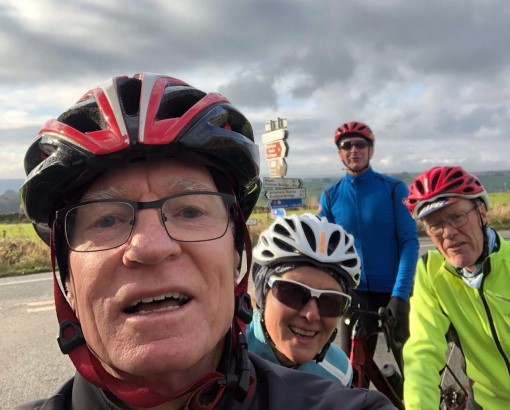 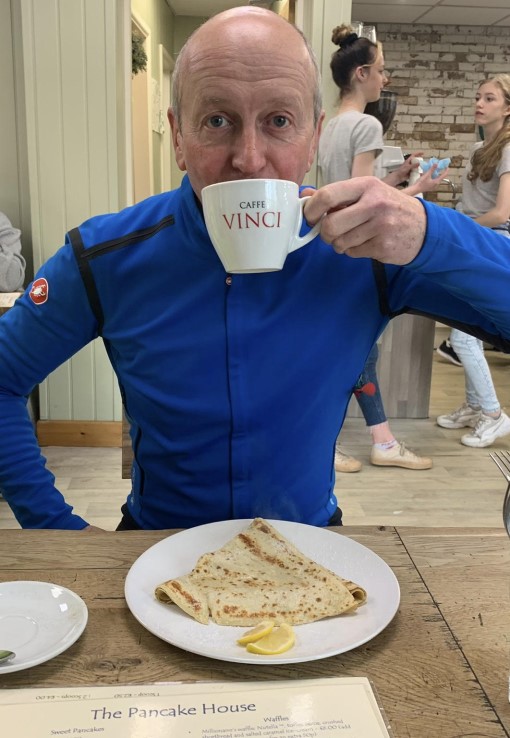 It was decided to do route 266 to Bolton Percy. We met at 0900 at Hornbeam seven riders were there including Helen B, nice to see her joining us. Much confusion at start that I had omitted to mention that we would be going out on route in reverse. So poor Helen went in the direction of St John Fishers while the rest of us went towards the newly tarmac Leadhall lane. We stopped half way up to check on Helen she was on way to Knaresborough so we agreed to met her in Wetherby.
Darcey, Trevor, Paul, David, Mark and Grant headed to Kirby Overblow to Wetherby. We stop at M&S in Wetherby to call Helen to discover that she had had a unfixable problem with her chain and rear hanger, and she was walking back to town to go straight to get it repaired. Nightmare for Helen.
We then headed of to Thorp Arch to meet Martin and Johnathon on route. Martin is responsible for our group pictures below. Route was Wighill to Tadcaster and on to Doylys for the cafe stop at Bolton Percy. We arrived with only three bikes at the cafe, when we left there must have been around thirty cyclist. Good to see so many out but luckily for us we got in before the rush. Fulled we set of on the return Colton to Bilbrough then Long Marston to Tockwith then towards Cattle, Hammerton , Whixley, Thorp Underwood, Ouseburn, Marton at Sandy Bank we said bye to Martin then it was into knaresborough where we said bye to Johnathon then we all had the pleasure of going up Mother Shiptons to the golf club, since i started recoding rides on Strava I have returned this way over 110 times it never gets any easier. Trevor and Paul went up Knaresborough road and Mark, David, Darcey and myself went Bogs Lane home for the second have of the first rugby match. 55miles 2165ft and a brisk 16.7mph. Grant 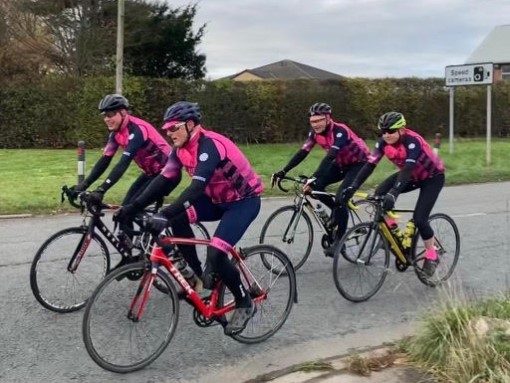 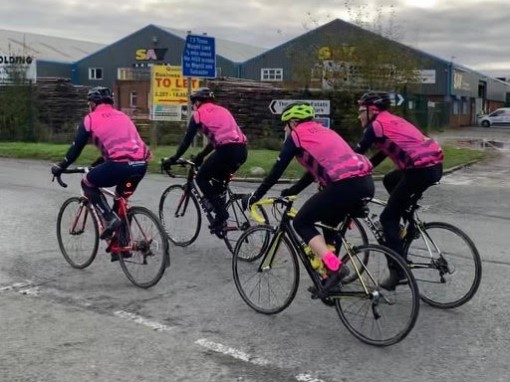