With a pre-arranged rendezvous in Ripley I offered to lead as far as Ripley and do the ‘old Brearton loop’ so off we set.
We made it to Ripley for 10:56 so joined the outdoor service in Ripley village. Here we said our goodbyes with Sarah, Peter and Paul doing the additional bit through Holly Bank Woods to Hampsthwaite and back into Harrogate. Lovely ride on a wonderful crisp morning. Jill J 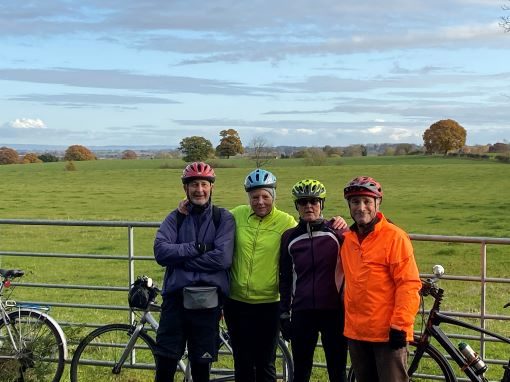 What a gloriously sunny morning – no rain, no wind- a perfect day for an Autumn ride! Five of us sped off to Low Bridge to assemble and regroup there. Here, Mike C, with his’ special power’, was ‘volunteered’ to take one group.

We arranged to meet up in Boroughbridge. It’s a pleasant, relatively quiet, route to Arkendale and beyond. Geraldine and Corinne saw us safely across the road at Ferrensby. We turned to Lower Dunsforth as it was approaching 11.00am, so stopped for a minute’s silence there.

Back on our bikes we approached Lower Dunsforth just as Mike’s group were about to set off again. It turned out that Mike’s bike had led them round by Great Ouseburn. We rode as quietly as we could through Lower Dunsforth , heeding the notice on the outskirts of the village. As we rounded the bend towards the village church, we saw the road was full of people, including lots of cyclists. It turned out the church was just finishing their remembrance ceremony supported by a large crowd of Cappuchinos.

And so, onwards to Boroughbridge. Oh no!, people were sitting outside ‘Plenty’. Geraldine checked and reported it was full . Keith popped down to Gilchrists- the same story. So, it had to be Morrison’s! There were a few ‘murmurs’. However, we all left happily. It had been efficient service and food and drinks had been okay (plus the bonus of as much tea and coffee as you wanted)

Most people decided on the full route back by Roecliffe and Lingerfield. Paul B, Geraldine and Joe, took the quicker route.  It was a fairly swift ride unhampered by too much traffic. Towards the end, the sun disappeared, but all in all, a lovely ride. Thanks to Mike for taking a group, and Paul and Brian for back marking . Alison N 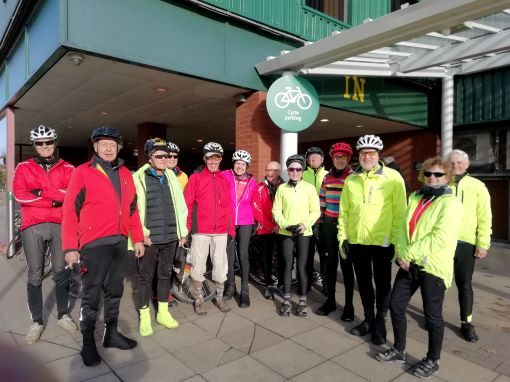 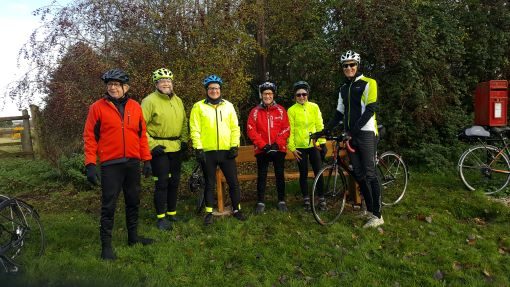 Well that was an adventure! It was billed as 40 miles but Ride with GPS said it was only 34 miles. So I asked if anyone had any interesting deviations (there’s a thought to conjure with). The deviation we did wasn’t exactly what I had in mind.

Our target was to get Liz F back by 3 for her roast beef lunch – and we did it. Although it was cold, it was a lovely day with autumn colours and lovely views. Nine riders set off through Burn Bridge, Kirkby Overblow and Castley.

Being Remembrance Day, we knew we could be held up by Remembrance Services en route. It looked as though they were about to close the road when we went through Pool. Then up Creskeld Lane, a road not travelled by many of us before, we stopped for a minute’s silence at 11.00. Rob guided us around Bramhope to avoid the War Memorial there – too cold for ill-clad cyclists to stand around. Then it happened. We missed a turn and ended up doing a tour of Guisely and Yeadon, sampling the delights of the main roads round there. We went a long way round Yeadon Tarn but never saw it.

Now, not many people have cycled underneath a Boing 737 taking off just 15 feet above them. We were in the tunnel at the airport and it was very loud. We took the back roads to Otley and had lunch at the Playground. The bacon sausage and egg sandwiches looked fab.

Three left us in Otley and the rest of us continued up Farnley Lane, then to Leathley, Almscliffe Crag and back home. With the detour we did 39.8 miles and my Garmin said we climbed 1037 metres, 3402 feet. Steve W 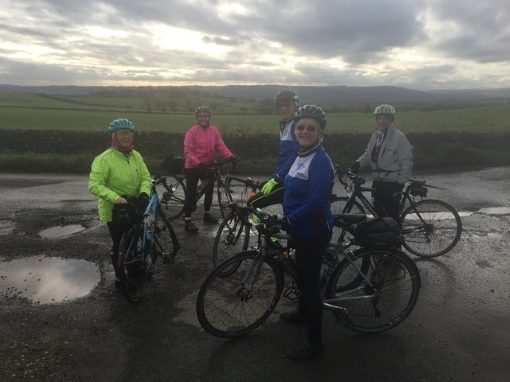 There was a decent turn out at Hornbeam despite the perishingly cold temperatures, and after the usual bit of sorting out most folks had left when the remaining four of us finally agreed to do the Medium plus route to Yeadon Tarn, but with Norwood Edge included on the way home “just because”. We soon warmed up a bit and passed the main group before stopping to adjust kit and passing them again. It was a lovely run down to Pool and then a decent climb up Creskeld Lane to make it to the Bramhope Remembrance Day Parade in time for 11am. We got off our bikes and joined the throng to pay our respects before retracing our steps to get around and on to Yeadon Tarn, which most of us had not visited before. Lots of model boats were spotted, including a battleship. Each to their own I suppose.

There then ensued a discussion about cafes and in the end we settled on the Cheerful Chilli at the top of the Chevin descent. Some of the party were devastated to learn it was vegetarian only, so no bacon sarnies but hummus and falafel wraps instead – a first world problem if I ever saw one. The long, fast descent to Otley was enjoyed by all except Eric as his bottle cage fractured and he nearly lost his bottle in more ways than one. We ploughed on towards Norwood and found Julie, who was having a bad day after a mudguard related dismount incident, but she gamely joined us and up the climb we went. Little Almscliffe flew by and we rolled back into Harrogate down the Otley Road after a grand day out. Vince G 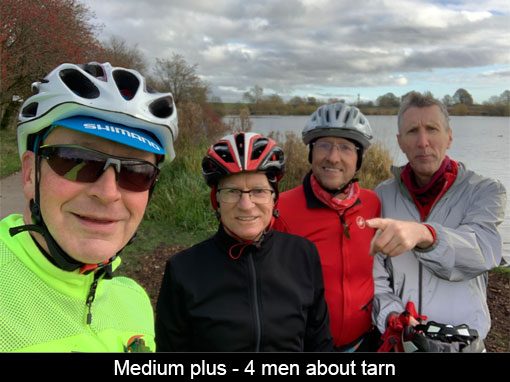 About half a dozen riders coalesced around yours truly to discuss the various options for today’s ride. Richard L was hors de combat after an incident with his dog. Richard expressed a desire for a flattish ride so it was off to Easingwold, yet again. To add some interest to the ride we left via Low Bridge, this at least avoided the road works on Boroughbridge Road. By the time we reached the crossroads outside Alne it was nearly 11 o’clock so we waited and observed the “two minutes silence”. As per the previous Wednesday’s ride I decided we would approach Easingwold from the Tollerton, Cross Lanes and Huby direction.
Arriving in Easingwold we seemed to be at the end of the Poppy Day Parade but it was only the start. Easingwold seemed to be an hour behind everyone else. On leaving Easingwold a rider ahead of us dropped a beer bottle he was carrying and it exploded into several large shards of glass. We felt obliged to stop and help him clear up the mess, mainly for the sake of other cyclists.
The return route was via the Husthwaites, Sessay and Thornton Bridge, Knaresborough and home. A remarkably incident free ride, in that we did not lose anyone or mend any punctures. PCJ 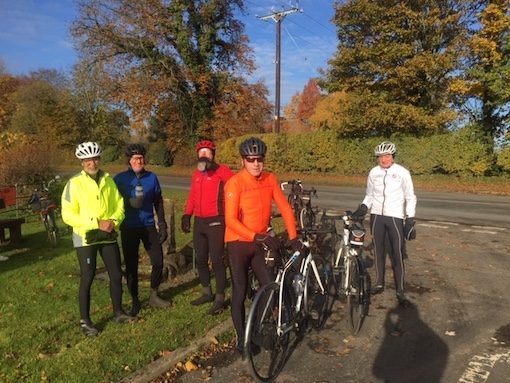