The ride itself is madness – 113 miles to Tan Hill and back via four gigantic climbs – but made more so this year by the madness of the Mediterranean weather – 30 degrees measured at Five in the EVENING.

2 Daves, Trevor, Richard and Michael joined me for the 8am departure from Hornbeam and the weather only really got hot after the Grassington brunch stop. The climbs of Fleet Moss and Buttertubs were therefore hard and sweltering but followed by a good late lunch in Thwaite. From there the climbs to Keld and Tan Hill seemed to me to be the hardest yet but we made it and enjoyed the quick mainly downhill section to Reeth and tea in the Dales Cycle Centre just before they closed.   The final climb above Grinton was in almost windless conditions – making it extremely hot and we needed a length and deserved rest at the top.

The homeward section through Middleham, Masham, Ripon and the Ripley Greenway were at a tremendous pace as home beckoned and the fierce heat finally dwindled.  Great ride, great achievement, wonderful views and some good chats. Highly Recommended (M Cavendish) 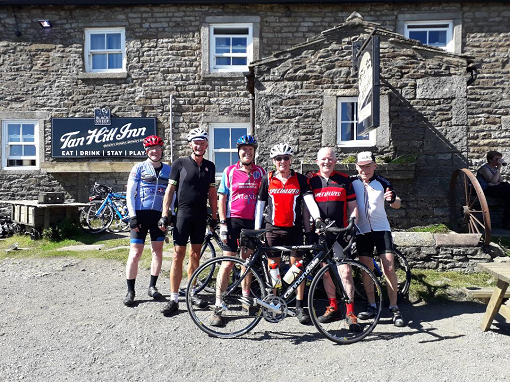 Phew, wot a scorcher ! 9 takers for a gentle loop to the east today, being Mike, Nick & Fiona, Liz, Diane, Paul B plus Chris & Chris and myself as nominal leader. With the welcome addition of Al Davies at Low Bridge, we headed out to Farnham. Soon, Al, Nick & Fiona went on ahead at a slightly brisker pace, with the understanding that we’d hook up again at coffee. All smooth on quiet roads through Arkendale to Gt Ouseburn where Paul found that the plaque commemorating the WW2 plane crash had been “edited”…. On round to Tancred for a coffee and bacon butty stop where we did indeed meet up with the front runners. Getting a bit hot on the homeward leg, we took a fairly relaxed pace. Paul left us at Whixley but sadly soon scored a puncture.(Home safe if delayed). The rest of us toiled up through Follifoot leaving a trail of melting cyclist, splitting up at the Showground. A grand day out, if a bit warm at the end. 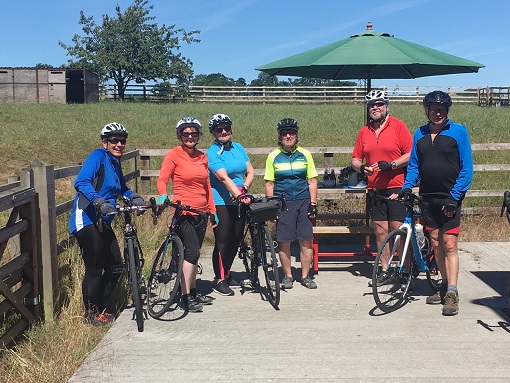 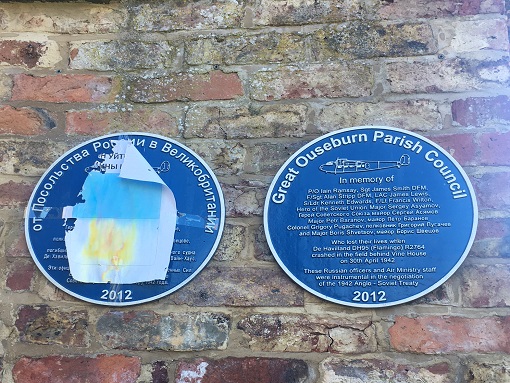 Pretty warm day up North, so I took this into account when doing my second impromptu route change for the 9 riders keen to make the most of a fine Sunday morning; the first change came about as Sophie’s fridge break-down necessitated café closure until next Thursday whilst awaiting the spare part, so we opted for Mackenzie Farm Shop.  We regrouped at the top of Little Almscliffe and were soon joined by Mrs Graham and 2 friends for the group photo.  We then headed down Wydra Lane and up Cobby Syke then Meagill Lane for the beautiful summer views with hardly a glimpse of the beloved clouds !  Unfortunately our efforts were not rewarded by terribly efficient service at Mackenzie’s plus a terribly wasteful use of take-away materials because we were sitting outside.  Hey-ho, could do better…  Off again up Menwith Hill Road and straight down into Hampsthwaite forsaking the planned challenge of Swincliffe hill for another day – no dehydration on my watch thank you !  On the home-bound strait, the first segment of the group peeled away at the Lund Lane junction, the second at Bilton and 3 of us arrived safely back in Harrogate after a jolly good effort all round of a slightly further than expected ride of 28 ish miles and 1,750ft.  Well done everyone, especially newbie David and James for back-marking; thanks for nice company and for going with the flow on the route change. Yvonne D. 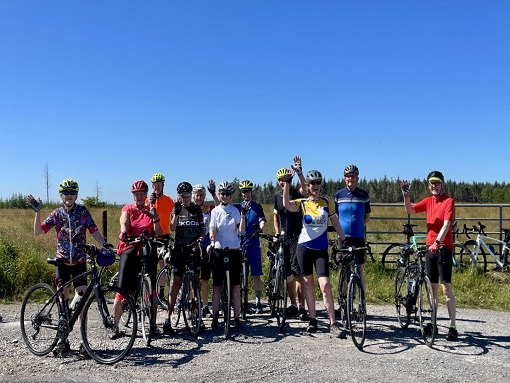 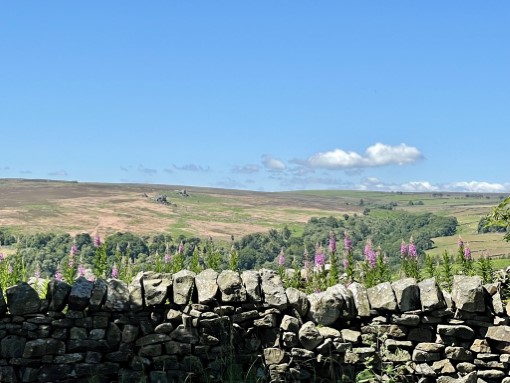 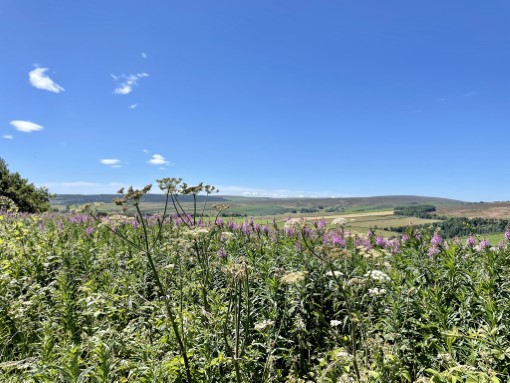 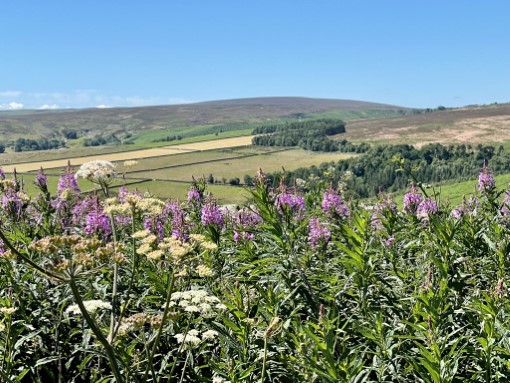 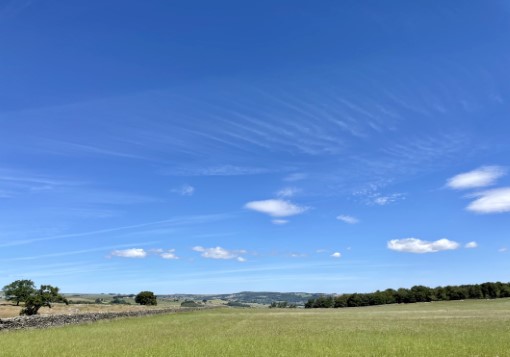 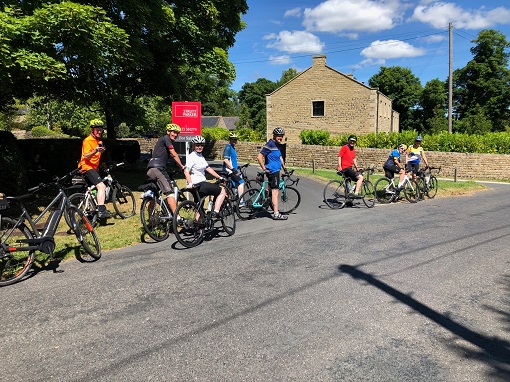 Numbers seemed reduced today, possibly because of the draw of Wimbledon or possibly because of dire warnings from the government to small children, pets and pensioners to stay indoors on account of the heatwave.  However a group of the Sensible Seven set off, determined not to be confused by any mirages that might wobble up before us.  Helen and Douglas, Dave W, Steve B, John and Peter J were my eager team.  We all admired Dave W’s summer jersey – I had to do a double take every time I looked round because he looked for all the world as if he had just burst into flames!

The Greenway was cool, flat and shady and for the first couple of hours it was really very pleasant with high hedges giving plenty of respite from the sun.  We sailed through Markington, Bishop Monkton, Roecliffe, Boroughbridge and Skelton but three miles out of Ripon Helen sprang a puncture in her rear tubeless tyre.  It was more of a split than a puncture so although she had a very snazzy looking device to plug the hole it was a bit of a round peg in a square hole moment so, game over!  The plan was for Douglas to head swiftly back to Harrogate to collect the car and rescue Helen.  Hope all went well.

We stopped at Tate’s Garden Centre where the Fast Boys and Girls were just finishing their lunch and plotting to “shorten the route a bit”.  On further interrogation this meant taking the “shortest route possible” back to Harrogate.  We all had to admit defeat in the face of soaring temperatures and tarmac melting roads.  The government was right after all!   This meant we could enjoy rather a leisurely lunch in a shady spot.  I did try to start a conversation about who the next leader of the Conservative Party might be but was met with deep sighs and eye rolling so, instead, we had a really pleasant chat about the comfort of a really good base layer (that’s a vest to you and me), even on hot days.  Watergate Lane and Ripley was the route home, enjoying the cool breeze of the downhill bits, and hugging the shade at the side of the road everywhere else with a final “forest bathe” on the shady Greenway.

All in all a very pleasant day out in happy, easy going, supportive company – not a treacherous snake anywhere in sight.  Garmin says 41 miles. Helen T 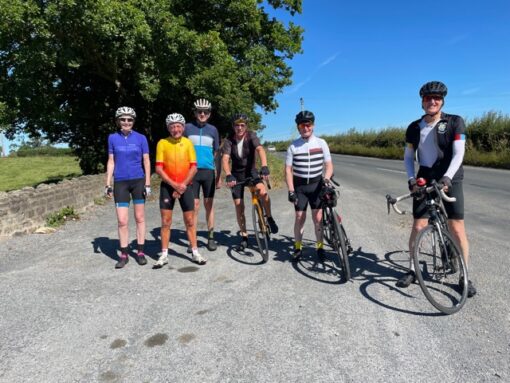