“I got my electric bike from Chevin Cycles at the end of October this year. Geraldine had been pushing me for some time to get one, as I was finding it difficult to keep up with her on her carbon Ribble. It’s a Cannondale Synapse Neo 2, with a 500Wh battery and a Bosch motor and drop bars : a tourer, really. I’ve done about 300 miles on it, and it’s a hoot. Very responsive, and not only can I keep up with Geraldine, I can leave her for dust up the hills if I choose to (surprisingly satisfying…). Yes, it’s heavy (about 21kg with saddle bag, pump, rack and kickstand), but I can still take it up and down the cellar stairs without too much difficulty. It probably has a range of 50 miles worst case, 100 miles best case.  What’s not no to like?” 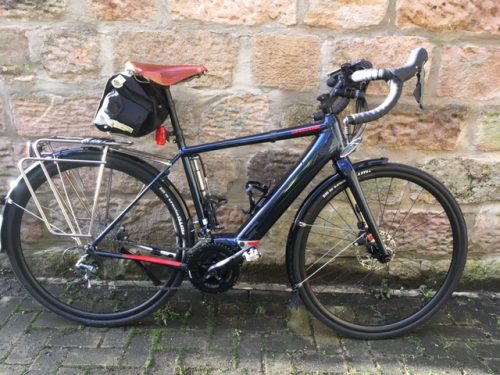 “I recently took the plunge and bought an Orbea Gain e bike, I have been using it for about six months now, mainly using  it for longer rides and even riding it with no assist at times.
The biggest difference I’ve noticed is the way I feel at the end of the ride, nowhere as tired as I used to feel, but knowing I’ve still done a ride. When using the bike you definitely get out of it what you put in.
The range of the bike is listed at about 62 miles. I tend to ride eco mode ( lowest power assist) and tend to get a range of about a 100 miles, obviously that is me doing a fair bit of work. It certainly has put a smile on my cycling face. The feeling of having a permanent tail wind comes to mind.
I attach a couple of photos of the bike. It is the aluminium frame with a 105 group set.” 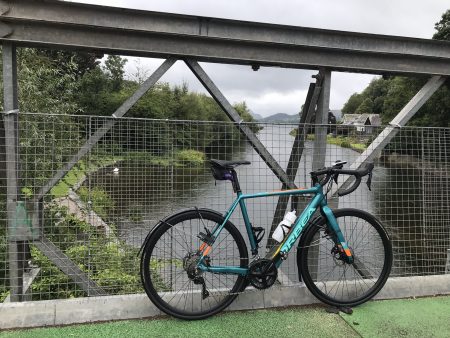 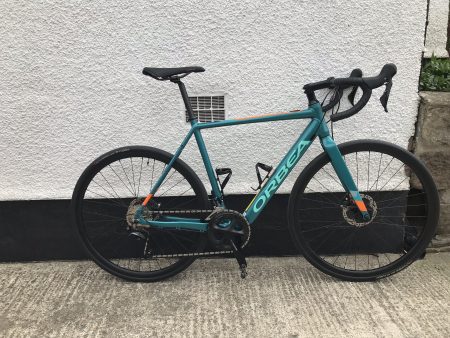 “Further to the request for members’ experiences of ebikes in November’s newsletter, please see my thoughts below.

Both are good, but they are not equivalent options.

Has a powerful 300w motor and a max power output of 225% of pedal power.
Battery can be removed for charging.
Handlebar display with four power modes plus a walk mode.
The weight of 25kg is too heavy for regular transport by car or train or for touring.
However, its power and load bearing capacity make this bike ideal for commuter/shopping trips, or for steep climbs at high speed!

Panasonic battery mounted within downtube with motor on rear axle.
Battery cannot be removed for charging, so bike has to be situated near power source.  A removable battery extender can be fitted but these are expensive and add weight.
3 adjustable power levels giving up to 100% of pedal power.
It’s weight at approximately 14kg makes it ideal for touring (provided you are confident of finding a power source!) and for day rides.
Power button mounted on top tube is not as user friendly as a handlebar display.

How Long’s a Piece of String?

Of course both bikes can be ridden without assistance but the question I am most frequently asked (apart from “do you have to pedal?”!) is “how far can you go”?  And certainly FORO (Fear of Running Out) adds a certain frisson to any ride!  It is impossible to give an accurate answer, and mileage figures from bike salesmen should be treated with caution, but factors to consider include:

For both bikes, on a flattish ride and without an extender, I typically get 50 to 70 miles range.  On a very hilly ride, this will drop to 35 miles.”

Gia and I were not experienced cyclists when we started Wheel Easy although we had cycled through childhood and at university and enjoyed sporadic rides with our young family. Wheel Easy opened up a whole new life of short rides, long rides, epic rides, friendly rides and cycling holidays. After we moved from Pannal into Harrogate in 2010 cycling became our everyday means of transport.

In those days just one Wheel Easy member used an electric bike. Peter McLean was a kidney transplant patient for whom an ebike was essential. In 2014 I had chemotherapy and followed his example. We had a motorhome and needed something that would fold up in the van. A Brompton seemed the ideal solution. We went to York on the train, bought a Brompton at Cycle Heaven at the station, and took it straight to Electric Transport Shop on Fossgate for an ebike conversion. A week later I collected it and rode it home, running out of battery just by Pannal Golf Club. I had to walk up the two remaining hills but it was a useful lesson and since then I always recharge the bike battery after all but the shortest rides. Later I bought a second battery, giving me an effective range of 40-80 miles, depending on terrain. I’ve ridden it up Buttertubs and Park Rash, taken it on the train and on many buses.

Small wheels do have their drawbacks. You feel all the bumps, and cattle grids are a challenge. Eventually I decided to invest in a full size bike and in 2016 bought a Bergamont from North Yorkshire Electric Bikes in Knaresborough. It is very comfortable, has eight hub gears and a Bosch battery with four power settings which can keep going for almost 100 miles on a relatively flat ride. It is step through which is a good thing as the 26 or so kg weight might be a problem if I had to get my leg over a cross bar. Otherwise I don’t notice the weight thanks to the motor. I use it for almost all my rides from home, for leisure, shopping etc. It requires a bit more effort than the Brompton which is powered by turning the throttle grip. That system was banned on new bikes sold after 2015, which must be pedal-assist. This is fine with me as it means I still get a light workout.

These bikes have enabled me to keep cycling. I’m convinced that electric bikes, which now come in all sorts of shapes and varieties, are a key part of the transport revolution which has to come.