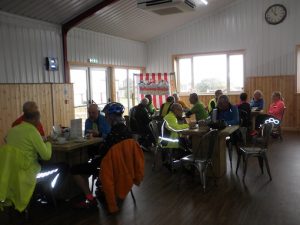 A much better morning, nothing like the rain on Sunday! The sun was just starting to break through the clouds. There were 17 Wanderers ready to start, Zoe lead 5 riders off first at a slightly faster pace and the others followed on. Just as we got out of Hornbeam we met up with Edna a new Poddler, who’s train had been late, so she missed the Poddlers after they set off. She joined us but in discussions with her she did not want to hold us up, she rode with us as we set off towards Rosset and down Harlow Moor Road up Oakdale hill, to the roundabout. Edna decided to leave us and make her way back to Beckwithshaw and back towards Harlow Hill, but she will be back with the Poddlers in a fortnight. A nice steady ride up Penny Pot Lane and past Menwith Hill, where it was decided to go down Stumps lane, a rider left here due to the cycle head set becoming a little loose, Dennis left at the toll bridge to go back through Hampsthwaite. Here we met up with the Poddlers as they crossed the bridge and soon passed th

em on Stripes Lane after explaining about Edna. We stopped for coffee at the Brimham Activity Farm

meeting up with the other 5 riders, also Mike Wills had driven up and was waiting for us for a coffee and a chat to us all, everyone was pleased to see him and wished him well. Then it was past Brimham Rocks, down past Rabbit Farm, Ripley and the Greenway home. A good steady ride in pleasant Autumn weather. 31 Miles. ChrisR

Steve Wright’s Away Day A Group– 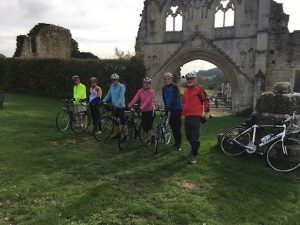 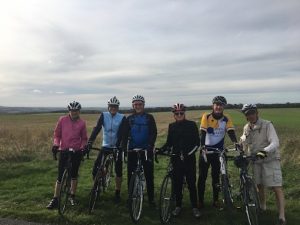 An “A”Group of nine riders led by Steve assembled eagerly anticipating this latest away day ride with the prospect of great weather after early mist. Little did we know that the next 20 minutes or so would see a dismantling of our team which would not be fully corrected.
Firstly, a multitude of Garmin users unanimously agreed that we had started the route in incorrect circuit rotation, but alas too late to prevent a breakaway of Andrew & Vanessa. Taking responsibility, Steve set off in chase, impressively severely uphill at that, in the expectation of returning to the group. Tim did wait whilst the rest made progress but returned having encountered group B insisting they were on 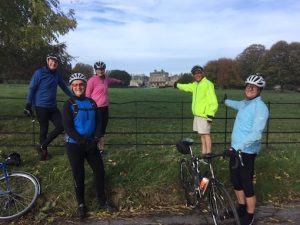 the correct rotation. Now back to six with Tim’s return & with no phone contact possible with our leader, the assumption come deduction, was that Steve might be able to return to us at Birdsall, wrong again so off we went. At last phone contact & a short wait resulted in our reuniting with an understandably bemused leader who was beginning to resign himself to completing the ride alone. Back to seven, at last, we set off to our recommended & pre-booked lunch destination, courtesy of Steve research, & we weren’t disappointed, great food.
No further mishaps & a great ride through beautiful Yorkshire Wolds villages & countryside in great company, when we did get together, as always with Wheel Easy members.
On behalf of our “unruly” & “ill-disciplined” group, sincere apologies to Steve who manfully stuck to the task of leading us & accepting his disappointment in us with great dignity & delivering us a great day out. Thanks also to Kevin for organisation & Colin for another great route making a memorable day Alan S 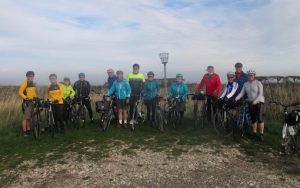 20 plus riders made their way to the Wolds for the final awayday of the series this year. We met at a Bikers (powered variety) cafe as the owner had kindly agreed to allow us to park in his car park for free for the day.
The start of the ride was in cool temperatures and there was slight mist as the two groups made their way out of Fridaythorpe. We quickly met up with riders from the first who were confused by the published route and were actually setting off the wrong way round. Upon investigation we realised the route map had inadvertently been published wrong and so there was a good reason for the confusion.
Stalwart ride leader Steve made a decision to carry on the ‘wrong’ way round whilst Colin’s group followed his intended route.
With confusion over we climbed up the valley and had some great views along the classic dry valleys and rolling landscape.
With the sky clearing and the weather improving we climbed up the valley to the top of Setterington Bank where we grabbed a group photo before swooping down towards Norton/Malton and an earlyish lunch stop.
The group split up and both enjoyed good service and food and, as always, good conversation.
As part of the group left the cafe the ‘reverse’ group arrived and took their table- good planning or what?
The return was slightly longer and had a few challenging hills which left a few of the group ‘touching tarmac’ but all this was forgotten with the brilliant ride down Thixendale- as some one said ‘probably the best valley ride in the world’. A not so brilliant hill came afterwards as we made our way back to Fridaythorpe. To finish the ride we had a steady climb which left us in need of refreshment and we were in time to grab a cup of tea etc among the many leather bound bikers who were at the cafe. As someone said ‘Leather or Lycra? ‘ -that is the question.
The reverse group had already arrived back and everyone had enjoyed a great ride in the wonderful Wolds.
Thanks to Steve and Colin for leading the groups and to Colin for devising the route and apologises to everyone for the transposition error on the route (we will learn from that!).
Thanks to everyone who turned up and to all those who have turned out throughout the year to the awaydays- planning starts now for 2019! Kevin 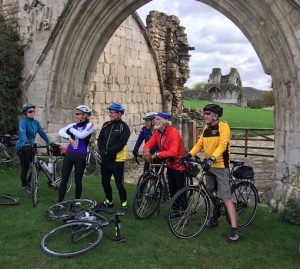 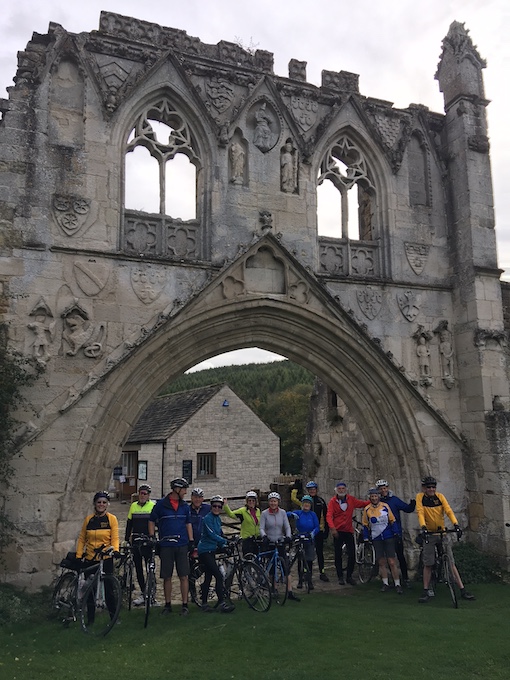 Today the decision was made to go to Thirsk via a circuitous route. All was going well as five of us left Harrogate via Low Bridge and passed through Boroughbridge, when Stuart A asked where was the first coffee stop. After being informed that we were entering a “coffee free zone” Stuart decided to return to Boroughbridge to get his caffeine fix. The remaining riders made speedy progress through Hutton Sessay, Husthwaite, Coxwold and stopping at Byland Abbey for a photo opportunity. We then took the tree-lined back road to Kilburn and then up and over the foothills of Sutton Bank to arrive at Thirsk. While we were being fed and watered we were joined by the EG’s. As three of the riders had time pressures they returned directly to Harrogate via Topcliffe, Boroughbridge and Knaresborough. Your truly decided to do a longer ride and return via Rainton, Melmerby, Wath, Ripon Spa Gardens, and Knaresborough. PCJ 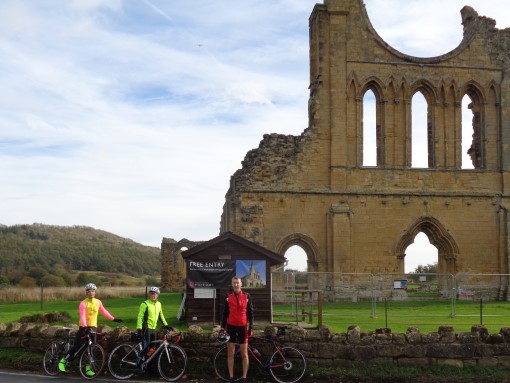 Sun out, quite warm, gentle breeze, a bearing of north-north-east set, the first stop was coffee, teacakes and pastries at Boroughbridge. Good to see Dave Watson and catch up with him. The ‘B Team’ increased the congregation and set about keeping the kitchen staff busy. 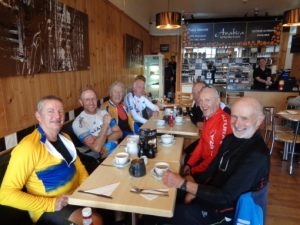 With the bearing more-or-less retained, with some meandering variations, the ‘A Team’ then consisting of seven riders took off for Thirsk, via a lower-Swaledale route passing through Milby, Thornton Bridge, Sessay, Dalton and Sowerby. Lunch venue at Arabica in the Market Place, we joined the Long Riders from Hornbeam. Many beans and some eggs consumed by the ‘A Team’, which by then had been joined by Peter B, arriving via Topcliffe.
Wishing to head for some hills at least, Eric and Peter were to add some more miles via Bagby and Coxwold. With commitments to reach, the others returned to Boroughbridge, by way of Dalton, Topcliffe, Asenby, Cundall, and Norton-le-Clay.
At Boroughbridge, Graham dropped in to The Bean for more caffeine, brack and butter, before heading for home. The remainder, Dave S (RadioShack), Dave W (Royal Navy), Geoff (Cervelo) and Tollerton Tim kept going to Knaresborough. Another great day out, about 51 miles at an easy rolling 14 mph. Graham 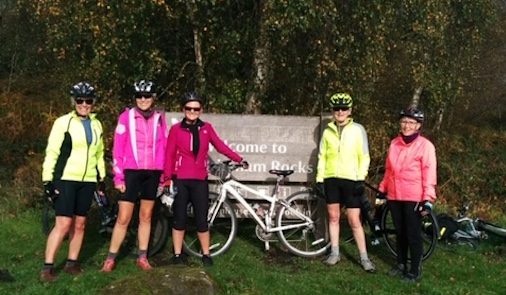 Leader was busy today (she was out for a solo early morning ride), so Monica and I were in charge. I decided on Brimham, Monica decided on Stripe Lane. So the 6 of us set off across The Stray, down the Greenway and along Holly Bank Lane. At the top, Jean was rather peturbed to hear that we were going “down” towards the toll bridge! Anyway onward and upward, while the slower Wanderer group overtook us as we turned into Stripe Lane. We eventually arrived at Brimham rocks where we had a photo call. Along, up and down, and then down, down, down to the cafe in Ripley, whereupon a lone Wanderer appeared, namely Glyn, who then caught up with Poddler gossip, as we cycled back down the Greenway. It was a beautiful day for cycling in good company. 28 miles achieved. Jen A