Thank you to everyone who came for the tenth anniversary photo today and great to see people who were there for the first rides in 2006.
We know that there were lots of people missing today so we will have another group picture next Sunday 15th May, so do turn up even if you are not riding.
It has been a beautiful weekend to celebrate and to ride in our wonderful countryside together with our Wheel Easy friends.
We gathered about 40 for the group photo at the Acorn ride and we reckon there were about 60 Wheel Easy riders all together. Great ride, great organisation and well done everyone for taking part on such a splendid day. Gia and Malcolm 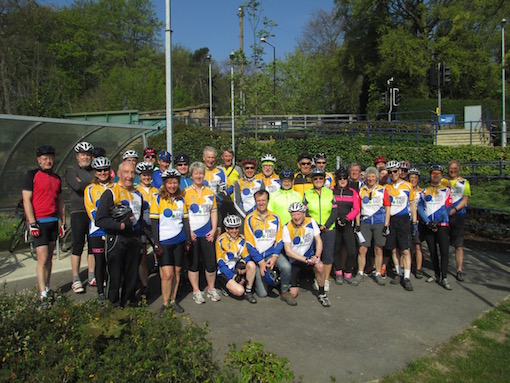 Sunshine from the start- what a perfect day for a leisurely amble round Harrogate and Knaresborough. Paul B [ welcome back] volunteered to back mark. 11 of us set off for Bogs Lane to view the redone cycle path to Bilton. Then it was a very bumpy ride till we glided down the Beryl Burton. Having carefully negotiated Bond End, we could then relax as we cycled along to Lingerfield, Farnham, Occaney [where Paul and John left us] At Staveley the consensus was to include a loop to Arkendale. Dennis departed soon after Staveley, so the 8 ladies continued to chat and cycle until we found ourselves at the end of Abbey Road. It was definitely coffee time so we proceeded to the caravan park café [lovely baking]. After a brief discussion we decided to go home via the Beryl Burton. Riverside was very crowded, but we wove our way through and then the final challenge. It was a beautiful spring ride on a lovely day. Thanks to everyone for the company and chat. Alison N
[no guesses as to why we’re all standing behind the seat!] 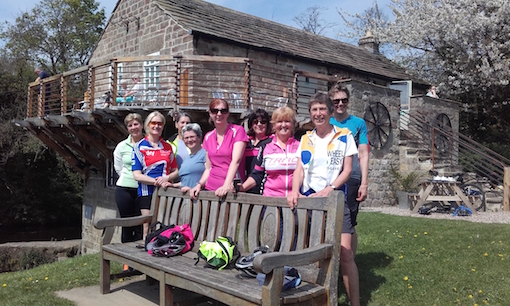 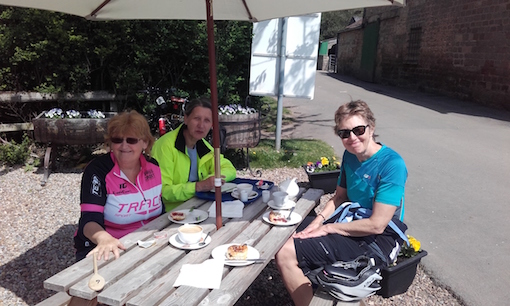 With no designated leader for the medium ride today, a group of 10 left hornbeam with myself, Peter and Jeanie combining our knowledge to follow the planned route. The weather was perfect with unbroken sunshine and hardly any wind.
Out past the Squinting Cat, through Beckwithshaw and up to Little Almscliffe where we regrouped in the carpark before heading across through Stainburn Forest. The road was quite rough where it had been repaired and when we got to the end the gate was securely locked. While we were lifting our bikes over the gate and assisting other cyclists heading in the opposite direction, Kevin discovered that he had a puncture. Repairing this allowed the rest of us to have a welcome rest and admire the view. No one felt the need to rush in such fine settings.
From this point Peter took over to lead us to the Honey Farm which unfortunately was shut so we had to continue unrefreshed past Almscliffe crag and down to Huby where we crossed the busy main road to Wheeton and on up to Kirby Overblow. After some discussion, most of us decided to avoid the dreaded Showground hill and followed Walton Head Lane down to the A61 where Kevin had his second puncture of the day.
While this was being repaired, half the group left for home through Burn Bridge led by Jeanie and the rest of us followed soon after.
Although this was a fairly short medium ride, 25 miles, we all enjoyed ourselves in perfect conditions and good company. Andrew

After 10th anniversary pictures we all set of from Hornbeam under a lovely blue sky, a nice turn out despite the Acorn on Saturday however we became 7 (Barbara, David, Gill, Julie, Martin, Rob, and Tony) at Low Bridge as one dropped back to one of the gentler paced groups. So on down to Farnham through Staveley and into Boroughbridge where we had a nature,”suncream (in “May” whatever next!!) and layer reduction stop due to the near perfect conditions because of the pace we,…well actually it was Rob’s idea as if a massive Audax ride the previous day wasn’t enough decided to add on a loop through Norton le-Clay and Cundall but everyone seemed happy with that.
Passing through pretty countryside rapidly turning green in the warm week we have had…about time I hear you cry! cycling over the A168 and into Rainton, such a small place it needed two pubs some lovely smells coming out of the Lamb Inn’s kitchen though. Crossing the A61 we headed on to Melmerby and Wath passing the lovely Norton Conyers estate. Arriving in Ripon we cut through the town quickly and headed out on the Pateley Road turning right to head into the hill’s and Galphay after a little bit of confusion and errrrr….direction problems we got back on track and picked up the signs for Risplith and the cafe stop, Martin left us here need to be back early so that left six of us to sit in the sun with our food and drinks we even met Simon from Veloheads enjoying lunch with his partner, he even offered to buy us all icecreams.
Back in the saddle with the ride almost over we tackled the hill just after Sawley and down the fast straight to Ripley where we split up and some headed back to Harrogate others to Knaresborough. All in all a fun day’s ride made better by the great conditions. Tony 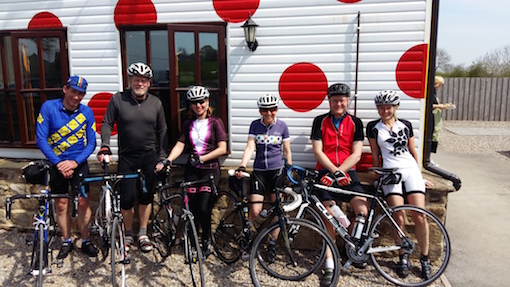 A great turn out by team Wheel-Easy.
A very sociable and friendly ride.
Chatting to team mates and others all along the ride.
Dave P broke his chain and was immediately surrounded by Wheel-Easy riders enquiring how things were and was help needed.
Fortunately, Paul in the Chevin cycle van stopped and repaired said chain before DP had time to repack his tool kit.
Considering the amount of metal DP has about his person, the chain was the easiest thing to fix.
Super weather, lots of knees and elbows on show(is summer here?), and nice food.
Dave P 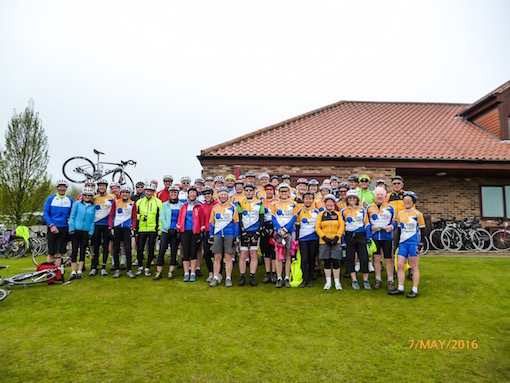 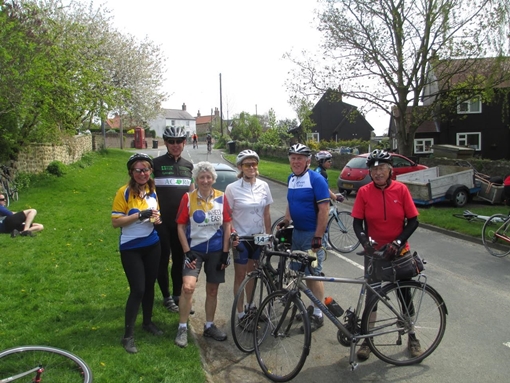 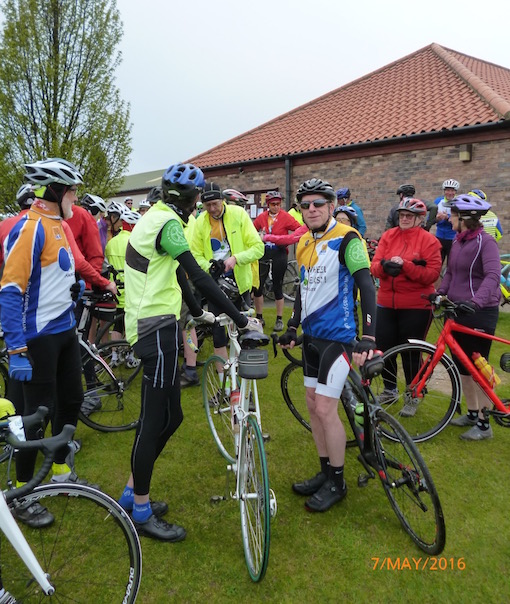 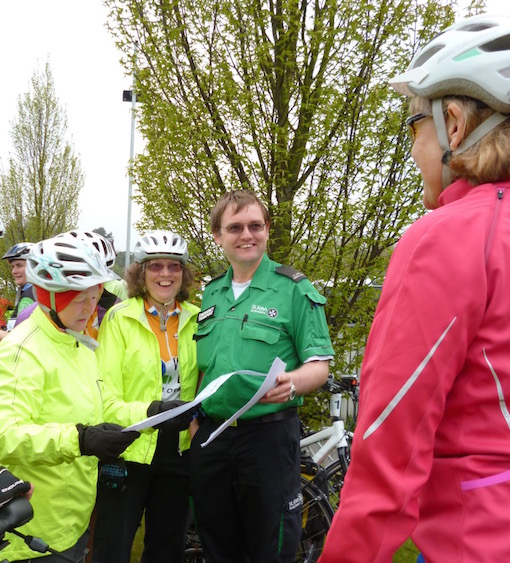 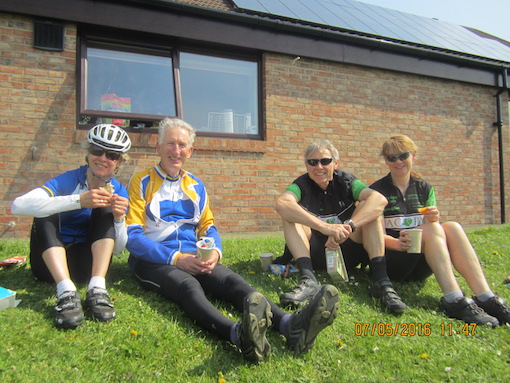 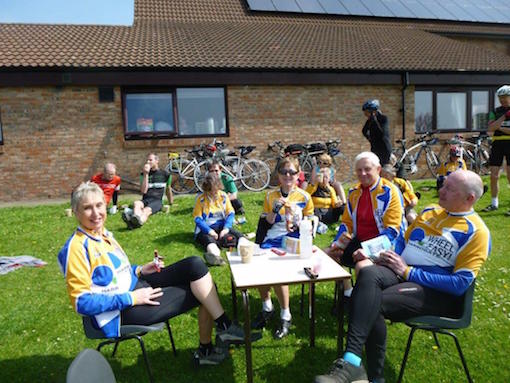 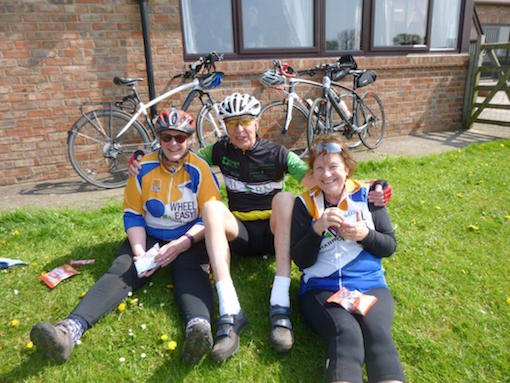 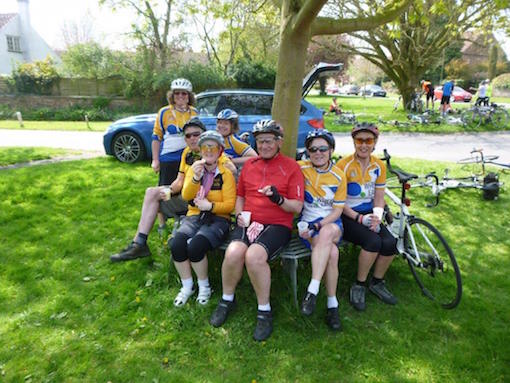 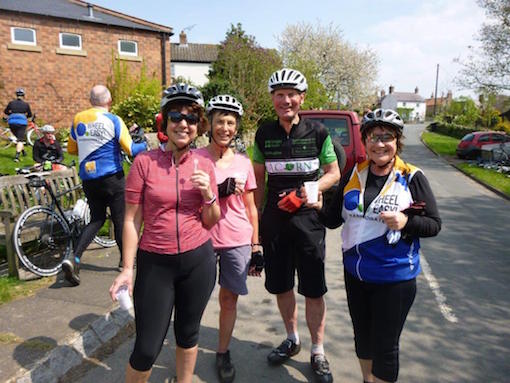 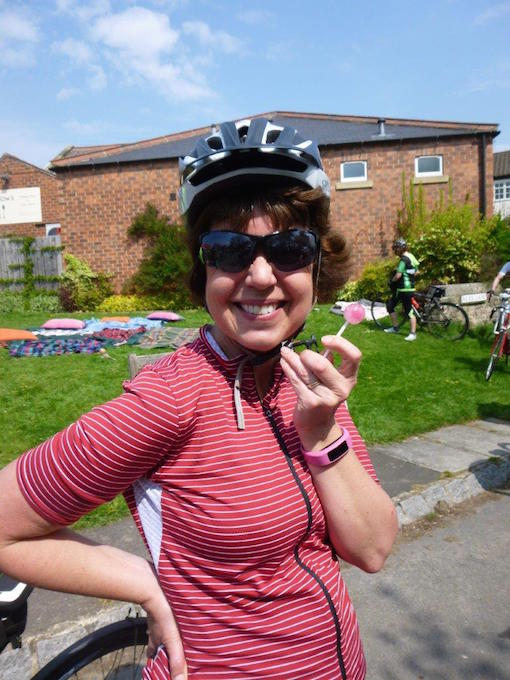 Before departing Ripley those who had completed Saturday’s Acorn ride filed their excuses and apologised in advance for leaving this ride early.
This proved totally unnecessary as all 8 completed the ride together, quite unusual for the long ride, but not surprising given the fabulous weather and scenery.
The prime object was to experience the road from Richmond to Reeth via Marske high on the northern flank of Swaledale but known to few WE riders.
We were not disappointed by the wonderful views and attractive side valleys which easily compensated for the unattractive section through Catterick en route to Richmond.
For the climb over Grinton Moor we refuelled at the excellent Reeth Bike Cafe and then it was a fast trip back to Ripon and Ripley.
81 miles with lots of climb for those starting at Ripley, 90 from Harrogate .
Congratulations John and Phill and thanks for staying with us following the Acorn ride. Peter R. 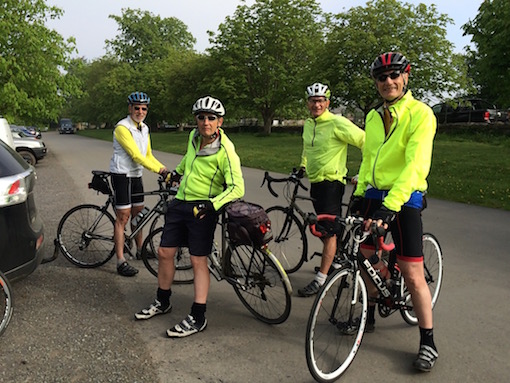 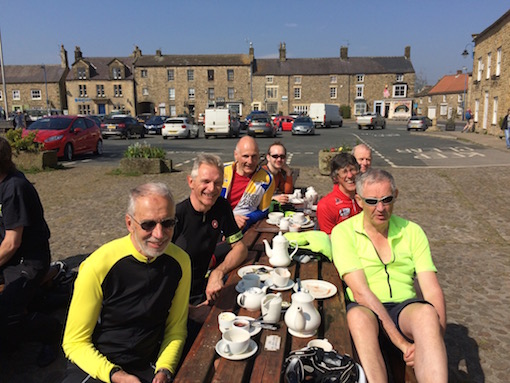 This service was inaugurated in 1926 to remember all those cyclists who lost their lives in the First World War.
In the early days of that war many men formed themselves in to “Pal`s” battalions, which consisted of men with similar interests, sporting or social.
It is run by the CTC (sorry just for now I will keep the old name) from all over Yorkshire, so jerseys labelled CTC Teeside, CTC Hull, any others could be seen.
The format (though not strict) is groups and individuals from all over Yorkshire converge on Coxwold Village Hall for homemade sandwiches and cakes, this is open from 11-00am and the Church Service
starts at 1-300pm , causing Eric to comment 2hrs 30 mins for eating, does Dan know about this?.
After the service the majority tend to return to the Hall so as to not let that delicious baking go to waste, monies raised do go to help village projects.
It was good to see old friends from CTC York who I used to cycle with before the formation of Wheel-Easy.
On the subject of old( and we are all heading there) and the age range in the hall, Eric commented that the EG`s could be placed at the lower end.
After that we had to watch our P`s and Q`s as the Bishop of Selby (complete in his cycling gear) came and sat on our table to eat his sandwiches and cakes (see photo).
The Vicar ran the service and the Bishop gave the sermon, but if say we had the Archbishop of York, Bishop John would have been in the Selby Bike Ride, on this day.
After the service (very non denominational and relaxed), Eric headed back home for a family Bar-B –Q/ get together, but Dave P as a true EG headed back to the Hall for more tea and delicious cake,
then a steady ride back in the gorgeous weather we had today (long may it last).
Dave P 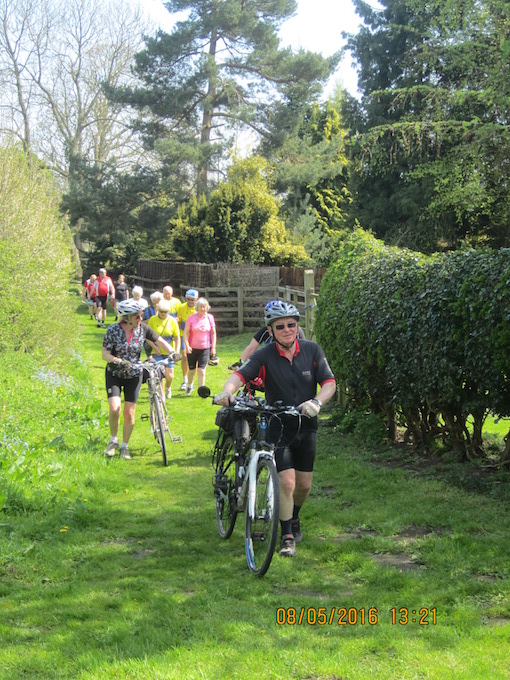 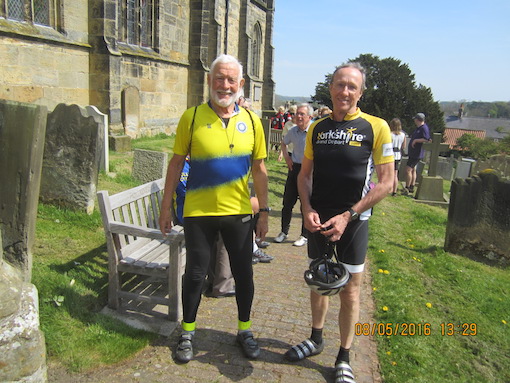 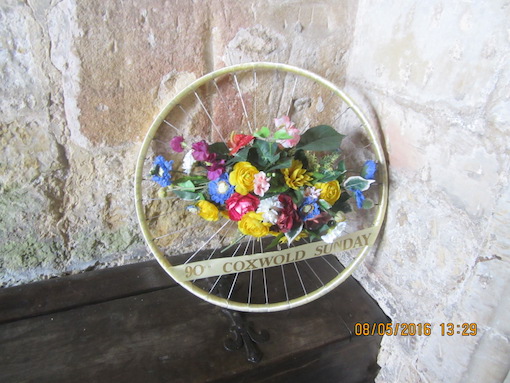 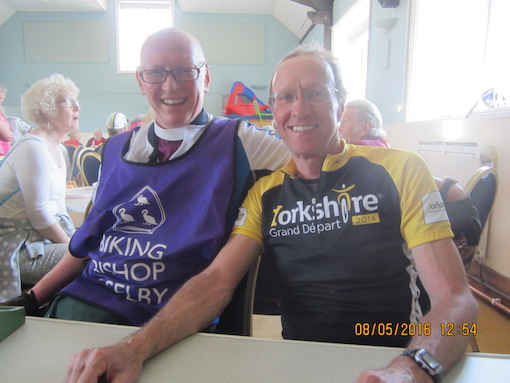 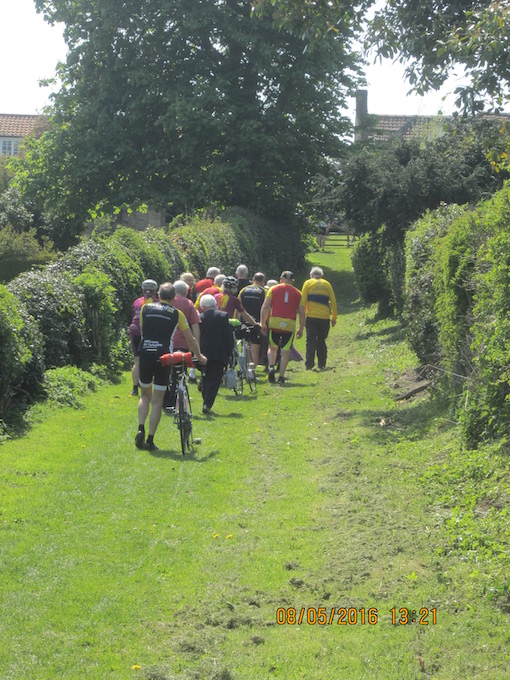 Seven riders met in Buckden, which I think is a record for an off-road ride.
A very hilly morning took us over Stake Moss to drop down to Semer Water, just to climb out the other side to the Roman road. At the top of Fleet Moss most of the group elected to take the tarmac straight down to Langstrothdale and Buckden, but Peter and Steve stuck it out to the end, and we were rewarded with sights of Ribblehead viaduct and the 3 yorkshire peaks from Cam Fell, before taking the forestry track to Langstrothdale.
Special mention for Debbie, the first female Wheeleasy member to venture out on an off-road ride.
Photos…Semer water from 2 sides, and a biscuit break on Cam Fell end….Ribblehead viaduct in the background, Ingleborough and Whernside to the left and right. Colin
Thanks to Colin for leading an excellent off road ride through beautiful Wharfedale today. Here are a few photos I took on the way. Debbie & Colin Naylor 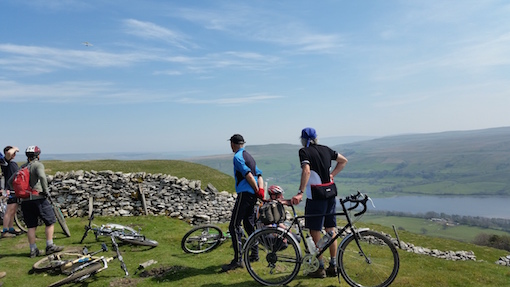 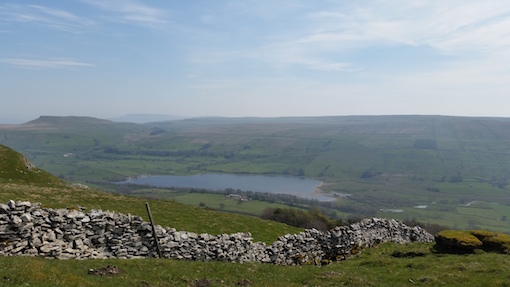 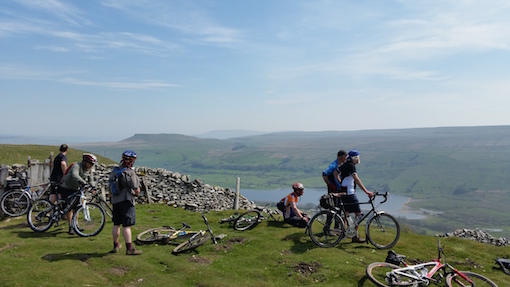